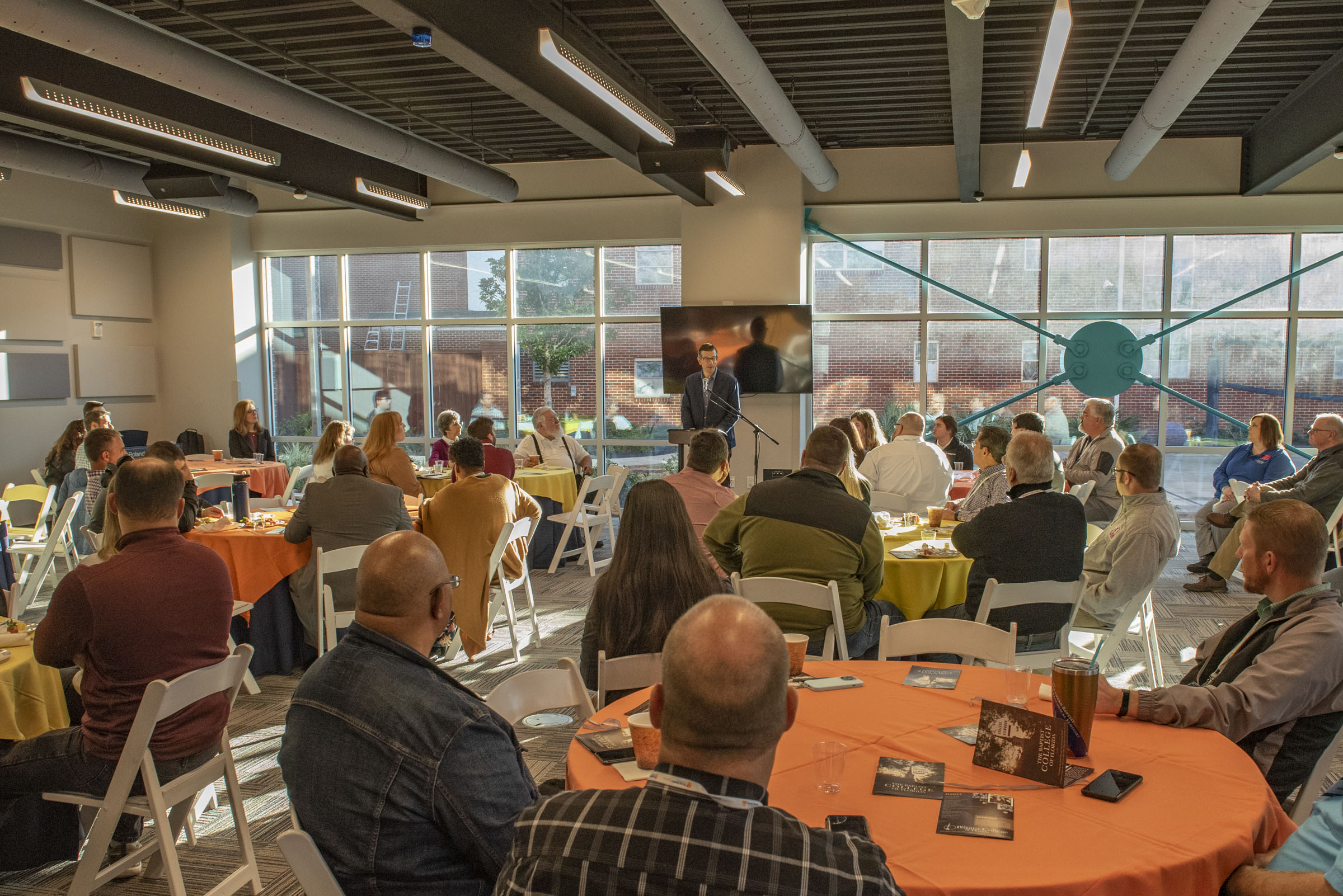 Photo Above: Clayton Cloer, Baptist College of Florida president-elect, introduces himself to students and alumni.

PENSACOLA—Alumni and students from The Baptist College of Florida gathered Nov. 14 during breakfast to honor Thomas Kinchen, who will retire after serving more than 30 years as college president, and to welcome president-elect Clayton Cloer.

“Thank you for coming out this early morning to keep company with me and the new president-elect,” said Kinchen.

In a brief, heartfelt speech, Kinchen recounted how God called him out of the mountains of West Virginia in the ‘90s to lead the school that is “changing the world through the unchanging word.” Although there have been difficult days, he said, “The worst days in God’s will are better than the best days outside of His will.”

Kinchen led the college’s expansion and growth for three decades and announced in November 2021 his plans to retire by Dec. 31, 2022.

Founded in 1943, the college is an institute of higher education designed to train and develop Christian leaders for the church and marketplace through offering 19 undergraduate and graduate degree programs. The college is a cooperating ministry of the FBSC, operating campuses in Graceville and Central Florida, with plans to establish a third campus in Miami.

The room erupted into applause and a standing ovation as Kinchen took his seat once again and invited BCF president-elect Clayton Cloer to address the group.

Cloer, who will begin his tenure as the college’s seventh president on Jan. 1, introduced himself to the breakfast group and shared his vision for BCF to be the higher Christian education partner for the Florida Baptist Convention and Florida Baptist churches. It’s a vision, he said, that comes in the wake of Kinchen’s vision for the school.

One component of that vision–construction of a new campus in Central Florida—will extend the school’s reach into the peninsula. Messengers to the 2022 FBSC annual meeting Florida will vote Nov. 15 to approve the college’s name change to the Baptist University of Florida.

In addition, Cloer will continue to focus on helping students graduate without debilitating debt that can be a hindrance to going into the mission field. Already, no-cost housing is being offered to help students with higher education costs.

In addition to his undergraduate degree from Clemson University in South Carolina, Cloer earned a master’s degree and a doctorate from Mid-America Baptist Theological Seminary in Cordova, Tennessee.

The meeting ended with attendees praying over Cloer and his wife, Linda, to receive God’s guidance as they embark on this new journey.