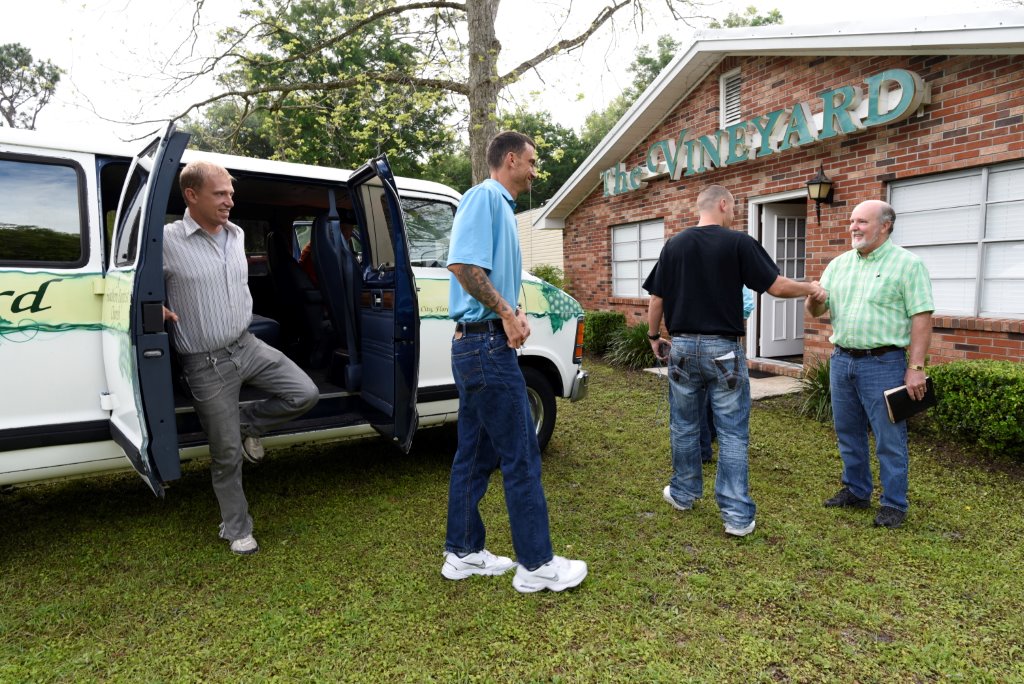 Every Sunday a 15-passenger van arrives at Lake City’s Work Release Center to gather inmates serving the last days of their sentences.

Within months—or even days—they will be released to the community as free men—having paid their debt to society.

But while serving the final hours of their incarceration, they have turned to a group of people who will embrace them, love them and shower them with Grace UNIMAGINABLE.

The Vineyard Church in southwest Lake City is standing in the gap with acceptance and generosity for these men trying to turn around their lives.

“I fell in love with the people,” said James Pruitt who was released from the work camp this past February and months later still attends The Vineyard. “They have been a huge blessing to me and have done more to help me in my recovery and rehabilitation than any other program I have ever done. This church helps me stay focused.”

Having served in the prison system for 13 years, William Tew, 36, is counting down the days until his release. “No one here judges me. They treat me like one of them. God is using them in my life.” He intends to remain in the community and as a part of the church when he is released.

The Vineyard Church congregation believes God has called them to a ministry of generosity.

At least 25 percent of their income is given away, earmarked for ministries including a local pregnancy center, a home for troubled girls, the Florida Baptist Children’s Homes and a student attending The Baptist College of Florida.

Throughout 2015, they gathered toys with a goal to fill 300 shoeboxes for Samaritan’s Purse’s Operation Christmas Child.

At Christmas members gave gift cards to the inmates to buy presents for their children. They have provided the men with work clothes and bikes so they can ride back and forth to their jobs, a requirement to participate in the work release program. They sponsored a fish fry on the grounds to reunite the men and their families away from their prison environment.

“Our church is just unusually friendly,” said Pastor Bo Hammock. “It is more about giving than it is taking. We look for ways to give to people.”

The men in the release program, who are non-violent and non-sexual offenders, find ways to give back to the congregation by helping clean the church, making repairs and serving others, Hammock explained.

“They have really been a blessing to us. And my people have been loving and receptive. We don’t treat them any different.”

During some of his time, as he does now, The Baptist College of Florida graduate worked bivocationally at the Mayo Correctional Institute, originally as a chaplain. When budget cuts eliminated his job, he took an administrative role as a classification officer at the prison.

It was when he began picking up his brother, who was incarcerated, to take him to church that Hammond began bringing other prisoners who could leave the correctional facility to attend worship.

Through a series of location changes— a local restaurant, a video store and leasing space from another church— the congregation has now found a permanent home, purchasing a church building of their own.

Located in southwest Lake City, the facility previously was used by another church as a youth activity building. The sanctuary had been repurposed as an indoor mini golf course while rooms were utilized as video and game rooms. The building was left in disrepair with broken windows and damaged walls, Hammock said.

The Vineyard members, along with men from the work release center, totally repainted, repaired and reroofed the facility to an attractive, warm and inviting house of worship fit for the King of Kings.

“This is the place God provided us and we wanted to fix it up and make it home,” said church member Paula Richards. At every location the church has met, she added, “we have always made it home.”

The building was purchased in 2014 with a $114,000 interest-free loan from the Florida Baptist Convention’s Church Site Fund, made possible through the Maguire State Mission Offering.

As a result, their monthly payments dropped from the $2,300 paid in rent “when we never had enough money to do anything extra,” said church member Jimbo Thomas, to a $300 a month mortgage payment.

“We’d much rather put that money into helping others than in renting a building,” added Richards.

A recent church service drew many of the former work release inmates back to the church, including Greg Watson, who brought his family that Sunday. He recalled that even before he was transferred to the Lake City location, a friend told him about the kindheartedness of The Vineyard Church members.

“This church is one of only two I have ever known who had enough heart to bring a van to pick up and bring us to church,” he said, as church members warmly embraced him that day.