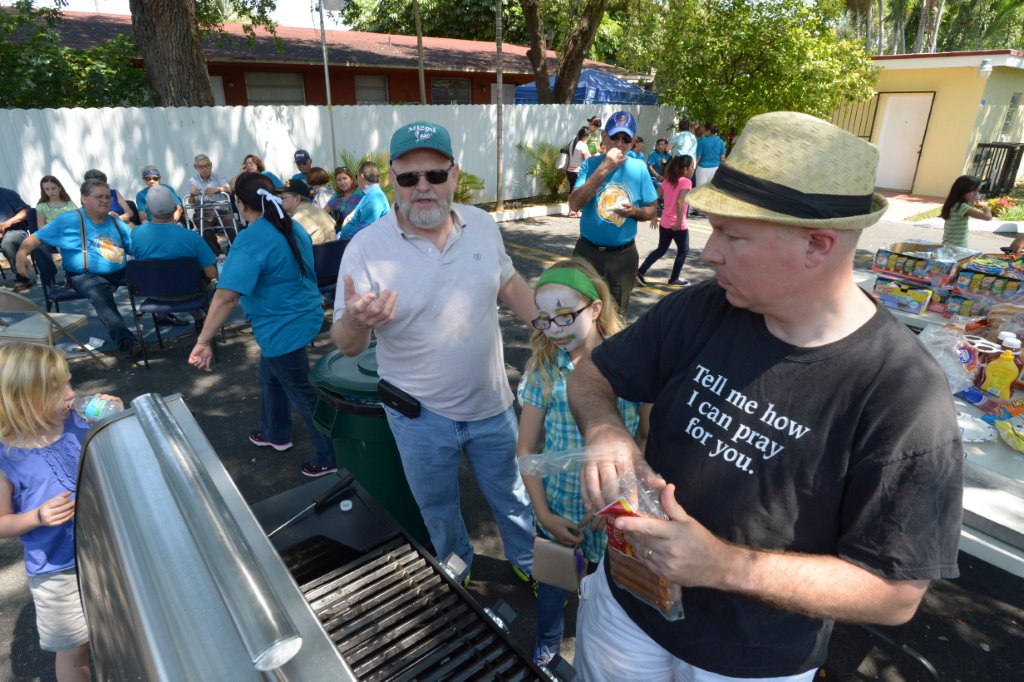 For more than a quarter of a century, Michael Daily has planted his life in Miami as a missionary fueled by a vision to serve the needy, the downtrodden and poor in this city of contrasts.

Miami is often viewed by the world as a 76-degree paradise of glitz, bling, flaunted wealth, South Beach nightclubs, bay-front mansions, flashy cars and fast boats. But it is one of the poorest cities in the U.S. with nearly one-third of the population living below the federally defined poverty level. In neighborhoods across the city exist pockets of the poor, homeless and illegal residents in need of medical care, housing and the basic needs of life.

It is a city of ethnic diversity with half of its residents born outside the U.S. and as many as 160 languages spoken in the public schools. It is a city of spiritual lostness, with an estimated 95 percent in need of a relationship with Christ.

As the church and community missionary for the Miami Baptist Association, the Midwest native who has made South Florida his home is dedicated to reaching the pockets of “the least of these” with the Good News of Jesus Christ.

Fluent in three languages, Daily has the responsibility of developing and implementing a ministry plan for individual church outreach and has involved churches in ministering together throughout Miami-Dade County.

His ministries touch the lives of migrant farm workers, refugees, immigrants and the homeless through organizing church sponsored medical and dental projects in poor communities, English as the Second Language, tutoring and hunger ministries.

On one Saturday morning, the missionary gathered many of his resources to collaborate on a “pushing back the darkness party” to increase visibility of churches in inner city Miami. It was one of several events he organizes throughout the year to help congregations make an impact in their neighborhood communities.

Working with the Spanish-speaking congregation, Iglesia Bautista Jerusalen, Daily brought together teams from First Baptist Church in Homestead, the Good News Care Center (GNCC) medical clinic and Church World Services. Collaboratively they offered food and fun, immigration law updates and medical screenings. But at its heart, the block party, supported by Cooperative Program funds, was designed to reach the community for Jesus Christ.

Using an EvangeCube witnessing tool, Amelia Eguren, a community health worker at the clinic, shared the gospel leading Jesus Calderon, a homeless man, to Christ. “The most important thing we do here,” she said, “is to share the gospel, give them a New Testament and pray with them.”

The neighborhood surrounding the church is a “true inner city,” said Daily.

Composed of immigrants from Honduras, Nicaragua and El Salvador, the community is infested with drugs, gangs and violence.

In the past, Daily has provided computers and other equipment to several area churches as a means of providing job skills for adults and after school activities for at-risk youth.

Because their income limitations prevent access to costly medical care, residents suffer with a myriad of chronic illnesses including diabetes, hypertension and congestive heart failure. During the block party, Good News staff screened participants and then referred them to the clinic or other nearby free clinics if additional care.

The Good News Care Center is a “miracle,” said Gary Johnson, director of missions of the Miami Baptist Association, and provides the clearest example of the contribution Daily has made to the Kingdom. “God used Mike to get the Good News Care Center off the ground. He was faced with numerous roadblocks, but Mike would not give up.”

Started in 1996, the free-standing clinic, located in Florida City provides free healthcare to Dade County’s uninsured population—estimated at more than 600,000 residents. In starting the clinic, Daily worked with several Miami medical and nursing schools and Baptist Hospital physicians to provide care and operate the clinic.

With as many as 800 patient visits per month, the clinic provides preventive and controlled care, collaborating with Baptist Health South Florida, its primary support, and other health care entities and businesses in Miami-Dade. By referring patients to the clinic, hospitals can avoid the high cost of seeing these patients in emergency rooms.

In 2014, the non-profit Good News clinic recorded 13,767 patient visits and provided $5.6 million in donated medical services. The clinic utilized the volunteer services of seven medical doctors, 69 specialists and three nurses to provide free health care to the needy. The demand for care is growing in spite of the Affordable Care Act, Dailey said.

The Good News clinic was started first of all to “reach people for Christ,” said Daily. “This ministry for me is really all about the ‘as you are going make disciples’ part of Jesus’ commissioning for all those who believe in Him.

“We are in contact with thousands of persons from many people groups and certainly many of them do not know Jesus as Lord and Savior,” he explained.

The gospel is shared with the patients in a number of ways: including through the “Jesus” film and other Christian films played in the waiting room; by giving away free New Testaments; praying with patients; conducting Bible studies with medical students and volunteers; and a home visitation ministry. Nearly 600 persons accepted Christ through this ministry in 2014.

As a direct result of the clinic’s patient visitation and chaplaincy program three churches were planted—Iglesia Bautista Mi Ebenezer in Florida City, where pastor Moises Robaina serves; a church that was planted in the Homestead Migrant Residency Center that now serves as a Spanish speaking congregation of First Baptist Church in Homestead; and perhaps indirectly, Families R Us, which began in a FEMA trailer park after Hurricane Andrew.

Having served in the city for 28 years, Daily speaks often of collaboration, as he has enlisted the resources of numerous community agencies, services and health care providers to work with him to accomplish his ministry among the least of these.

Florida Baptists have played a critical role in his work. As a missionary with the North American Mission Board and Florida Baptist Convention, his salary is funded through the Cooperative Program, which also supports many of the ministries he is able to provide to the churches.

Resources from the Maguire State Mission Offering have been used to fund migrant ministries, the Good News Care Center and the Florida Baptist Convention’s mobile dental unit which has opened countless ministry doors in communities, he said.

“Dozens—if not hundreds—of people in Miami-Dade have come to know Christ through the generosity of Florida Baptists’ giving to the Maguire State Mission Offering,” he noted.

“Mike Daily has loved Miami,” said Johnson, “and has felt committed to plant his life right here in the midst of all our crazy multicultural society.

“I thank God for him and his wife Ana, who now directs the clinic. They love the Lord, His Word and His people and have found their ‘niche’ in life. Miami Baptists have been blessed by the Dailys ministering to this city.”