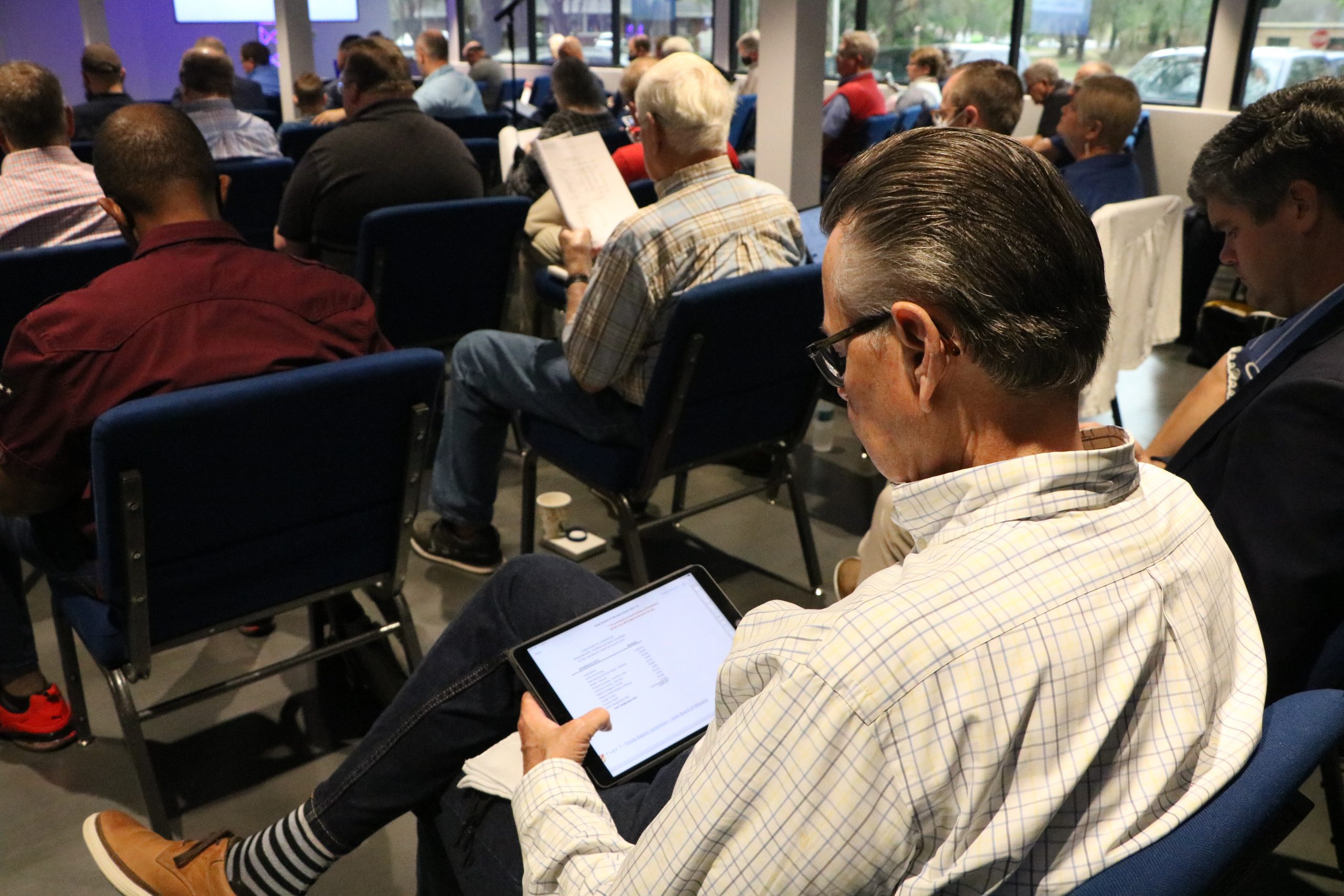 JACKSONVILLE–Looking back over the struggles of 2020, Brian Stowe, president of the State Board of Missions, declared, “In the Florida Baptist family, no one fights alone.”

Stowe noted the Convention had come alongside its churches during past year “to fight for and with our churches through financial crises, spiritual warfare and family difficulties.”

“In the Florida Baptist family, we are going to stand up and come alongside our churches,” he said.

Throughout the April 9 meeting held at the Baptist Building in Jacksonville, the Board learned of the many ways Florida Baptists linked arms to respond in the name of Christ during extraordinary times. 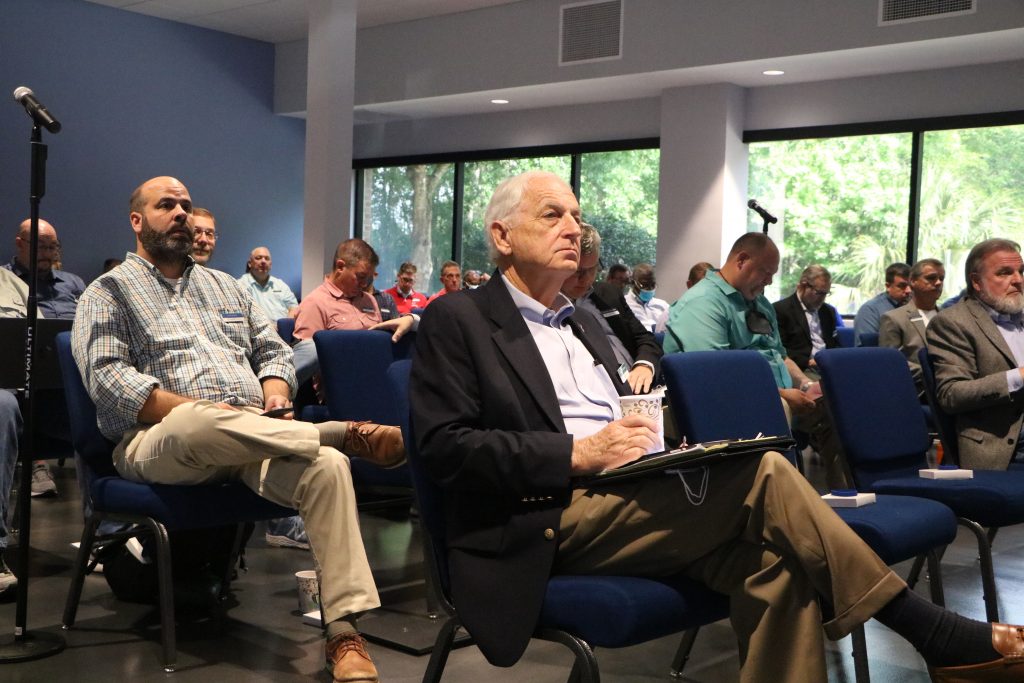 The Board heard that while the year looked drastically different than anticipated in 2020, the Convention adjusted budget priorities and expenses as the Lord provided ministry opportunities and finances. Throughout the year, as churches were faithful in their giving, the Convention assisted struggling churches with funding and ministry needs.

“God is blessing, and we are thankful for the resources entrusted to us,” said Tommy Green, Florida Baptists’ executive director-treasurer. “We want to be good stewards of all he has blessed us with.”

Grants were made to the Convention’s cooperating ministries to sustain and undergird their continued service: Lake Yale Baptist Conference Center (LYBCC), $25,000; Florida Baptist Children’s Homes (FBCH), $75,000; and the Baptist College of Florida (BCF), $75,000.

After learning that in the past five years, $3,125,319 was given to the Maguire State Mission Offering, the Board set a 2021 offering goal of $760,000 earmarked exclusively for the Florida Send Network. MSMO goals were set for the next four years:

The Board learned that with a continuing commitment to assist churches, the Convention has placed new ministry and evangelism resources on its website.

Myles Dowdy, lead catalyst for the Convention’s Missions and Ministries Team, presented an Immigration Ministry Plan, designed to support Florida Baptist churches meeting immigration needs.  Dowdy said the latest data indicates that more than 500,000 immigrants, 150,000 migrants, and 14.5 million international travelers arrive in The Sunshine State each year. “Our goal as Florida Baptist churches is to be a Gospel witness as we share the salvation of Jesus Christ with as many of these individuals as possible.” 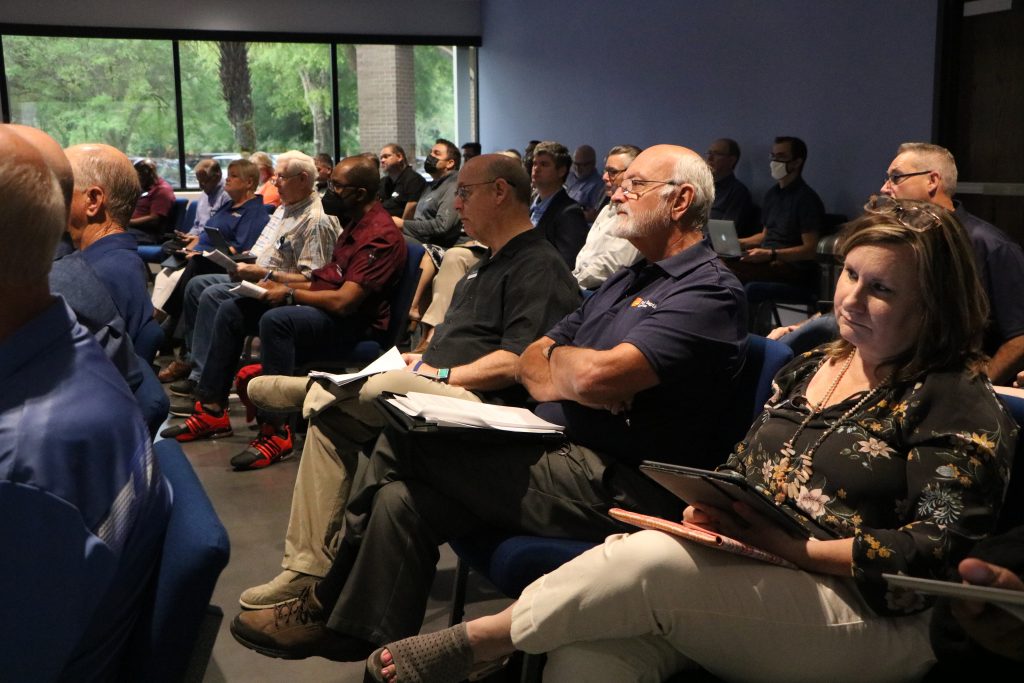 After creating a task force to study resources, Dowdy, said they discovered there was already “an abundant amount of focus and highly effective ministry taking place within churches across our state.”

Consequently, the focus of the team shifted from the development of a ministry approach to the gathering established practices and resources, which led to the materials located on the Convention website. The focus of the information and ‘how to’ resources highlight four areas of ministry—immigrant, migrant, international travelers, and human trafficking.

In action taken during the meeting, the Board authorized the FBFS to sell the Florida Baptist Retirement Center located in Vero Beach to a future buyer. Rick Wheeler, FBFS president said that during the pandemic, it became obvious the small, local nursing home could not fully support the changing needs in today’s market. Proceeds from the sale will create a fund to benefit retiring Florida Baptist pastors in need and additional ministries for Florida Baptist retirees. 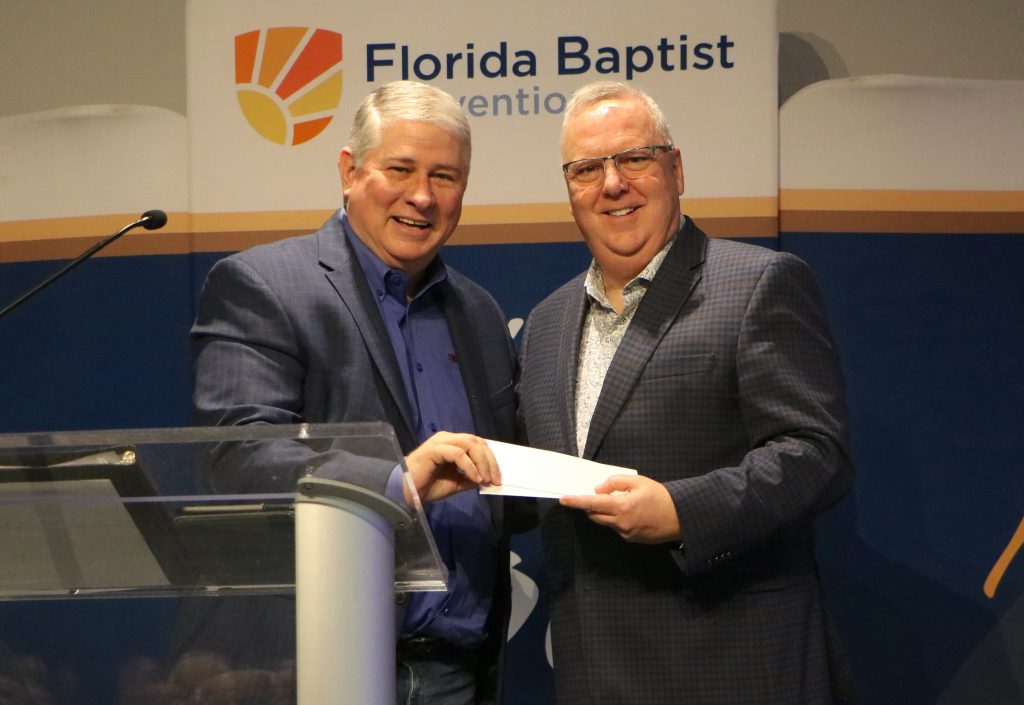 In another matter, Board members rejoiced when Wheeler presented to the Convention a check for $1,345,691 from the estate of dedicated Baptists, Richard and Marilyn Placzek, who at the time of their deaths were members of Fifth Avenue Baptist Church in St. Petersburg.

Wheeler also presented the Convention with a check for $406,407 to the Cooperative Program Endowment Fund. The endowment fund was established in 2000 to create an income stream to supplement CP giving. At the end of the year, the fund had a balance of approximately $4.4 million.

The Board approved a recommendation for the FBCH to sell 16.2 integral acres of land located in Jacksonville to the First Baptist Academy, which is currently leasing the land for its school campus.  In all, the school is purchasing a total of 38 acres of land from the children’s home. The FBCH plans to retain 18 acres of the property with the expectation of adding a 25,000 sq. ft. compassion center, two foster family homes and six homes to serve single mothers and their children.

The Board also learned 88 churches from six regions received church planting and revitalization funding during the first three months of 2021.

Approval was given for a policy governing the Convention’s release of reversionary interest in property which offered a mechanism to handle reversion clauses most often attached to church properties.  The Convention has not entered into a reversion agreement since 2015.

During the meeting Green provided the Board with statistics demonstrating how churches responded with new, creative ministries to reach and minister in their communities, both in 2020 and during the past five years. “When things were at their worse, our Florida Baptist churches were at their best,” he said.

Churches reported 28,636 mission engagements in 2020, mostly conducted in their communities. Many of these ministry outreaches were in response to hunger needs during COVID, as 708 churches partnered with the Convention to distribute $31 million in food, including 8,216,015 meals, resulting in 6,424 professions of faith.

Another highlight of ministry was Florida Baptist churches’ continued support of the Cooperative Program in 2020 and 2021. During the first three months of this year, churches exceeded the budget, sending 51 percent—or an additional $55,729 through the Southern Baptist Convention’s CP budget.

Green also told the Board that during the past five years, the Convention increased its total assets to $51 million from $38 million in 2014. During that same period, Florida Baptists gave $145,329,800 to the Cooperative Program. Having increased the SBC-CP percentage distribution to 51 percent in 2016, $77,839,234 was advanced to the SBC.

“God has been incredibly good to Florida Baptists based on the Biblical principle of generosity,” said Green. “When you give away God is going to give you more to give away, all to the glory of the Lord.”

The State Board of Missions will next meet Aug. 26-27 at the Baptist Building in Jacksonville.