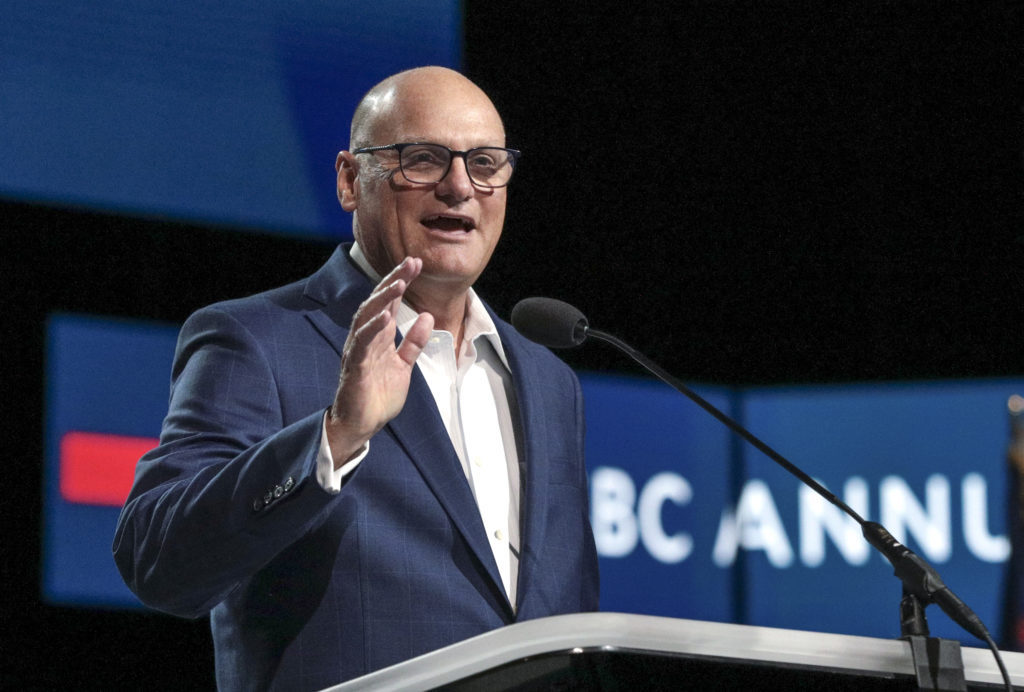 Pictured Above: Willy Rice, senior pastor of Calvary Church in Clearwater, Fla., delivered the convention sermon for the 2021 SBC Annual Meeting based on 1 Corinthians 3:3-17. Photo by Eric Brown

NASHVILLE (BP) – In delivering the Convention Sermon at the 2021 Southern Baptist Convention, Florida Baptist pastor Willy Rice implored Southern Baptists to go for gold, silver and precious jewels, not the wood, hay and straw that has its short-term advantages but little benefit in terms of longevity.

Rice, senior pastor of Calvary Church in Clearwater, spoke Wednesday, June 16 in Nashville, citing 1 Cor. 3:3-17. The passage, he explained, gives a clear picture of division in the early church that grew out of competing allegiances to leadership. Such misplaced devotion, he said, can be observed today.

While the Corinthian church also dealt with challenges over doctrinal confusion and moral compromise, Rice noted there was a greater internal threat. Four factions had emerged of those declaring their devotion to Paul, Apollos, Peter and the Lord Himself. Southern Baptists could take note of those divisions to heal the current rift in the Convention, he said.

One of those is being sure of your leader’s allegiance.

“There is no evidence of the individuals [in this passage] sowing division,” said Rice. “But clearly, there were those in the Corinthian fellowship using unhelpful labels and promoting division.”

In short, Rice explained, a kind of early church “celebrity culture” had appeared. In the letter to the Corinthian church, Paul quickly moved to condemn it.

“We have seen the product of a celebrity culture, where pastors and leaders become the star of the show, photobombing Jesus at every turn,” Rice admonished. “What does it say about us when we have more green rooms than prayer rooms?”

While attending the annual meeting is good, Rice encouraged messengers to remember the real point of their ministry.

“Hell does not quake when the SBC passes a resolution and Heaven does not rejoice when we raise our ballots in the air,” he said. “… the real work of Southern Baptists is out there, not in here.”

That “real work,” he said, shows itself in the student pastor setting out chairs for a Bible study. It appears in volunteers blowing up balloons for Vacation Bible School. It manifests in a couple arriving in a faraway land, ready to present the Gospel to an unreached people group.

“What happens in here (the annual meeting) only matters to the extent that it sustains and provides for what happens out there,” Rice said.

The Gospel – pure and unadulterated – is the gold, silver and precious stones upon which Christians are to build their testimony, Rice maintained. The eventual fire of judgement reveals our witness and ministry for what it really is.

“Whenever we substitute the message of truth for worldly ideologies or flawed philosophies, we trade precious gold and precious jewels for wood, hay and straw,” he said.

Rice pointed to the discussion over critical race theory, which he said “offers a flawed diagnosis, hopeless prognosis and writes a powerless prescription rooted in materialistic humanism and political power. … It cannot cure the deepest ills in the human heart.

“Every idea,” he continued, “every teaching must be tested against the message of Scripture, and we must always anchor ourselves to those truths or we will drift where we do not want to go.”

While Rice said topics like CRT and Marxism are real subjects that cannot be overlooked, he said neither can the fact that a lot of Christians on social media just act like jerks.

“If you seek to contend for the truth but don’t do so in the fullness the Holy Spirit, has it occurred to you that you’re doing more damage to the truth than your most virulent adversary?” he asked, adding that the fruit of the spirit needs to be modeled not only for unbelievers, but for brothers and sisters in Christ with whom we simply hold a disagreement.

At the end of the day, he said, a Gospel witness is tarnished.

“I do not want to compromise the truth, but neither do I want to be known as the church of angry old men with rocks in their hands,” Rice said.

Regarding the subject of justice, he focused on where the topic has its roots.

“Justice is not an idea born in the halls of Ivy League schools or the hearts of atheistic philosophers,” Rice preached. “It’s born in the heart of God, who is just. We wouldn’t even know what justice is if it weren’t from God. It comes from God and His word and Jesus told us to pursue it.”

“We must be for biblical justice. … We should value the voices of those who have suffered injustice, including many of our Black brothers and sisters,” Rice said.

“It is beyond the pale of comprehension that a Christian body against an all-too-familiar backdrop of a not-too-distant history would engage in sideshow debates that shut down, shut out and shut up our own brothers and sisters in the faith.”

That principle also applies to valuing women in ministry.

“We did not build one of the largest missionary forces in the history of Christendom by telling Lottie Moon to go home,” Rice said. “Most of our daughters, sisters and mothers only desire to obey the demand of the risen Christ and submit to every word of His authority. Yet, some grow disheartened when shepherds in the church become more agitated over peripheral debates than they are over leaders who have betrayed their sacred duty to care for the flock.”

In closing, Rice urged Southern Baptists to dwell on what’s at stake in their interactions and witness, saying, “Only an eternal perspective grants us both wisdom and courage to face the challenges of this present moment.

“We know eternity is coming, and with it both a day of reward and ruin. When the fire comes, we’ll see the gold, silver and precious stones for what they are.”

Rice further cautioned others against taking “a careless sledgehammer to the house of God just to make a name for yourself. Eternity is coming, and God is watching.”

Over recent days, he admitted, his heart had been broken for how many had compromised their witness.

It comes back to the basics of our testimony and faith, he added.