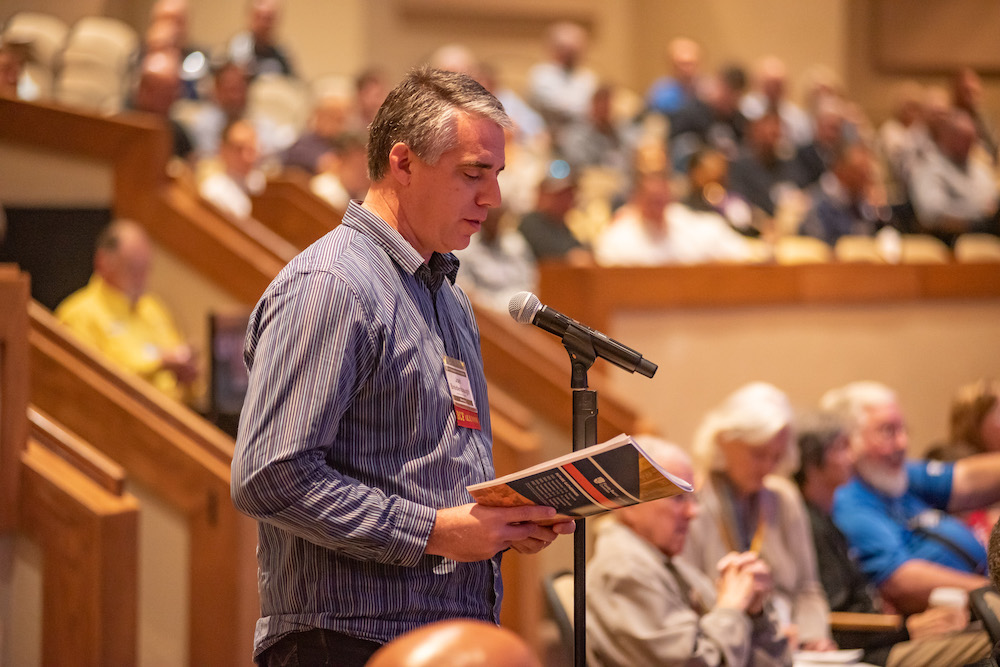 Pictured Above: Messenger Joel Breidenbaugh from Gospel Centered Church in Apopka brought the motion requesting that options be developed for the annual meeting to meet online in the event something prevents the annual meeting from occurring in person.

After a detailed evaluation of options available for an alternate meeting solution, if a catastrophic event or other widespread emergency prevents the annual meeting of the Florida Baptist State Convention from occurring in the future, the State Board of Missions will be recommending a series of amendments to messengers that would codify the process utilized with the cancellation of the 2020 annual meeting during the peak of the Covid-19 pandemic.

These recommendations come after messenger Joel Breidenbaugh from Gospel Centered Church in Apopka brought a motion during the miscellaneous business session at the 2021 annual meeting of the Florida Baptist State Convention held at the Lakes Church in Lakeland, requesting that options be developed for the annual meeting to meet online in the event something prevents the annual meeting from occurring in person.

“I move this convention appoint the State Board of Missions to devise options to meet online with secure voting measures in place at any future annual meeting should anything prevent this convention from occurring in-person. These plans will be presented with a recommendation to this convention for consideration at the November 2022 gathering of the Florida Baptist State Convention in Pensacola, Florida.”

Research by the board into available options began with reviewing distinctives of our Baptist heritage and evaluating the tools available through the Florida Baptist State Convention’s existing governing documents and adopted rules governing its meetings.

From the outset, the board recognized that emergency situations require some level of adaptation and highlighted the distinctives of Baptist polity in which “each believer is responsible for seeking direction and wisdom from the Holy Spirit and expressing his convictions within the decision-making structures of the local church.”[1] The board desired that any adaptations must require limitations in scope so as to not deviate the governance of the body from the historical practice of our convention being a deliberative body of believers.

Additionally, the Florida Baptist State Convention has adopted standing rules that identify “Roberts Rules of Order Newly Revised” as the rules governing the convention. The board’s research highlighted several key rules that directly impacted its deliberations regarding alternative/emergency solutions should the messengers be prevented from gathering in annual session. One such rule, Roberts Rules of Order 1:1, identified several key elements of the nature of a deliberative assembly including:

Guided by key distinctives of our Baptist heritage and core elements of Roberts Rules of Order, the board contemplated three scenarios.

The board discussed and accepted that emergency situations take on various characteristics. Some of these characteristics include limitations on technological solutions. The board felt that the underlying assumption of the motion was a future event in which messengers were prohibited from gathering in-person. In Florida, the most common such events are hurricanes and/or other severe weather systems. In these and other events of broad impact, the board could not rely on a process that required electricity and other infrastructure necessary for remote attendance to be broadly available. In fact, the board recognized that as the need for a remote meeting option increased (e.g., an emergency or other catastrophe impacts a broad swath of the state or nation), the likelihood decreased that electronic/internet-based solutions would be available when needed.

Therefore, the board was compelled to evaluate an option that was rudimentary in nature (written correspondence) and addressed the lack of technological solutions being available. As “Roberts Rules of Order Newly Revised” was evaluated, RONR 9:34 highlighted that “a group that attempts to conduct the deliberative process in writing (such as by postal mail, e-mail, ‘chatrooms,’ or fax) – which is not recommended – does not constitute a deliberative assembly. Any such effort may achieve a consultative character but is foreign to the deliberative process as understood under parliamentary law.”[3] Nonetheless, the board developed and considered a draft process for written correspondence.

Furthermore, despite the probability of lacking infrastructure, the board evaluated a process for remote/electronic meetings. From the outset, the board faced some fundamental challenges. RONR 9:31 recognized that “among some organizations, there is an increasing preference, especially in the case of a relatively small board or other assembly, to transact business at electronic meetings…” However, there is caution applied that a group not “lose its character as a deliberative assembly (see RONR 1:1) so long as the meetings provide, at minimum, conditions of opportunity for simultaneous aural communication among all participating members equivalent to those of meetings held in one room or area.”[4]

RONR 9:34 further stressed, “The opportunity for simultaneous aural communication is essential to the deliberative character of the meeting.”

The board recognized the inherent challenges of electronic meetings. The reality of opening an electronic meeting up to complete and true “simultaneous aural communication among all participating members” is a recognized recipe for electronic meeting disaster and once again would be a limitation on the convention’s ability to maintain the identity of a fully deliberative body. It was the opinion of the board that any consideration of an electronic meeting should again deal with a narrow scope of decisions by the messengers related to the continuity of convention operations. Although an electronic/online meeting would not be as restrictive as the written correspondence option and would allow for some limited levels of deliberation beyond that of just Yes/No, it nonetheless would narrow messenger action to items of business directed by recommendations from the State Board of Missions.

An overarching reality facing the board was the fact that, outside of an in-person deliberative assembly, some level of authority would be required in guiding the optional/emergency process. It recognized in these instances that the State Board of Missions, under authority already extended by the Florida Baptist State Convention’s governing documents to act ad interim of the convention, would have to serve in critical areas for any alternative process.

Essentially, with any alternative, messengers would be relying on an established governing body (the State Board of Missions) to make certain levels of decisions on its behalf, in advance of anything being presented to the messengers through an alternate meeting solution. Furthermore, these alternative solutions would drastically impact several distinctives of our Baptist polity and heritage of being a deliberative body. Given the State Board of Missions is already a diverse body of Florida Baptists with its membership coming from all parts of the state, the board is recommending that the convention continue to lean into its process of relying on the board to carry out its work ad interim and to further delineate the scope of work it would undertake should an annual meeting be prevented from occurring in the future due to a catastrophic event or other widespread emergency.