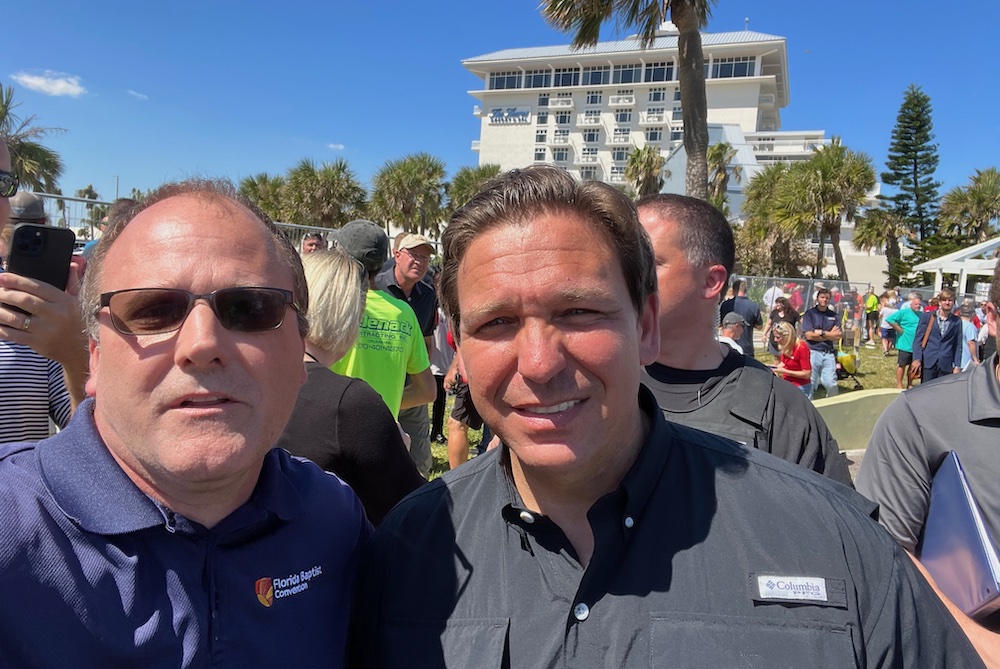 Pictured Above: Steve Loy with the East Central Baptist Network with Gov. DeSantis. 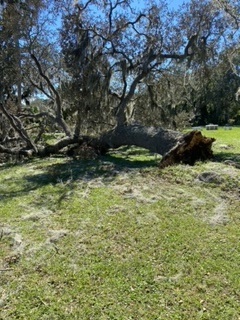 When Craig Culbreth checked in with pastors of Florida Baptist churches in the Daytona Beach area after Tropical Storm Ian passed through, he began to hear a common thread of widespread flooding that caused damage to homes and churches.

He knew that homeowners and church leaders would benefit from the work being done in the state by Florida Baptist Disaster Relief teams and DR teams from other Baptist state conventions. With the hardest hit communities in southwest Florida attracting so much focus in recovery efforts, Culbreth wanted to make sure the Daytona area also got help. 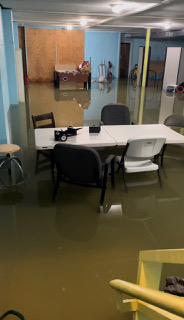 “It was more of a water thing here instead of wind,” said Culbreth, East region catalyst for the Florida Baptist Convention, about the flooding caused by rain from Ian. “I just worked through our system with Florida Baptists and let our DR people know we needed some cleanup and recovery teams here.”

Ryan Detheridge arrived the evening of Friday, Oct. 7, in Daytona with the Oklahoma Baptist Disaster Relief Team. His team of 61 volunteers, along with 10 response units full of equipment and supplies, established its command center at First Baptist Church of Daytona Beach. In less than 48 hours, the group had already set up a local phone number, received more than 50 calls from residents requesting assistance and sent volunteers out to make assessments. From those initial visits, the team prioritized the requests and began assisting with cleanup and recovery efforts on Monday, Oct. 10.

“We have not yet seen all the damage, but we’ve heard about houses having four feet of water in them,” he said. “There is definitely a need here.”

This team’s focus is cleanup and recovery, and volunteers will be doing lots of tarping of homes, flood recovery inside the homes and cutting trees and debris removal outside the homes. Work inside the homes can include removal of carpet, removing sheetrock and insulation and the spraying of disinfectant to prevent the spread of mold.

“We will probably be here about six weeks, longer if we’re needed,” he said, noting that his team is one of three in Oklahoma that will rotate weekly. The volunteer teams travel on Saturday and Sunday and work Monday through Friday.

Cleaning out ‘50 years of church history’

First Baptist Church of South Daytona, as well as its members and those who live near the church, will benefit from the cleanup and recovery efforts. Pastor Charles Mims said three of his church members lost everything due to flooding, and about 70% of members had some sort of damage, including the loss of vehicles. 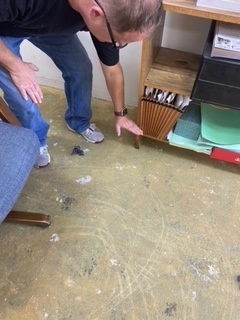 The church’s education building, which includes the main office, kitchen and fellowship hall, was damaged by a foot of water, which has ruined carpet, furniture, cabinets, bookcases and more. The newer sanctuary is higher and was not flooded.

“There are charter members who said they have never seen it this bad here,” Mims said, noting the church was built about 55 years ago. “The water has never come up this far.”

Like so many people in the area, Mims, church members and other volunteers spent a lot of time last week pulling up all the damaged carpet and taking it to the street, along with all the other damaged items. The process of watching historical church items being thrown away can get overwhelming, he said.

“As we clean out 50 years of church history, it begins to work on you mentally,” he said. “Everyone on this street lost something. You see people’s material lives out on the street, their memories on the street, boxes of photos and pictures on the wall that were damaged. It’s so heartbreaking.” 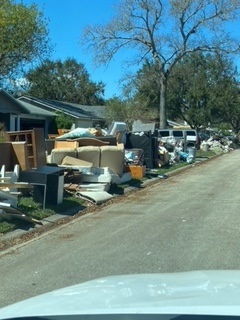 Despite such devastation, Mims said he and church members are thankful it was not worse. “God has been good through this. None of our members lost their lives so we see that as a victory. All of these things can be replaced.”

From ‘little storms’ to ‘big storms’

Charlie West, pastor of Beach House Church, echoes that same sentiment when he speaks of the damage to his church, which includes the total loss of the church’s 2,500-square-foot basement and all its contents, and all the damage associated with two feet of water inside the main level.

“For me personally, this is my third or fourth hurricane at this church,” he said. “Every time we’ve had some damage. We had to replace a roof last time. But God has been with me every time, and I just know He’s going to take care of us. He’s been so faithful to call me here, to sustain me and to provide for me. He’s worked my endurance from the little storms to be able to handle the big storms.”