Pictures in this article are courtesy of WinShape Camps.

QUINCY–When Connie McClendon first learned about Chick-fil-A’s WinShape Camps, she knew she wanted to bring the dynamic children’s day camp to her church and to her community.

Then she visited a camp in nearby Tallahassee with some youth leaders from her church and what they saw and experienced sealed the deal. She said it’s like “VBS on steroids.”

Maybe it’s the 24 college students who serve as the high-energy camp counselors and teach the campers about the love of Christ. Maybe it’s all the fun outdoor games and activities, indoor electives like Wacky Science and Fast Food, or the popular team competitions.

“It was amazing,” said McClendon. “I want this for Quincy!” 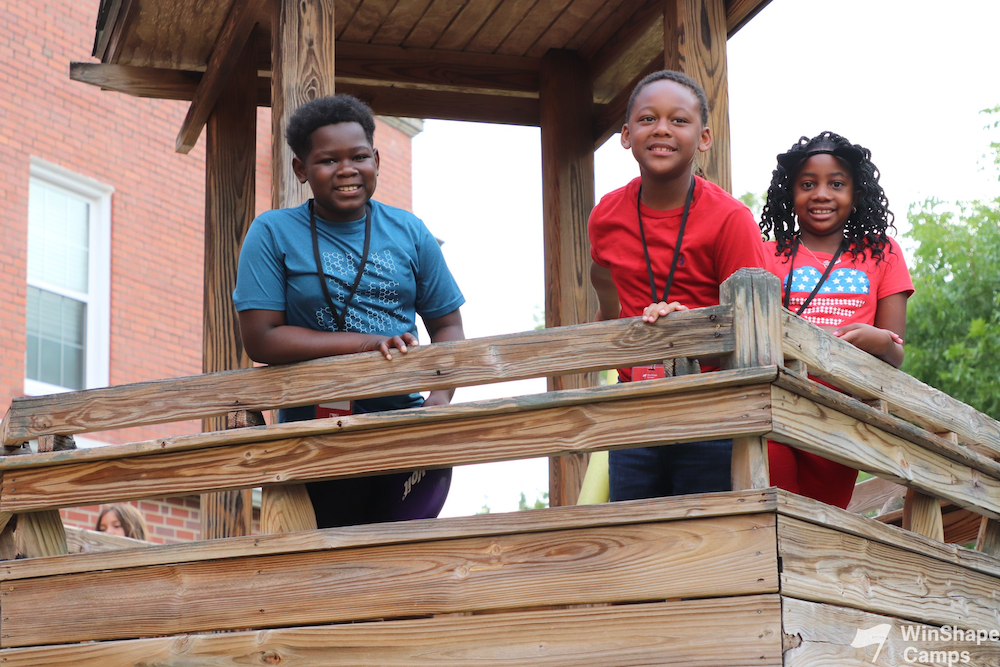 At the time she was serving as children’s director at First Baptist Church of Quincy and was searching for a summer camp experience for children who could not afford to go to camp or whose parents were unsure about overnight camp.

There was just one problem. There’s not a single Chick-fil-A restaurant in Quincy or in all of Gadsden County. And you can’t host a camp without a restaurant sponsor. McClendon thought all hope was lost.

That’s when she met Steve Elyea, the owner/operator of two Chick-fil-A restaurants in Tallahassee.

“After I explained to him our unique situation with the poverty and the hopelessness in some areas of our city and county, he was ready to jump on board,” she said. “We could not have had camp if he had not agreed to come to Quincy every day.”

That was five years ago, and the church has been hosting the popular camp every summer since. Last year’s camp was cancelled due to Covid, as were many camps this year. The WinShape camp in Quincy was the only one between Jacksonville and Pensacola in 2021. 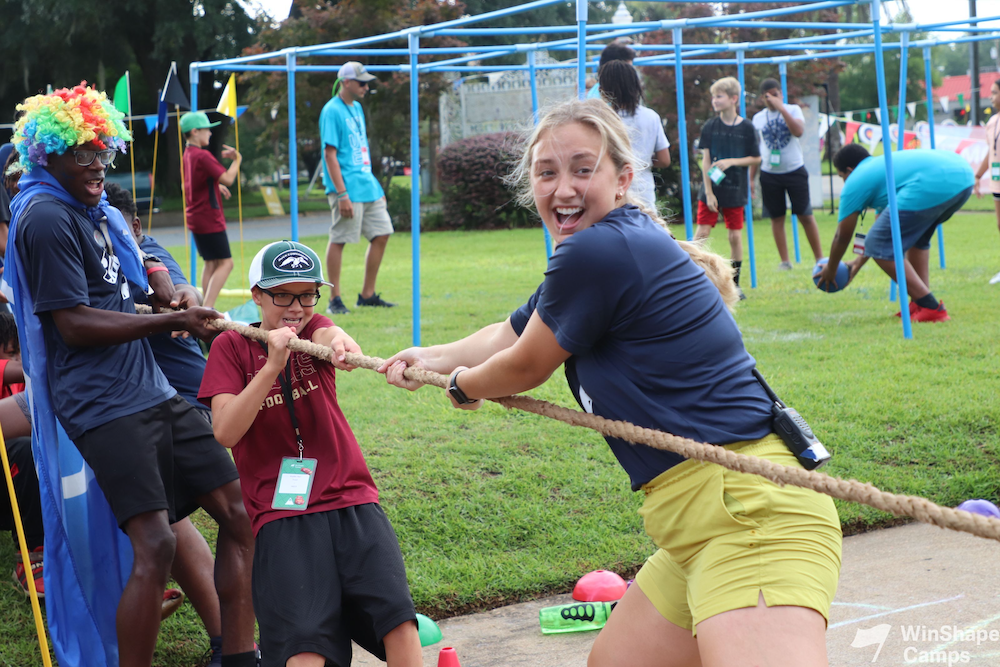 The camp started this year with more than 200 registered campers but dropped to 182 due to the uptick in Covid cases. It was a great experience for all involved, McClendon said. They had 13 children profess faith in Christ, with about 30 more who want to talk further about the gospel.

“We had children crying on Friday because camp was over and they didn’t want to leave,” she said. “We also heard stuff like – ‘Guess what Grandma? I got saved. I’ve got eternal life. I got a new Bible and I’m going to read every bit of it.’ Just amazing stories of children being able to realize that God loves them, and they have a purpose, and He has a plan for them.”

The camp draws children from all areas of the community, she said, helping to break down racial and socioeconomic barriers. “There is a divide in Gadsden County and WinShape crosses that divide. We have children from all walks of life, and they make friendships that last.”

It takes a big team to put on the camp. In addition to the 24 staff, there are about 40 more volunteers, including teenagers, who serve in a variety of capacities. This camp ministry not only impacts the kids, but everyone involved.

“Volunteers minister to the staff, staff ministers to the volunteers, everyone ministers to the children and the community is better because of it,” McClendon said. “I can’t say enough good things about WinShape and how God works in it.”

Elyea of Chick-Fil-A agrees. After being on a waiting list for several years to get a camp in Tallahassee, he soon found himself the sponsor of two camps. He said the camp is part of the charitable arm of Chick-fil-A, the “heartbeat and passion” of its founder S. Truett Cathy.

“We’re all in,” he said. “My marketing director likes to say that WinShape Camp is her favorite week of the year. I couldn’t agree more.”

The restaurant provides almost 200 lunches for the Quincy camp Monday through Thursday and about 500 for the family celebration on Friday.

“Connie and the First Baptist of Quincy are excellent partners,” Elyea said. “She’s had the same leadership team all these years. Most of the volunteers we know on a first name basis because we’ve worked with them for five years now.” 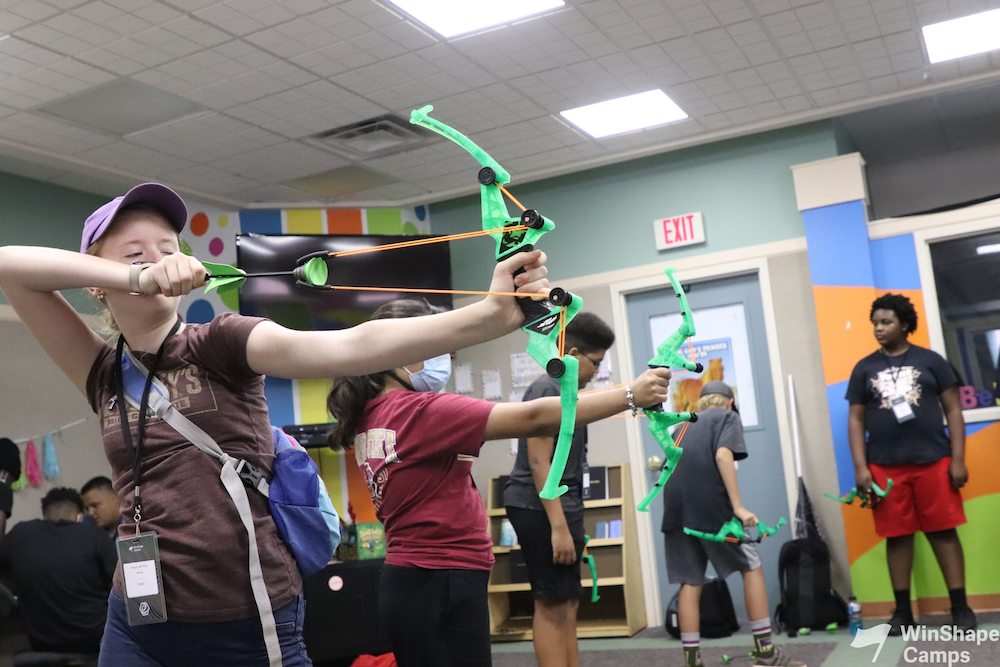 Being a new camp to the area, it was challenging the first two years to reach the 150 campers required by contract. To help pay for scholarships for students who could not afford camp, the church received financial assistance from the Florida Baptist Convention.

“We flew on faith that first year. When the bill came in, we had what we needed to pay for it,” she said. “I know the Florida Baptist Convention was a huge part of that – thank goodness – because they gave us a big donation and have helped us every year.”

McClendon retired three years ago from her role as children’s director, but she still returns each year to do this camp.

“It’s because we love the kids so much,” she said. “I want the children of Gadsden County to hear the gospel. I want them to know they have a purpose. I want them to know they’re loved by a God who created them. And He created them on purpose, and they were not a mistake like some of them, I think, are told they are.  The team and I want to bring it for the children of Gadsden County who would not get it any other way.”