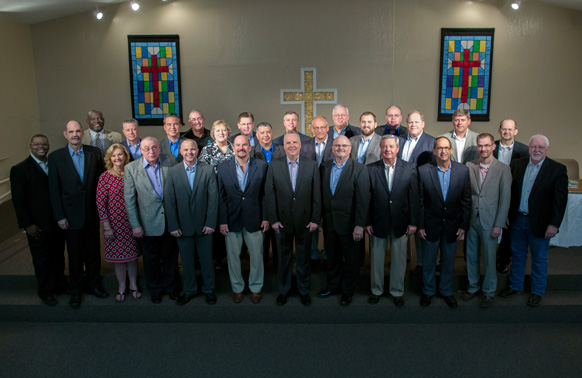 A major reorganization of the Florida Baptist Convention staff that reduces the number of employees statewide by 47 percent—to 61 employees from the 115 currently employed—was approved by the State Board of Missions, Sept. 18 at Lake Yale Baptist Conference Center.

The reorganization and downsizing was the fulfillment of a promise made by Executive Director-Treasurer Tommy Green on May 29 at the time of his election to the post. He stressed the need to have a responsive, lean missions organization that is decentralized, regionalized and personalized.

The downsizing will make it possible to send 51 percent of the proposed 2016 Cooperative Program Budget to the Southern Baptist Convention—a nearly 10 percent increase– and ultimately “put more missionary families on the field,” he said.

The new structure is comprised of five major program groups—Executive Director-Treasurer Office, Next Generation, Regional Catalysts, Mission and Ministries, and Support Services—reflecting an effort to streamline and decentralize the convention staff to more effectively provide ministry support to local churches and associations.

The reorganization includes 28 Board-elected (ministry) staff; and 33 administrative approved persons who serve as ministry assistants and support personnel. The 33-member support team includes 13 employees at Lake Yale Conference Center in Leesburg and a caretaker for the Blue Springs Conference Center in Marianna.

The remaining staff was reassigned to newly defined roles.

The Board approved an executive management group to be called the Leadership Team—formerly known as the administrative staff—to provide counsel and decision making advice and perspective to the executive director.

The Board eliminated 36 Board-elected staff positions, some of which were vacant, effectively immediately.

Green assured the Board that the displaced persons were treated fairly and generously with their compensation package.