Despite the heavy rain that day, about 185 people representing three different churches gathered to witness 25 take part in believer’s baptism in the Suwannee River on a recent Sunday afternoon.

As the final few baptism candidates arrived, the rain suddenly came to a halt.

“That changed the whole atmosphere in the crowd when that happened,” said Dwayne Kight, pastor of Faith Baptist Church. “When the rain quit, it choked up a bunch of people.”

Wasting no time, the three pastors from those churches and their baptism candidates made their way into the river and the baptisms began.

“It was like Jesus in the River Jordan,” said Jon Edmisten, pastor of Hope Church Chiefland. “It was really cool.” 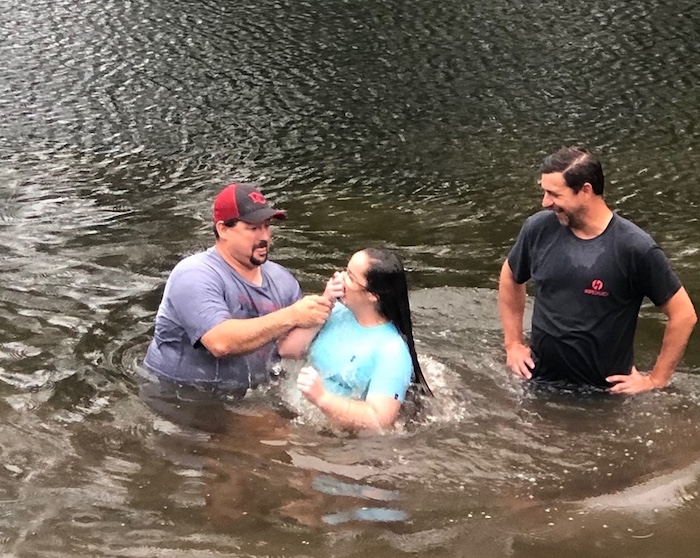 The pastors took turns, each baptizing one of their members at a time. Kight reminded everyone about the purpose of baptism. “Baptism does not save you. Baptism is just a testimony that you’ve been saved. Baptism is an outward expression of an inward occurrence.”

The crowd of people gathered along the banks of the river to witness this unique form of baptism. The scene was so touching that one observer asked if he could also be baptized.

“He actually gave his life to Christ on the end of the dock and then stepped on in the river and got baptized,” Kight said. “It’s pretty wonderful.”

He was the 25th person and the last to be baptized that day and almost immediately afterwards, the heavy rains returned. To those in attendance it seemed God had allowed the rain to break just long enough for these baptisms to occur. Everyone then gathered beneath the pavilions at the park and enjoyed lunch together.

With river baptisms being so dependent on the weather, some may ask why churches choose to do them.

“I don’t know how to explain it. I guess you could say it’s more spiritual,” Kight said. “When you read about Jesus getting baptized, he didn’t get baptized in the baptistry. There is more of a connection with the river baptism.”

Indeed, the river baptisms are a tradition for many Southern churches, recalling a simpler time before modern churches began including indoor baptistries in their buildings.

Kight said several of his members had requested a river baptism over one in the baptistry. As he started making plans, he received a call from Edmisten of Hope Church Chiefland, who wanted to use their church to do their first baptisms. When Ricky Downing, the pastor of First Baptist Church of Old Town, called to ask Kight about a river baptism, the men decided to do a group baptism.

“The churches in this area are really on fire for the Lord,” said Kight, who has baptized 31 people so far this year, up from nine in 2018. “To get three Baptist churches from our area to come together and do something like this is pretty amazing. That baptism gives a good testimony to what God is doing in our three churches, but other things are about to start happening in the community between the three churches as a result of this.”

These plans include a community night, where the three churches come together for one service, as well as more activities for youth.