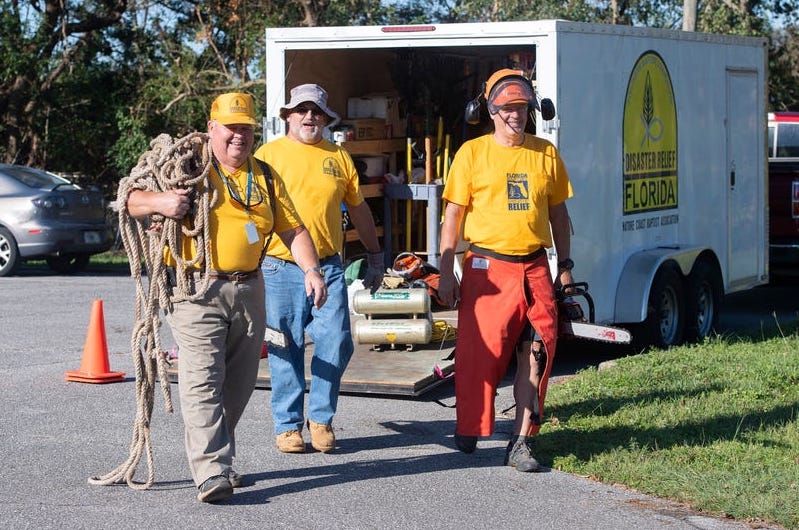 PENSACOLA, Fla. (PNJ) – Behind a seven-foot wall of tangled tree branches on the curb that stretches the length of her property, Betty Tuberville watched Thursday morning as disaster relief volunteers from the Southern Baptist Convention took down the trunk of a tree that had punctured her neighbor’s roof.

The volunteers had been working for a couple of days on clearing neighboring properties of debris. After Hurricane Sally, a massive tree blocked entry into Tuberville’s yard, so a pathway to the house needed to be cut by volunteers.

Tuberville is a disaster relief volunteer herself, but she hasn’t been able to help yet because she’s had too much work to do on her own property.

“I’m not used to being on the other end. It’s hard,” Tuberville said. “It’s humbling and a lot of friends told me ‘You’re robbing people of their blessing by not letting them help you.’”

The group was on day 15 of their response to Hurricane Sally in the Pensacola area, serving almost 47,000 meals and now working through its almost 1,100 families in need of donated tree work, roof tarping or flood response. Roughly 150 to 200 volunteers from across the country were working Thursday, and volunteers will likely be in town through mid-October.

“The mystery of it, I guess, when you do have a call out, is who’s coming and how quick will they get there,” said Sonny Davis, cleanup recovery coordinator for the Southern Baptist Convention’s Florida task force. “There’s a lot of moving parts.”

Previously, many of the volunteers were either serving in Louisiana to help with Hurricane Laura recovery or they were rerouted to the Pensacola area before getting to Louisiana.

Leaders have to coordinate bringing in equipment, travel days for volunteers and even where they will sleep, eat and shower while they’re here, which ended up being Hillcrest Church on Nine Mile Road.

“It’s not just Florida. All these other states have their own problems. Volunteers are being stretched,” Davis said. “(Laura) is not the first storm that we’ve had to leave to come back to Florida.”

Following Hurricane Sally, the group received so many phone calls for help that they had to begin turning people away for fear they wouldn’t have the resources to complete the work.

“Over promise is a big concern,” Davis said. “We got to a point where we were afraid we wouldn’t have the volunteers available.”

Volunteers are expected to put in thousands of hours of work in the area, said Delton Beall, state director of Florida Disaster Relief. Those are tracked, put into spreadsheets and given to the local governments, which helps with aid from the Federal Emergency Management Agency.

Once a call is taken, a team of two assessors goes out to inspect the scope of damage at a home. After that, volunteers in the command center try to match up jobs with the abilities of the crews who will be doing the work.

Most of the organization’s volunteers are retirement age and travel on their own dime. Other volunteers take vacation time from work, with many serving for a full week before returning home.

Richard Creech, a retiree from Inverness in Citrus County, has been a disaster relief volunteer since 1996. He is the leader of the nine-member crew who helped to pull the tree from the home of Tuberville’s neighbor Thursday and tarp the roof.

“We try to be as cautious as we can and as respectful of the homeowners because we only do what they ask us to do,” Creech said. “We’re very cautious in terms of not doing any more damage than what’s already been. We have to be very careful.”

The team has done one flood response call that involved tearing out furniture like cabinets and then spraying an anti-mold solution all over the house. The rest of the calls have been tree work, often removing trees that are blocking access to areas like garages, and now they’re doing more tarping of roofs before leaving Saturday.

Blaine Sheldon, another member of the team and a retiree, is a skilled chainsaw worker. He picked up the skill after cutting down wood to heat his original home in the Upper Peninsula of Michigan before moving to Inverness.

Sheldon has been doing disaster relief for two years and said his team talks with every homeowner they serve.

“We pray with them and share the Gospel with them,” Sheldon said. “Every one of them are thankful. They’re all very thankful. … You may run into somebody that doesn’t want to hear about the Scriptures, but you never heard anyone mad at you for working to help them.”

This story originally appeared in the Pensacola News Journal. Used with permission. May not be republished.