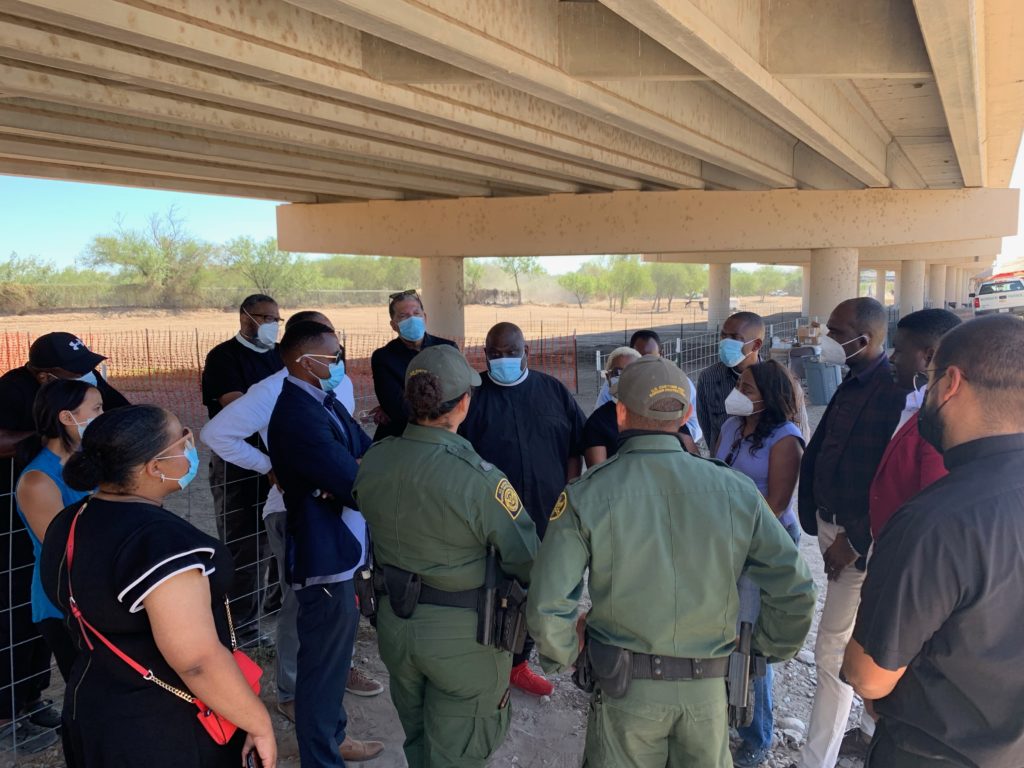 Pictured Above: Bruno Molina, language & interfaith evangelism associate for the Southern Baptists of Texas Convention (seventh from left) helped Haitian American Southern Baptist pastors and others as they met with border patrol agents in response to the Haitian migrant crisis at the U.S. border in Del Rio, Texas.

Keny Félix, senior pastor of Bethel Evangelical Baptist Church in Miami Gardens, hosted a community rally Sunday to mobilize local congregations to help with housing and other needs and to call for an end to Haitian deportations. Félix was among members of the Florida Haitian Baptist Fellowship who met with border patrol agents and Southern Baptists in Del Rio last week.

“The images that had been coming across our television screens and our telephones were quite disturbing,” Félix said. “And to see the plight of our brothers and sisters, we felt compelled to go to visit Del Rio and … meet with our brothers and sisters there. Part of the trip was also to determine what needs are essential and how the church can definitely respond to the crisis, in addition to just advocating for the stop of deportations.

“We can do better as a nation under God,” Félix said.

John Voltaire, who serves about 350 congregations as a Florida Baptist Convention (FBC) Haitian church catalyst, is helping spearhead the effort. Bruno Molina, language & interfaith evangelism associate for the Southern Baptists of Texas Convention, and members of First Baptist Church of Del Rio provided logistical support to the pastors during their trip to Del Rio Thursday (Sept. 23), when pastors distributed Bible tracts in Creole and French and donated other resources.

Images of border patrol mounted on horseback and grabbing migrants drew outrage from some, with President Joe Biden declaring that mounted patrol would no longer be used in the effort.

Voltaire said migrants being processed by Homeland Security are apparently being sent to hubs in Houston and San Antonio.

“The challenge is now, once they have been released from these hubs, they need people to receive them,” Voltaire said. “This is where housing becomes an issue, other than mental health counseling for them, other needs that they will have and people to help them to go back to their appointments with immigration, but also they need housing. And I think housing will be one of the biggest challenges.”

Haitian American churches and families offering to house migrants are already at capacity or overwhelmed, Voltaire said. He is encouraging churches with mission homes and other facilities to open their doors and to let the Biden administration know the temporary housing is available. The availability of housing can determine where migrants are sent.

“Apparently if credible organizations with homes were to reach out to the administration,” Voltaire said, “that would probably facilitate housing some of these people … to find their destination.”

Voltaire serves the area with the largest number of Haitians in the U.S., according to the U.S. Census Bureau that counts about 300,000 people of Haitian ancestry in Miami-Dade, Broward and Palm Beach counties.

Félix described the migrant situation as a crisis, with many of those being returned to their country of origin, Haiti, not having lived there for as long as 15 years. Many have lived in South America, he said.

Others who traveled to Del Rio included Samuel Louis-Jean, pastor of Calvary Baptist Church in Jacksonville; Alvin Herring, executive director of Faith in Action; and Patrick Chery, Miami-Dade organizer for Faith in Florida.

“The aim is to collaborate and help these families while advocating on their behalf for a change in U.S. policy,” Félix said. “The deportation has to stop. The resignation of Daniel Foote, the U.S. Special Envoy for Haiti, citing the administration’s ‘inhumane’ treatment of these migrants gives further weight to our call to action.”

In addition to sending international missionaries, Southern Baptists must also show hospitality when those in need come to our front door, Félix said.

“As a people of faith, we need to be welcoming, we need to be engaged,” he said. “When the people come to our doors, how do we respond? We can’t respond with horses. … No, we have to understand these are a group of people in crisis, and whether they were of Latino descent, whether they were of Asian descent, it’s people and you have to respect the inherent dignity of the individual before God.

“The church needs to stand and do what the church is called to do, which is to be the hands and feet of Christ, particularly to those who are in desperate need at this time.”