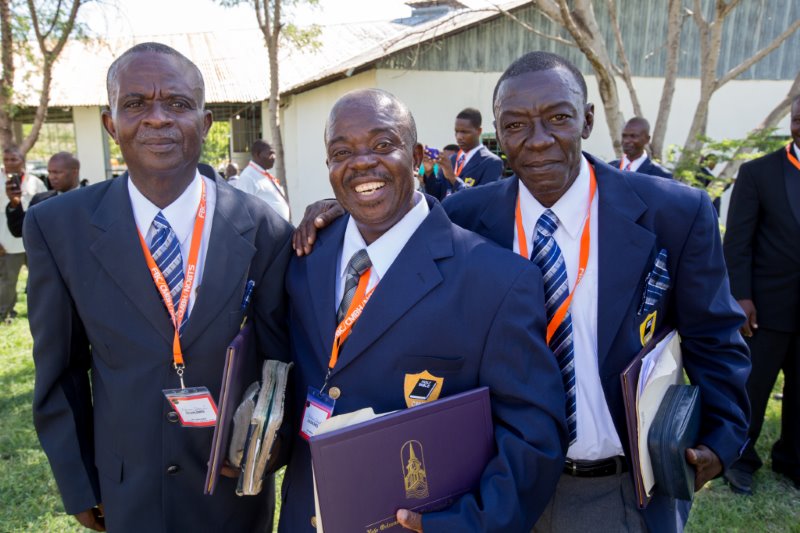 They entered through the door with poise and dignity, carrying well-worn Bibles, wearing matching blazers and ties, marching to the arrangement of the song “Pomp and Circumstance.”

The academic road they had traveled had been long—an arduous two years of theological training culminated that day in a graduation ceremony to receive their diplomas.

Many of the 186 graduates receiving their diplomas at the Confraternite Missionaire Baptist de’Haiti (CMBH) Graduation held Sept. 10 in Titanyan, Haiti, had walked for hours to participate in theological classes. Others had ridden public transportation along a dangerous maze of rutted paved and dirt roads.

During the two years of classes, Reginal Moise from Cayes rode a bus all night to the site of the training, sleeping in the vehicle along the way. Yet it was all worth it, he said. “I am excited to get my diploma.”

“Today’s a great day for us as students,” said Junior Charles from Bethanie Church in Delmar in his stilted English. “We have trained for two years by New Orleans Seminary. And now we can serve God and be able to reach other people for Him. By being trained we will be able to do that in a better way.”

The theological education program attended by the Haitian pastors is provided by the Florida Baptist Convention in partnership with the New Orleans Baptist Theological Seminary.

Florida Baptists have been partnering with CMBH churches in Haiti for the past two decades as the primary support of the organization. Together, Florida Baptists and the Haitian pastors have planted new churches until the original 36 congregations have grown to 1,654 across the nation.

The work is supported through the Convention’s Maguire State Mission Offering.

Prior to the commencement, the 20-year relationship was marked in a separate worship celebration with pastors and a delegation of Florida Baptists leaders.

“For us this is a great day,” said Pastor DeLouis Labranche, CMBH’s director of ministry, his excitement shining in his eyes and brimming in his voice. “It is the 20th anniversary of the CMBH, formed in 1995, and then we will graduate 186 students from NOBTS.”

For Labranche, the day’s activities were a “testimony” to the rest of the country, he said, that the Gospel is more powerful than the satanic voodoo religion that holds the hearts of the majority of the 9.9 million Haitians.

“The spiritual warfare in Haiti is very real,” added Tommy Green, executive director-treasurer of the Florida Baptist Convention, who traveled to Haiti for the anniversary celebration and graduation. “Indeed there is voodoo and there is spiritual darkness found around the country in Haiti.”

“As these pastors take their stands for Christ in their community, they are battling against a very present force,” he added.

Haitian pastors have no other opportunities “to find quality theological education,” Green explained. “So through the regimen of classes they have acquired elements of pastoral ministry to better equip them, to better equip their churches and other pastors and become more effective in ministering to their communities and cities.”

Green, who spoke during the anniversary celebration and graduation, was accompanied by a delegation of Florida Baptists, including James Peoples, president of the Florida Baptist State Convention and pastor of Trinity Baptist Church in Keystone Heights, and Michael Tatem, president of the State Board of Missions and pastor of Parkview Baptist Church in Lake City.

“Haiti is too close for us to ignore,” said Peoples. “It is just 700 miles from the shores of Florida and God has opened the door for us to come and make a difference bringing the light of Jesus Christ in this dark place.”

“I want to say thank you to the Christians in Florida,” said Pastor Elius Michel of Port-au-Prince, adding the CMBH’s often repeated watchword. “Haiti for Christ. And Christ for Haiti.”