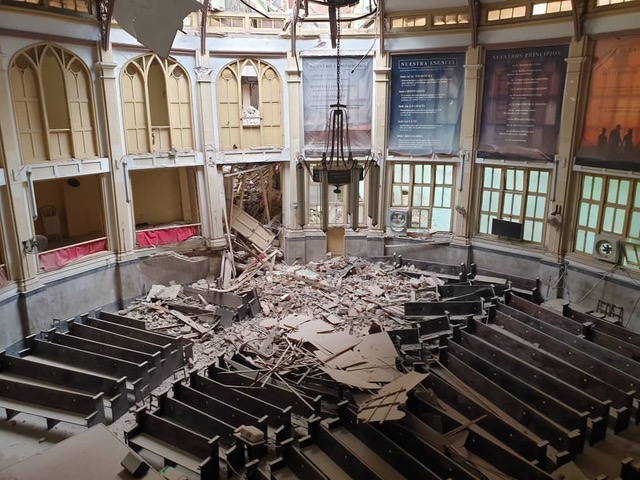 Gospel continues to be proclaimed

HAVANA– The church’s 19th century dome has been ripped open into the sky. Windows are shattered; floors have collapsed. Pews, which have held generations of devout Christian families in Western Cuba, are now reduced to splinters in a pile of post-explosion rubble. 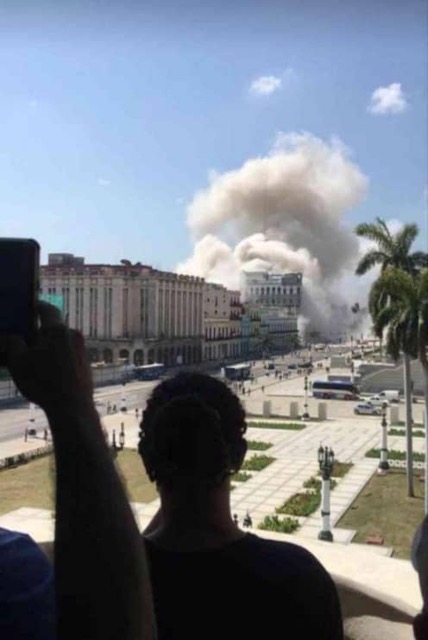 A May 6 apparent-gas explosion that devastated the historic Saratoga Hotel in Old Havana, Cuba, killing at least 46 people and injuring more than 90, also rained destruction on nearby Calvary Baptist Church, which is “at the heart of Western Cuba Baptists’ work.”

“When your cornerstone moves, that moves you. Our brothers and sisters in Western Cuba have been rocked to the core.”

Annie Armstrong, Southern Baptists’ namesake for its annual North American missions offering, was the key fundraiser for the purchase of the building.

It remains uncertain if the building can be salvaged, although Western Cuba Baptists are hopeful.

“We have hope regarding the building. We are confident the building will be restored to its original condition or better,” said David Gonzalez, vice president of the Baptist Convention of Western Cuba.

Still, leaders are grappling with “how to organize our daily operations at the Convention, which depended a lot on the building,” he said. Although Gonzalez has the technological ability to work from his home, many Western Cuba Baptists do not have those resources. 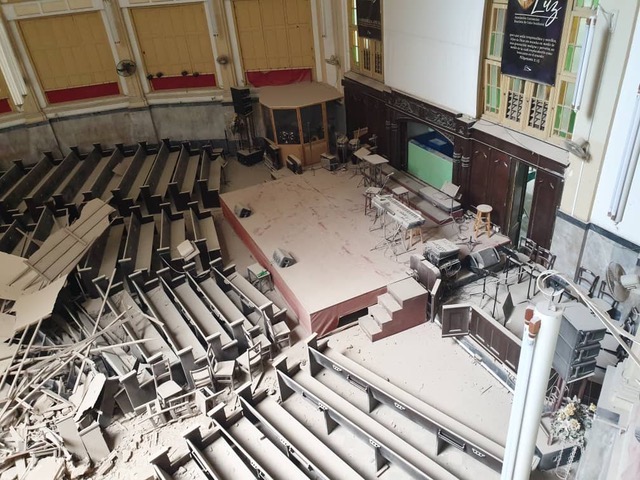 “We have to make proper adjustments to our functional ability so that … we can still keep doing what we are supposed to be doing” in sharing the gospel and caring for people, he said.

“Pray for wisdom and spiritual discernment to the situation we are facing,” he said. “We have a lot of questions but not a lot of answers.

“Pray that we will remain focused on reaching out with the gospel.”

Beyond the building’s devastation, however, none of the 15 adults and three children who were in the historic church at the time were injured or killed.

“There were incredible God-provision stories” regarding those who were in the church building as the explosion ripped through the walls and shook the foundation of Western Cuba Baptists’ work, said Myles Dowdy, Florida Baptists’ missions and ministry lead catalyst.

One man left three children in the church’s kitchen as he ran a quick errand in the building.

The explosion then roared through the quiet and everyday routines of the moment. Rushing back amid falling debris and smoke, the man saw a woman kneeling over the children with her arms outstretched, protecting them from harm. 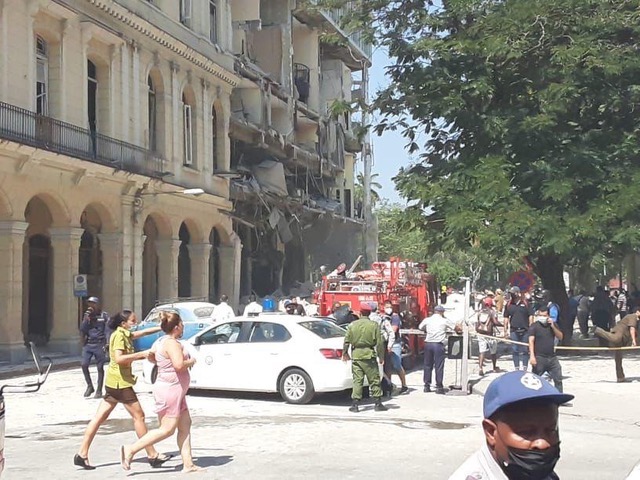 Later, on the streets strewn with debris and bodies in the explosion’s aftermath, he saw a woman, the one he thought had sacrificed her own safety for the children. With a sense of peace amid the chaos, he approached her to offer his gratitude, only to learn that she had been nowhere near the blast.

He is now certain that an angel of God protected the children, Dowdy said.

In a building on the other side of the hotel, 27 families have been displaced. In the church itself, two parsonages were lost. One was the home of Dariel Llanes Quintana, recently called as pastor of Calvary Baptist Church. The other was the home of the pastor who serves as church administrator. The blast devastated not only the church where these families serve but also their homes.

Since Christian revival began to sweep the island nation in 1990, Western Cuba Baptists have been zealous in sharing the gospel.

“The revival is still going today,” Urbanek said, noting that the Western Cuba Baptist Convention reported 31,865 professions of faith in 2021.

Although the explosion has made Western Cuba Baptists “really sad,” Urbanek said, “it will not impact their passion or zeal” for advancing the gospel.

Jose Betancourt, who directs evangelism efforts for the Baptist Convention of Western Cuba as well as for Calvary Baptist Church, was in his office at the church as the blast unleashed its deadly fury.

After he and the others in the church made their way to safety, Betancourt and another pastor joined local officials in recovering bodies of the dead and helping those injured by the blast. The two pastors removed seven bodies from the ruins and helped the many who were injured.

Although saddened and traumatized, Betancourt is unrelenting in his gospel commitment. Just a few days later, he and a team from Calvary Baptist Church and another local church were walking the streets of Old Havana, sharing the gospel with anyone who would listen.

Gonzalez added, “We are exploring new ways of reaching out and touching people’s lives in a wider and broader way than we ever have before.”

The explosion, he said, has provided opportunities for Western Cuba Baptists to minister to their neighbors who were impacted by the blast. In recent days, believers are ministering to those in need, offering food, water, houseware items, clothing and medications.

Dowdy prays that the zeal will continue as Western Cuba Baptists move forward.

“Pray that God will continue to use this event to allow the members of Calvary to give a Christian witness to their community,” he said.

Within days of the explosion, Urbanek and six others from First Baptist Church in Weston were on the ground in Cuba to assess damages and needs, deliver supplies, and pray with and encourage Baptist leaders there.

Each of the seven carried two suitcases, weighing 50 pounds each, filled with protective gear, such as hardhats and steel-toed shoes, for those working through the blast’s devastation, along with duct tape, tarps, rope, tools and other necessities. Each also had a carry-on bag filled with medicine and medical supplies. These provisions were added to the clothes, food and water being collected in the island nation to help those impacted by the blast.

Florida Baptists, who have partnered with the Western Cuba Baptist Convention since 1997, will continue to be on the frontlines of responding to the explosion’s aftermath.

In 2014, Gonzalez described Florida Baptists’ partnership with Western Cuba as “the most serious and important relationship that our Convention has with foreign entities.”

In the coming days, that partnership will be more vital than ever as Western Cuba Baptists begin the arduous task of recovering and rebuilding.

The Cuban government, Gonzalez said, has committed to provide resources to help reclaim and rebuild the devastated building and also made provisions for the congregation to hold Sunday services in a local sports arena, bringing all church members together into one service instead of the two services usually held at the church building. Beyond allowing the church to hold its initial post-explosion Sunday service in a sports arena, the government also is looking to secure temporary space for the church to meet on an ongoing basis. He is grateful for the “sensitivity” and response of the government to the church’s plight.

Western Cuba Baptists will rely also on their Christian brothers and sisters in America to come alongside them with prayer and resources.

“Pray that resources to maintain and rebuild the church will be given,” Dowdy said. 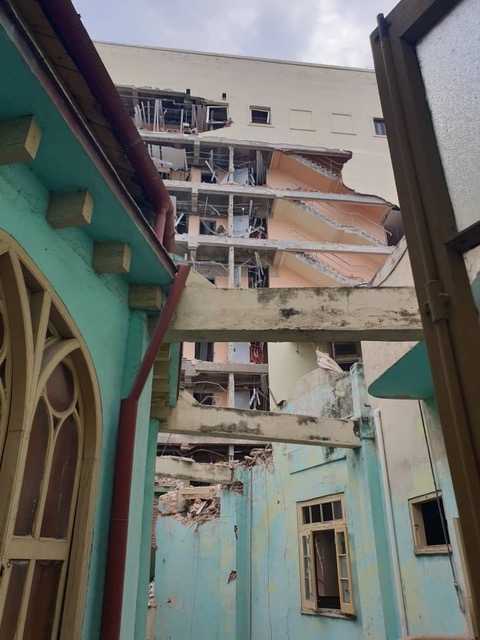 Western Cuba Baptists’ immediate needs, which will require financial resources, are for cleaning supplies and equipment, rental space for church worship and activities, storage for items recovered from the ruins, the ability to secure and protect the damaged location, replacement of needed daily operating supplies, and securing a structural engineering company, Dowdy said.

“A part of Western Cuba Baptists’ history has been severely damaged,” Urbanek said.

“Now Western Cuba Baptists can begin their history anew, building on the legacy of their past and moving forward for the future.”