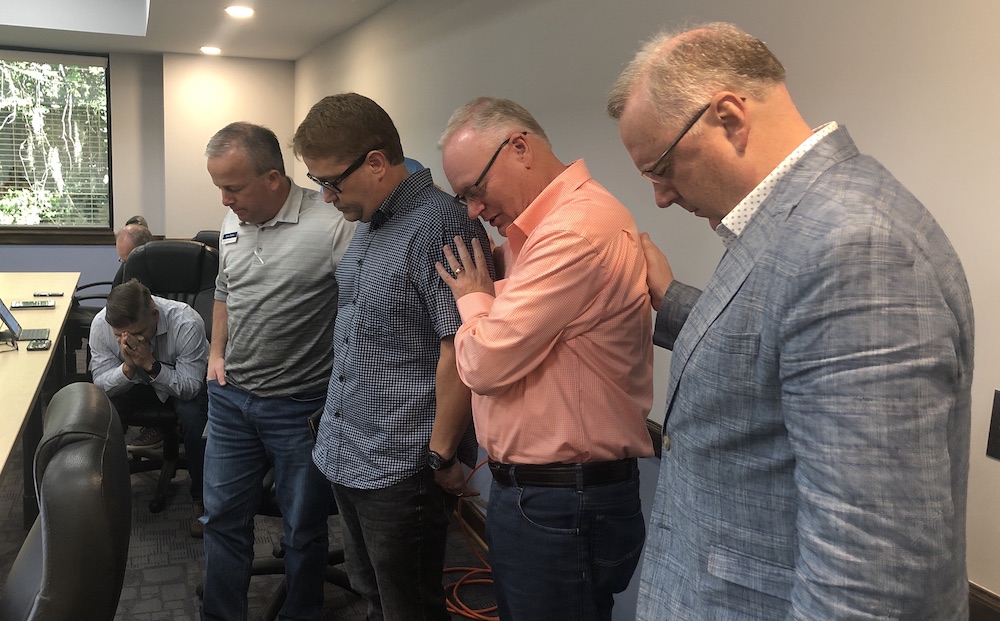 Pictured Above: The Denominational Committee of the State Board of Missions pauses to pray with church planter Pastor Chris Cornette of Mercy Fellowship Church, Venice, after voting to approve the church joining in cooperation through the Florida Baptist Convention.

JACKSONVILLE–Noting that the sexual abuse crisis continues to be at the forefront of concern among Southern Baptists, the State Board of Missions affirmed the importance of protecting the vulnerable and took steps to strengthen screening policies during the Aug. 29 meeting in Jacksonville.

Originally the meeting was set to end with the full board meeting on Friday, Aug. 30. But with the projected path of Hurricane Dorian targeting Florida over the Labor Day weekend, the board meeting was fast tracked to Thursday night to accommodate hurricane preparedness.

Prior to the meeting, Tommy Green, executive director-treasurer of the Florida Baptist Convention, called on the board to lead Florida Baptists in giving to the Maguire State Mission Offering.

“Leaders lead,” Green told members. “You are a leader among Florida Baptists.”

The Maguire State Mission Offering is used to help plant, revitalize and restart churches statewide. The emphasis, observed in September, challenges Florida Baptists to learn about and meet spiritual needs in the state.

During the meeting Green shared with the Board that the sexual abuse crisis continues to be of concern among Southern Baptists. He outlined steps that the Convention has taken previously to create awareness and address concerns among the churches and the Florida staff, including extensive background checks.

The statement adopted by the Board during this meeting encouraged all Florida Baptist churches to “diligently evaluate and enhance their policy and procedures” to protect the vulnerable. It also urged pastors to enhance their efforts to prevent abuse and care for abuse survivors.

Additionally, the statement affirmed the theological guardianship role of the local association and state convention’s determination of a cooperating church as it pertains to a church’s handling of abuse allegations.

The board also adopted its own policy requiring a criminal background screening of all its members. The approved screening process, complementary to the convention’s employee screening process, will be completed at the beginning of each term of service and repeated every three years.

The $30 million proposed CP budget is an amount identical to the 2019 budget and represents the same percentage distribution between national and state ministries. All receipts over the budget amount will be forwarded to the SBC.

Florida Baptist programs of mission, ministry and support will receive $11,710,00 for ministry in 2020. Changes to the Florida budget reflect actual expense trends and personnel expenses including salary increases.

The proposed budget will be considered by messengers attending the Florida Baptist State Convention meeting, Nov. 11-12 in Orlando.

Green explained to the board that church planting and revitalization continue to be the cornerstone focus for Florida Baptists, noting the “phenomenal start” of the newly initiated “Send Network Florida.” In a related matter, the board learned that 67 churches received church planting and revitalization grants from March 1, 2019 through July 30, 2019.

In personnel matters, the board elected Ben Braly of Jacksonville as director of Baptist Collegiate Ministry for the Jacksonville area.

Braly, 33, previously served as youth and recreation pastor at Shindler Drive Baptist Church in Jacksonville from 2015-2019; and as a young professional ministry intern at The Summit Church in Durham, N.C., from 2012-2013. The Dallas, Ga. native received the bachelor of arts degree from Reinhardt University in Waleska, Ga. and the master of divinity degree from Southeastern Baptist Theological Seminary in Wake Forest, N.C.

He has served in this role since July 1, pending full board approval at the August meeting.

With the resignation of Mark MacDonald, who served as Strategic Communication Catalyst since 2017, the Board approved a restructuring of the Convention’s communications functions within the responsibilities of the Director of Strategic Initiatives.

Micah Ferguson, who serves in this role will lead and execute overall communication, promotion, brand management and the news/information strategy of the convention. His previous held duties related to supervision of ministry support team will be reassigned to the executive ministry assistant in the Executive Director Treasurer’s Office, a role filled by Patty Vansant.

In other business, the board:

–approved the transfer of $50,000 from the Convention’s operating reserve fund to underwrite expenses to be incurred by hosting an exhibit and sponsoring “Crossover Florida” in conjunction with the 2020 Southern Baptist Convention when it meets June 9-10 in Orlando;

–transferred $200,000 from the Convention’s operating reserves for capital needs projects at the Baptist Building in Jacksonville and Baptist campus ministry buildings statewide; and

–granted provisional church at large status to Bedrock Baptist Church in Sarasota; and Mercy Fellowship church in Venice until final approval is given by the Florida Baptist State Convention.

The next Board meeting is scheduled for Monday, Nov. 11 in conjunction with the Florida Baptist State Convention meeting in Orlando.

Tommy GreenState Board of MissionsState Board Meeting
0 2,015
Share FacebookTwitterGoogle+ReddItWhatsAppPinterestEmail

After destroying Bahamas, Dorian threatens the state as FBDR stands ready to respond