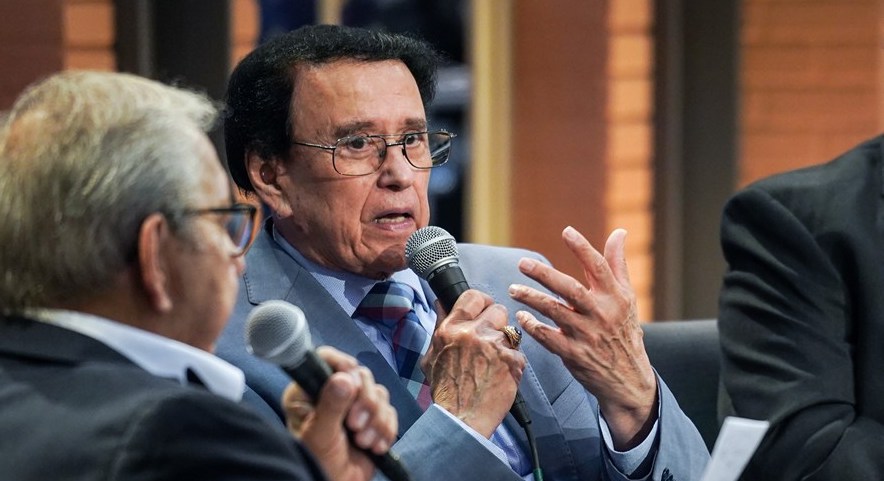 Above Photo: Danny Sanchez, co-chairman of the SBC Executive Committee’s Convention Advancement Advisory Council, discussed the complexities of ministry in Hispanic communities — and ministering in their particular contexts — at a panel sponsored by the Cooperative Program during the SBC annual meeting in Birmingham, Ala. Photo by Lindy Lynch

BIRMINGHAM, Ala. (BP) — Officers of the Southern Baptist Convention’s Hispanic Leaders Council discussed the complexities of ministry in Hispanic communities — and ministering in their particular contexts — at a panel sponsored by the Cooperative Program during the SBC annual meeting in Birmingham, Ala.

During the panel, which was conducted completely in Spanish, moderator Bobby Sena asked the group questions on challenges they face in reaching different groups of Hispanics. They also discussed efficient methods of evangelism, resources they use, and specifically working with Hispanics who are “apartados,” those who once went to church but no longer do.

“These brothers have diverse responsibilities working in different committees but today they represent the SBC’s Hispanic Leadership Council working together for the Kingdom of God,” said Sena, Hispanic relations consultant for the SBC Executive Committee.

The panel was made up by Jonathan Santiago, director of Send Relief of the North American Mission Board; Felix Cabrera, executive director of the Puerto Rico Baptist Convention; Danny Sanchez, co-chairman of Convention Advancement Advisory Council of the SBC Executive Committee, and Victor Pulido, pastor of Iglesia Bautista del Sur El Calvario in Turlock, Calif.

One of the biggest challenges these leaders are facing in reaching Hispanics with the Gospel, the panel noted, is bringing the “apartados” back to church. “Apartados are the largest group (in Puerto Rico), they know of God and went to church but stopped,” Cabrera said. But, he added, since Hurricane Maria, Puerto Rico is experiencing the beginnings of a spiritual revival.

Santiago noted that Hispanics tend to be a largely religious group, and another challenge in ministering to them is showing them the difference between knowing of God and having an intimate relationship with Him.

When it comes to reaching Hispanics of all generations and assimilation levels, Sanchez said the key is to form a “nexus of friendship and a family atmosphere.”

In Texas, where Sanchez ministers, he is finding that the most successful churches in evangelism are those that are studying the Bible in home settings and providing services like English classes and employment preparedness. “It’s about showing them God’s love,” he said.

Language is another component to consider when ministering to Hispanic communities, the panel discussed. Second and third generations tend to speak in English while their parents speak mostly Spanish.

Sanchez noted, “Hispanics retain their culture and language through the generations and that is what brings them to Hispanic churches despite which language they speak most often.”