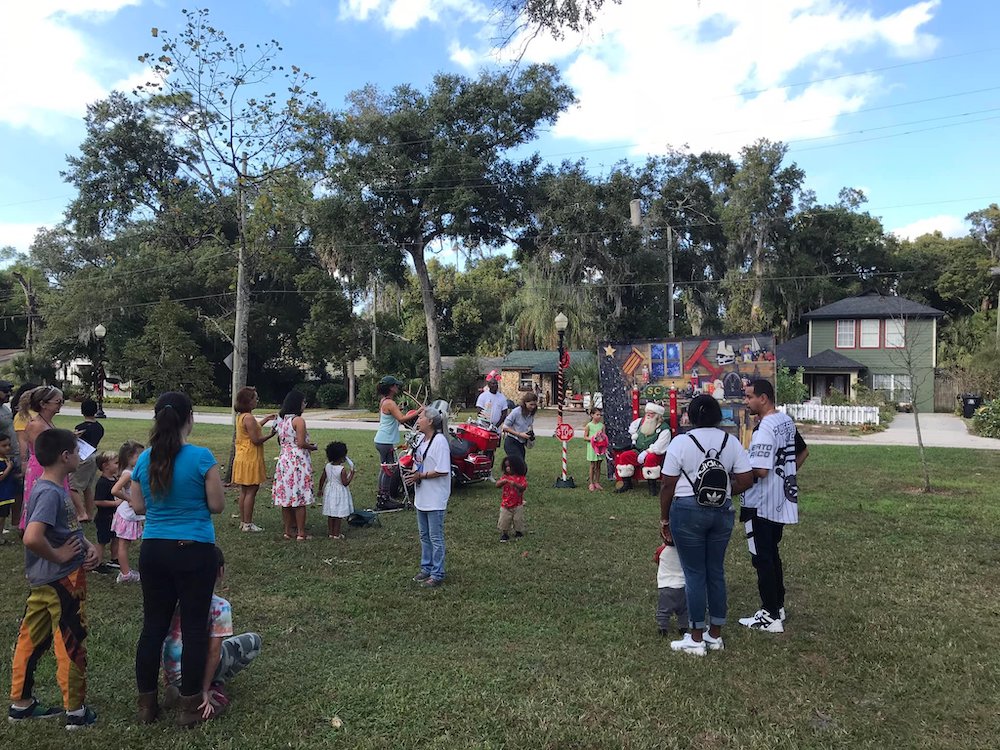 Pictured Above: Redemption Orlando hosted a “Photos with Santa” event in a neighborhood park as part of their year-long pre-launch outreach activities.

When Redemption Orlando launches as a new church plant in October, its goal is to reach those who have fallen away from church and away from their relationship with Christ.

This is a common story for many people, said Andrew Stucker, lead pastor of the church plant.

“We’ve heard that story again and again,” he said. “We’ve been so close to people who have that story, and we said we’d love to help people reignite that relationship with Jesus.”

The church will be located in an area considered highly “dechurched,” a term to describe those who have some knowledge of church and Jesus but are no longer practicing their Christian faith.

“We really want to come in and show people that Jesus isn’t just about coming to church and following religion. Jesus wants to walk with you in all of life, and He wants you to walk with Him,” he said.

That’s why Redemption Orlando’s mission statement is: “We reach all people, with all of Jesus, for all of life.”

Pastor Stucker said, “We’re showing people that Jesus is more than just some religious figure. He’s someone who can truly transform your life. He does that in every aspect of your life. When you come to Jesus, He begins to touch every part of you, and you become a different person. It’s just a better way to live when you’re following Jesus.”

The church will meet on Saturday evenings at 5 p.m. beginning Oct. 1 in an area south of downtown Orlando, or SODO as it’s called. Redemption Orlando is renting space from an existing church that meets on Sundays.

Stucker and his wife Erin are originally from Orlando, so they are excited about planting a church in their old stomping grounds, not too far from where they graduated from high school.

“As we were going through the process with the North American Mission Board to be church planters, God opened the door for Orlando to be the place where we could come,” he said. “And we thought that was just incredible! We still have friends and family here, and we saw how dechurched it had become.”

Redemption Orlando is part of Send Network Florida, which launched 74 churches in 2021 through partnership with NAMB and the Florida Baptist Convention. Receipts from Florida Baptists’ Maguire State Mission Offering each September goes to support new church plants in the state. The need for new church plants like Redemption Orlando is great, according to the Convention, because 75% of Florida’s 21.8 million residents do not have a saving relationship with Christ.

“It’s been a joy to watch how God has been working in and through Andrew and Erin Stucker this year as they prepare to launch Redemption Orlando. Andrew’s giftings and calling are evident,” said James Peoples, director of Send Network Florida. “They are an answer to the Luke 10:2 prayer for the Lord to send forth laborers. Continue to pray for more and more to be sent all across Florida where the fields are so ripe for the harvest.”

The Stuckers and a core group of about 20 people have worked together in pre-launch mode for the past year, getting involved in the community and spreading the word about the new church. They’ve done free photos with Santa in the park during Christmas, hosted a huge Easter egg hunt at a local park, helped with food pantries, held prayer walks in the neighborhood, served underprivileged families, and conducted vacation Bible school.

Redemption Orlando has about six church partners – including Church at the Cross Orlando, its sending church – that have come alongside the church plant to help during this pre-launch phase, providing physical, prayerful and financial support. Some of these partners are new church plants themselves, which has both encouraged and inspired the launch team.

“When these church plants that are just a year or so ahead of you come to you and ask, ‘How can we invest? How can we help?’ you suddenly realize we’re not in competition. We’re partnering in this,” he said. “Once we launch in October, we’re going to see who we can start investing in because we’re not just trying to build our own little castle over here; we’re trying to spread the kingdom everywhere.”

While reception from the community has been positive, Stucker said, many are taking the wait-and-see approach and are reluctant to get involved early due to past hurts and experiences with churches.