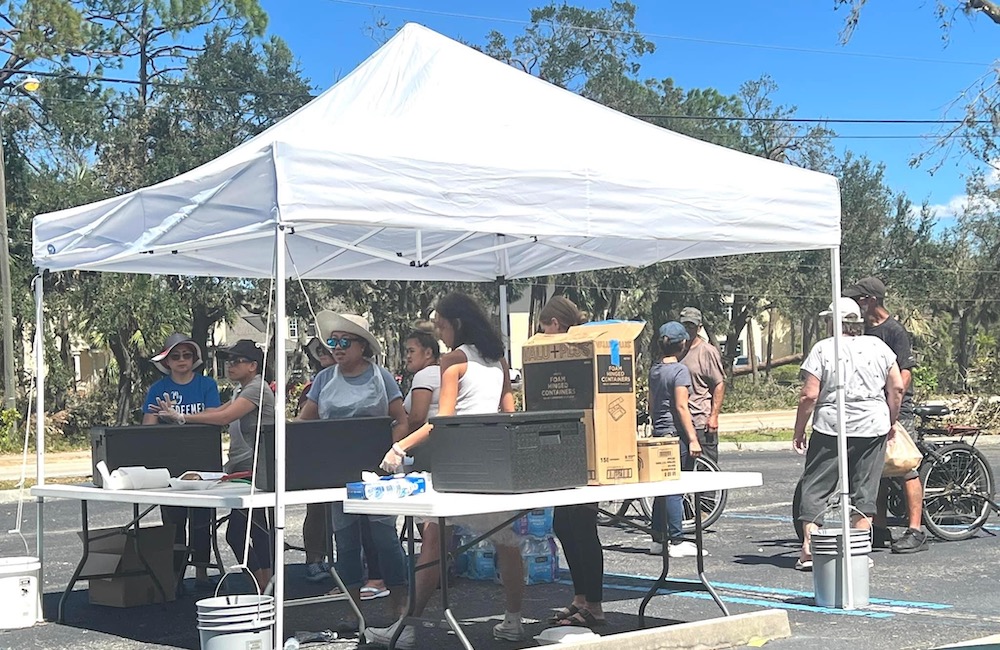 Picking up the pieces after Hurricane Ian

PORT CHARLOTTE–A week ago, Marta Ramirez was settling into her new home in Port Charlotte, a harborside town in southwest Florida. Friday, she was picking up the pieces of what was left after the wrath of Hurricane Ian tore through the community Sept. 28.

Southwest Florida media outlets used words like “staggering” and “overwhelming” to describe the intensity of the destruction Hurricane Ian left in its wake. In a media briefing Thursday, Sept. 29, Florida Governor Ron DeSantis said the state had never seen a flood event of this magnitude. In describing the damage left behind, DeSantis told reporters that areas of southwest Florida “got hit with really biblical storm surge.”

Bringing ‘help, healing and hope’ to those in need

As Hurricane Ian’s storm surge is slowly receding and the winds are subsiding, Florida Baptist Disaster Relief teams–in partnership with numerous other Baptist state convention DR teams–are beginning to respond to the enormous need left behind. 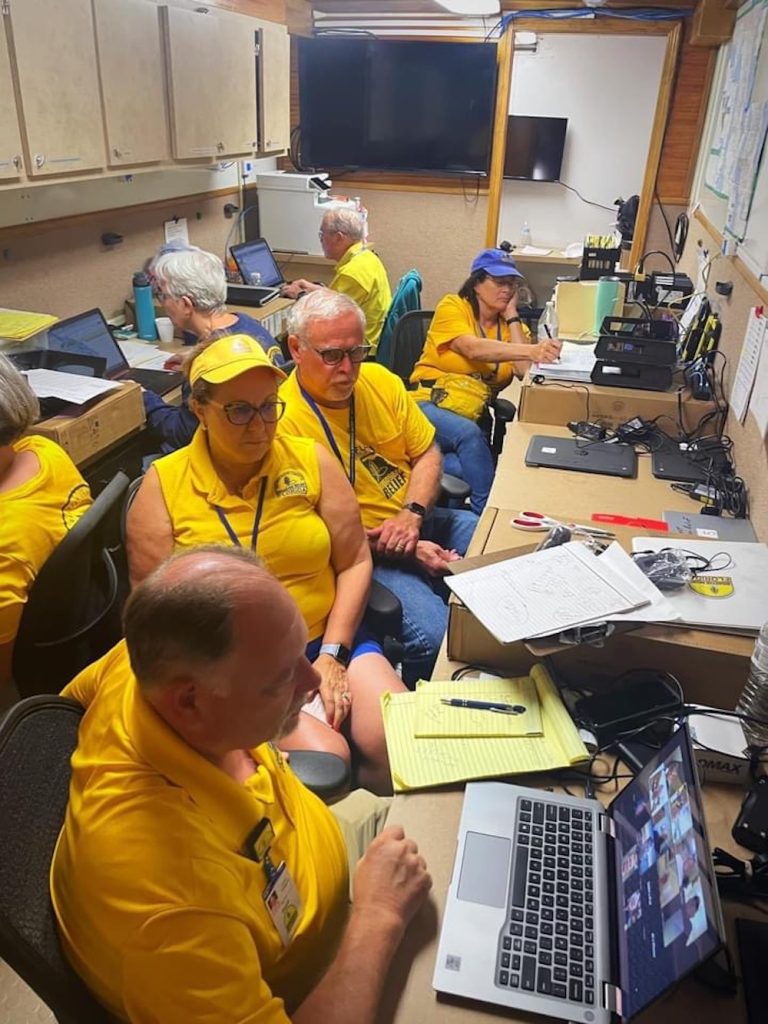 Florida Baptist Disaster Relief teams are responding out of Murdock Baptist Church in Port Charlotte, a Florida Baptist church known for its “missions-minded dedication to serving as the hands and feet of Jesus in their community and relentlessly preaching the gospel,” said Ron Tipton, senior pastor of Murdock.

With Lee County and Charlotte County forced to live off the grid due to the widespread power outages and water main breaks, food ministry is one of the most immediate practical and needed responses.

As a Florida Baptist DR command center, Murdock Baptist Church is able to serve more than 500 meals a day to the public, Tipton said.

“Our site at Murdock Baptist Church in Port Charlotte has been operational since Saturday,” said Coggins. “We have already fed a lot of people, and our cleanup and recovery teams have already been going out and meeting the needs of homeowners.”

The Port Charlotte church is one of nine DR command center sites in southwest Florida. The feeding and cleanup and recovery sites throughout the region are in Port Charlotte, Cape Coral, Wauchula, Venice, Arcadia, Naples and multiple locations in Fort Myers.

“With our nine feeding units that are already up and operational, we have the capacity to feed 160,000 people per day,” said Tommy Green, executive director-treasurer of the Florida Baptist Convention.

In an effort to bring help, healing and hope to those in need, DR volunteers are trained in feeding, cleanup and recovery, on-site management, childcare, chaplaincy, counseling and administrative support.

“This is just a beautiful cooperative effort of the family of God coming together,” said Green. “Be in prayer that God will use this to make His name and fame known in this area and that many people will seek Christ and come to know Him as Lord and Savior through the efforts of disaster relief.” 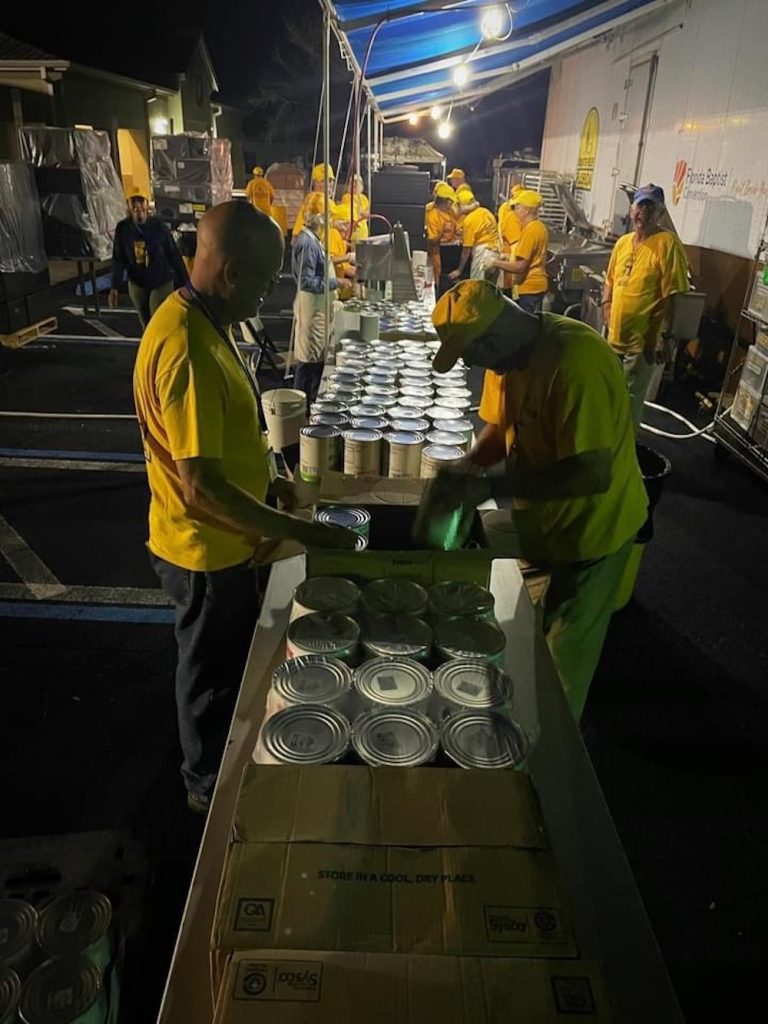 Send Relief, the Southern Baptist compassion ministry partnership between the North American Mission Boardand International Mission Board, is also working closely with FLDR to meet the ever-increasing needs in the storm’s aftermath.

“The American Red Cross has told us they expect a need for at least 4.2 million meals,” said Coy Webb, Send Relief’s crisis response director. “Southern Baptists have established locations for seven kitchens and the potential for three more, bringing our daily meal capacity to 170,000 if that much is needed.”

Webb, who led disaster relief efforts for the Kentucky Baptist Convention for 15 years, said kitchen sites, which were active by Monday, Oct. 3, will continue as long as they are needed.

“We are grateful for the people who are coming from all over to help our community and helping us rebuild our lives,” said Ramirez. “Words just don’t describe how grateful we are.”

For updates on FLDR response go to facebook.com/FLBaptistDR and flbaptist.org/dr-current-response. To give financially in support of these relief efforts go to https://flbaptist.org/dr-give/. Donations of items are not needed at this time.

Pray for Cuba: A message from Kurt Urbanek, International Mission Board strategy leader for Cuba