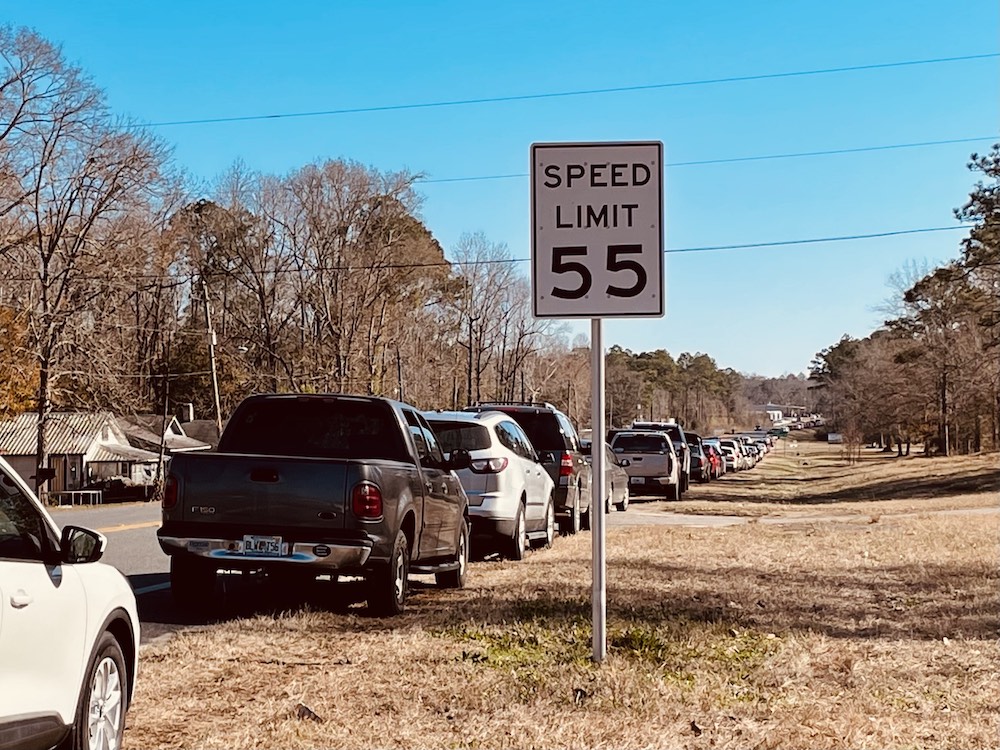 Pictured Above: Pastor Shelly Chandler snapped this photo on the way to pick up groceries at Walmart. He later decided he would tell the line of people about Jesus while they waited for their vaccine.

BONIFAY–Pastor Shelly Chandler was on his way to Walmart to pick up groceries Jan. 5, when he came upon a line of vehicles stretched along the side of the road.

The line, he soon realized, were hundreds of people anxiously waiting to receive COVID-19 vaccinations from the Holmes County Health Department.

Not one to miss an opportunity to share the Gospel with anyone who has a spare moment, Chandler, pastor of First Baptist Church in Bonifay, returned to church and with his staff quickly devised a plan, aptly named, “Car to Car Evangelism.” The group went back to the line that day.

Staff members stopped at each vehicle in line to talk, visit, and pray with anyone willing to listen. They were able to share the Gospel with hundreds of people awaiting their turn to be vaccinated. Some people sat in their cars for over six hours in the two-mile line that stretched from the AG Center to State Road 79 toward the health department annex. Most were very receptive to hear what the church staff had to say.

“Some cried while we prayed for them and some were dealing with fear of the virus and the vaccine,” Chandler said.

The pastor and his team responded to those worries by sharing the hope found in Jesus Christ and the peace that a relationship with the Lord will bring. Their afternoon of evangelism had Kingdom impact.

One man, who said he was member of the Jehovah’s Witnesses, drove to the church after receiving his vaccine, and asked to learn more about the Gospel. The staff happily told him more, prayed with him and gave him a Bible.

In days following, family members called to say they were thankful the staff took the time to pray with their loved ones.

On Jan. 12, the Health Department once again offered the vaccine. And again, the line stretched two miles, and the Bonifay staff was ready and willing to minister. Some of the people had come from surrounding cities and even surrounding states for their opportunity to receive the vaccine.

That day they met Ed, a Vietnam War veteran.

“As we talked, he explained that he had killed many (people) in Vietnam and did not feel that God would save him,” Chandler said. “I told him King David’s story and how many battles he fought, how many people he killed, and that God loved him and made him King. After this reassurance of the love of God, Ed gave his life to Jesus.”

Following Ed’s eternity-changing decision, his wife said, “I have been praying for Ed’s salvation for many years and I never dreamed it would happen in the COVID-19 vaccine line.”

By the end of January, Holmes County had administered 1,960 doses of the COVID-19 vaccine.

For the next round of vaccinations, the church staff is once again developing plans to witness to those being vaccinated and to prepare lunch for the healthcare workers.

In the coming weeks, doses of the vaccine are expected to be given by appointment only, but Chandler isn’t giving up on his newfound mission field. He is working with the health department to find new ways of involvement.

“After these events, I remembered that we live in a changing world and we need to find new ways to deliver the Gospel to our world,” he said. “People are out there waiting in line to hear the Gospel. We must distribute it, or people will die without it.”