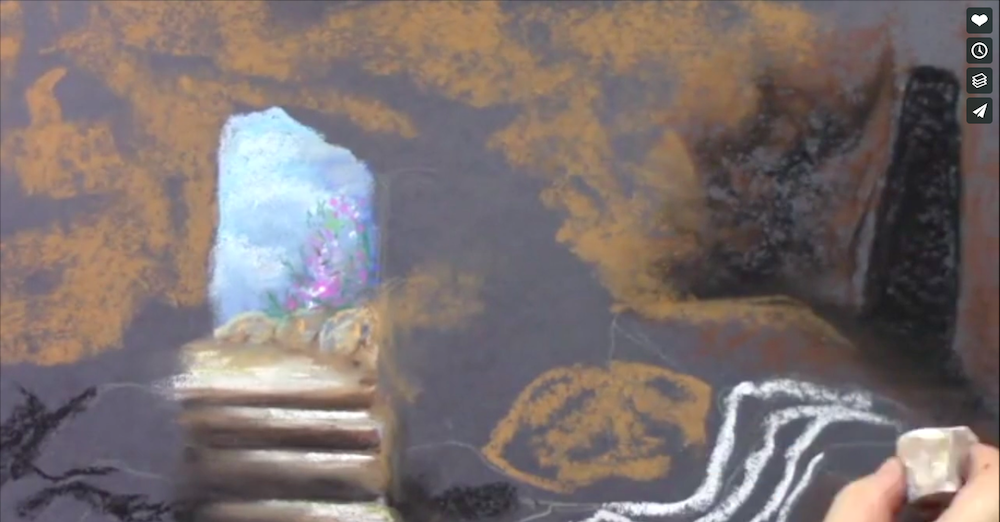 GAINESVILLE–Family Pastor John Park is putting an artistic and captivating spin on the weekly devotional he creates for his church members during these home quarantining days of the COVID-19 pandemic.

Created for the families of Westside Baptist Church in Gainesville, the devotional videos feature Park creating a work of art that illustrates the theme or topic of the Bible lesson he is teaching. Viewers see him draw a picture from beginning to end using paint or chalk while he shares truths from God’s word and classical music plays in the background.

The instrumental music and Park’s soothing voice are inviting, but it’s the first stroke of paint or line of chalk that really pull you in. You can’t help but want to see the final creation, like the beautiful watercolor image of Jesus calming the seas in the fishermen’s boat, or the impressive chalk drawing depicting the empty tomb for Easter.

Stroke after stroke, note after note, word after word, the story and the artwork grow into a devotional masterpiece. You’re left feeling inspired by both Park’s biblical teaching and his artistic talent.

“Jesus did not come to this world to take away all of our problems and woes,” Park said in the devotional on faith. “He came to show us how to live in the midst of storms, trials and even persecutions.”

As Westside switched to online services in March due to the pandemic, the pastors were tasked with thinking creatively for reaching out to their members at their homes. “I thought it would be a great idea to be able to do some stories for the kids and illustrate them with a piece of artwork,” he said.

Designed for families with young children, the videos are two-to-six minutes long. Because it takes him between 30 and 60 minutes to create the artwork, Park uses a time-lapse effect to speed up the process for viewers. He uses his phone to video himself creating the art and then spends another hour creating the final video, including adding the music and his voiceover.

While this series of family devotionals are new, Park has been incorporating art into his ministry for many years.

“I can go and speak to a group of kids and do all sorts of fun things, but you’ll still have them all squirrelly,” he said with a laugh. “But pull out something and start drawing and it is completely silent, and they are drawn into it.

“I’ve been in family ministry for almost 25 years and I think it is the best tool that I have in my toolbox,” he added.

In creating this series of devotionals, Park said he focused on the Lord’s character and how it might help kids during this time.

“I started off with prayer and then we went to faith. Then we got into the prep for Easter, so I started looking at love and hope. I was hoping all of these would give the kids some characteristics that would help them and keep their minds off all that’s going on.”

The video devotions have become so popular that the Canadian National Baptist Convention has begun offering them as a resource for its churches. In fact, Park created one for a church in Quebec using a voiceover provided in French.

Park, who received his bachelor’s degree in art and religious studies from Dallas Baptist University, has always enjoyed art. He began teaching art classes last fall to help raise funds for a sabbatical he is taking later this year. He loves being able to use this talent for Christ.

“Art is very difficult to use in the church,” he said. “I do murals and I do different things, but this has proven to be one of the best ways to minister to kids. My heart is the family so this has really been a blessing.”