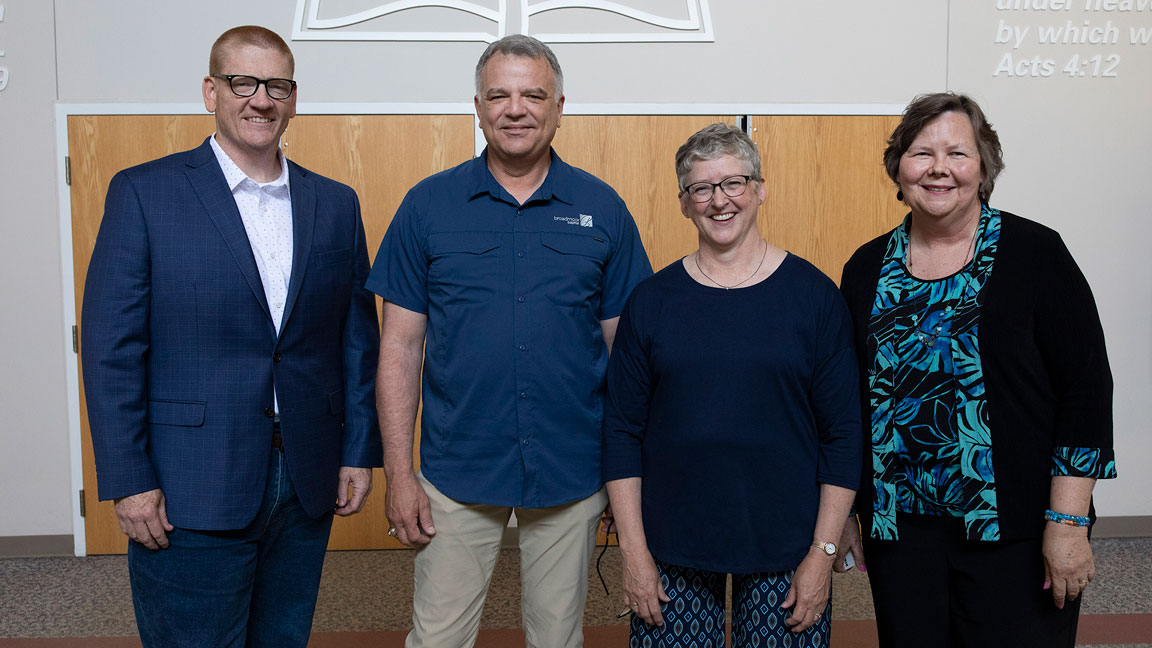 International Mission Board trustees approved the appointment of 26 new missionaries to take the gospel to the nations during their May 22-23 meeting in Richmond. Trustees also considered pivotal changes in ministry advancement and prayer strategies; welcomed a report from Adam Greenway; heard an update from external examiners; and elected 2019-2020 officers.

The new missionaries will be commissioned for service at a Sending Celebration June 11 at 4:20 p.m. during the afternoon session of the SBC annual meeting in Birmingham, Alabama. The service will be live-streamed on sbc.net.

In his address to the board of trustees, IMB President Paul Chitwood referenced Revelation 7:9: “After this I looked, and behold, a great multitude that no one could number, from every nation, from all tribes and peoples and languages, standing before the throne and before the Lamb, clothed in white robes, with palm branches in their hands crying out with a loud voice, ‘Salvation belongs to our God who sits on the throne, and to the Lamb!’

“They are worshiping — worshiping the One who is worthy,” Chitwood said. “We call that the IMB’s vision, but we’re always quick to point out that it is, first and foremost, the vision of the Church.”

He said the fulfillment of that vision takes people such as Brian and Ronda Massey, IMB missionaries deep in the mountains of Colombia who are not deterred by immense challenges: hours of “beating and banging” in a four-wheel-drive pickup to get where they’re going; rains that bring flash flooding; military checkpoints on their way up the mountain; or rebel-controlled checkpoints once they are on the mountain.

“They are not dissuaded because, there in the mountains, there is a people who haven’t yet believed and, should the world end today, that people won’t be there, standing before the throne,” Chitwood said. “And that is unacceptable because the Father gave the life of His only Son for them to be there.”

The Masseys are choosing to live — and, if called upon, are willing to die — to see that vision fulfilled, he said. “And all over the world today, in mountains, on the plains, in the sprawling cities, along the coastlines, in the jungles and villages, and refugee settlements, and bombed out buildings where people shift about in the rubble, IMB missionaries will go and they will share, choosing to live and, if called upon, willing to die, in order to see the vision fulfilled. And they go with an unshakable confidence that the vision of the Church, the vision of heaven, will be fulfilled.”

“And that’s why we are here,” he told trustees. “We are here to ensure they can go out there. We are here to do everything that needs to be done — everything that has to be done — to give them the support they need, the training they need, the resources they need to be as effective as they can be as they go. Just as much as they are doing their job in fulfillment of the vision, we must do our job in fulfillment of the vision.”

Chitwood announced Ministry Advancement/Fund Development and the IMB Prayer Ministry will be moved to the President’s Office in an effort to elevate resourcing the mission. Funding the mission has been one of the greatest challenges facing the IMB over the past decade. He said that challenge compels senior leaders to do a better job of letting individual donors know about opportunities to worship God and fulfill the Great Commission through giving.

“We also know that personnel and personal checks are not our greatest resource in fulfilling the Great Commission,” he said. “The Holy Spirit of God is our greatest resource. We tap into that resource through prayer.” To reinvigorate prayer support, the President’s Office will oversee the IMB Prayer Ministry “to invest ourselves more heavily in appealing to the One who Reigns over the nations to give us the nations.”

Dr. Adam Greenway, who was elected president of Southwestern Baptist Theological Seminary, Fort Worth, in February, brought greetings and an update from the seminary.

“Southwestern Seminary desires to be the greatest partner and friend we can be with you,” Greenway said. “We come not to be served, but to serve. … Our seminary has been the place where thousands of men and women over our 111-year-history have sensed God’s calling or further developed God’s calling to go the nations. Southwestern Seminary, in our history, has been the greatest provider of people — God-called men and women — who have come through the FMB (Foreign Mission Board) and the IMB. … Our Great Commission roots run deep. That is not the metric that is true today, but I am committed to doing all I can as president of our seminary to work with the IMB to see that situation turn around.”

Every missions faculty member at Southwestern is IMB-experienced, Greenway said, representing nearly seven decades of missions experience. The seminary will never have a missions professor who is not an IMB veteran, he committed.

Reporting that more than 320 unreached people groups reside in the Dallas/Fort Worth metroplex, he said Southwestern Seminary “may be the most providentially situated of the six seminaries for having a field-laboratory for field engagement and for reaching the nations. God in His kindness has positioned our seminary to be the kind of place where people can come to get hands-on experience in reaching people who are lost in spiritual darkness.”

Trustees heard recommendations Wednesday (May 22) from the firm conducting an external examination of IMB’s handling of past allegations of child abuse and sexual harassment (including sexual assault) and IMB’s present policies and practices. Chitwood responded immediately with an apology to victims and a pledge for the future. Leaders also expressed their affirmation of the examination.

“On behalf of the trustees, I’m grateful that we walked through this process,” said Lisa Lovell, a trustee officer who represented IMB on the task force. “One instance of abuse is one too many. We’ve learned so much, and implementing the recommendations will help us improve our prevention and response efforts.”

In his plenary address Thursday, Chitwood said the IMB’s efforts to see the vision of Revelation 7:9 fulfilled have included “such pressing assignments as taking significant steps forward to help guard the safety of every missionary, staff member, TCK (third-culture kid), volunteer, and national partner from abuse. Those efforts have included acknowledging past failures, repenting of them, and apologizing to those who have been harmed. Make no mistake, that is not a distraction from our mission of seeing the vision fulfilled. It is vital to our mission. Thank you for understanding and affirming that as our governing board.”

Trustees adopted a resolution of appreciation for the service of Gena Wilson, missionary to European peoples from 1995-2000 and 2001-2019, who died May 13. The resolution read: “The International Mission Board, Southern Baptist Convention, herein expresses appreciation for faithful service to God through this board and pledges special prayer support for the family during the days ahead.”

Outgoing trustee chairman Rick Dunbar told of visiting IMB personnel last year in Africa. While floating in a boat along a river, Dunbar asked a missionary about her work. She told how they use SD cards to share the Bible, the JESUS Film, and other gospel resources with people in their heart language. One particular day, the SD cards were popular, and the team gave them all away.

“Later in that day, a young lady came up to our missionary and said she wanted to know more about Jesus,” Dunbar recalled. “Our missionary told her about Jesus, but the lady was distraught they were out of SD cards.” She wanted a resource to take home, and she asked the missionary to check her bag one more time to see if any were left.

“To prove there were no more, the missionary took the bag she brought the SD cards in and turned it up and shook it,” he said. “She knew the bag was empty, but somehow one SD card fell out.”

The same thing happened again. And again. Three times the missionary checked her empty bag, and three times an SD card loaded with the Bible in the heart language of the people fell out of the bag.

“We know that God’s Word never comes back empty (Isaiah 55:11), but accomplishes His will and His purpose,” Dunbar said in ending the meeting — and his service as an IMB trustee. “I wonder what God wrote on those SD cards? … God stepped in miraculously and provided. One day when we get to heaven, I want to know the rest of that story.”

The next IMB trustee meeting is scheduled for Sept. 25-26 in Richmond, with a missionary Sending Celebration at Swift Creek Baptist Church in Midlothian, Virginia.

Sending and Sowing in Yulee

Multicultural Pastors and Wives Gather for a Night of Encouragement, Fellowship