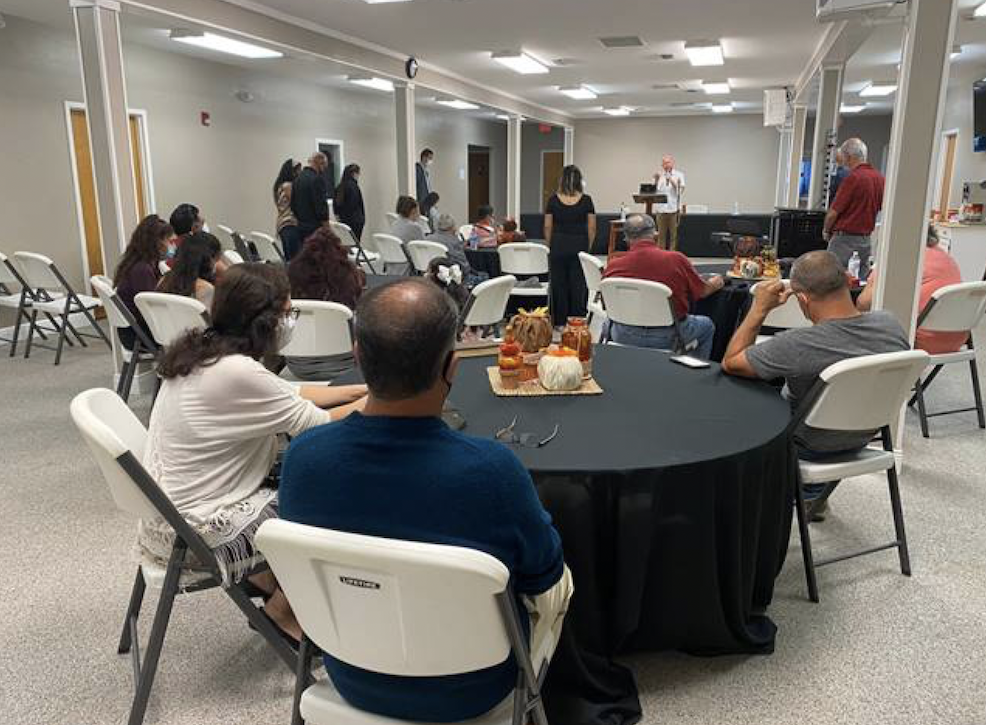 GULF BREEZE–After arriving in the States from Colombia, Gabriel Vargas was washing dishes in a high-end Ponte Vedra restaurant when “Jesus Christ found me in 2003,” he said. “I was lost, He found me.”

The 34-year-old had been given a rare Sunday off when he attended a small Spanish chapel and for the first time heard the gospel message proclaimed in his own language. He made an immediate commitment to accept Christ as his Savior. Soon Vargas’ work hours were switched to weekdays allowing Vargas to attend Iglesia Bautista Neptune, where Pastor Victor Reyes began discipling the new Christian.

After he moved to Pensacola, God called him to plant Mision Casa in Gulf Breeze four years ago to reach Hispanics in the region. As he leads the church that had grown to two campuses and 115 members before the pandemic hit, the bivocational pastor, now 51, drives for Uber, Dash, and works as a television technician to supplement his salary to care for his wife and two teenage boys.

Zelvis Applin also works multiple jobs to support his family as a bivocational pastor and church planter in South Hillsborough County. He was serving on staff of another church in the area, when “the Lord told me to plant a church in Wimauma,” a primarily Hispanic agricultural community that is now experiencing rapid growth of all demographics.

Yet the former college track and field athlete discovered he lacked leadership skills necessary to guide his congregation. “Access to education is one of the most powerful tools,” he said. “Knowledge helps me be a better leader, shepherd and minister to my people.”

Vargas and Applin are among ten bivocational pastors in the state who will receive scholarships to participate in a newly accredited program of theological education at The Baptist College of Florida. The scholarship recipients represent every region in Florida, reflecting a diversity of languages and ethnic backgrounds.

The scholarship program designed for the bivocational pastors is a joint initiative between the Graceville college and the Florida Baptist Convention.

The program was born in the heart of Tommy Green, Florida Baptists’ executive director-treasurer. “Bivocational pastors carry a tremendous load with their career, family and ministry. Many of them were called into ministry after years in a career and did not have an opportunity for formal theological education,” he said.

“The scholarships enable us to minister to these pastors by providing quality, accredited education that can be transferred to any future degree program,” he noted. “The theological training will be designed to fit in their already crowded schedules.”

The pastors will receive credit for eight, three-hour courses that are scheduled to begin during the Spring semester.

“We want to say, ‘We see you; we hear you, we’re thankful for your ministry.’”

To Green, the partnership is a win-win opportunity. “We want to continue to invest in the college and invest in our pastors.”

Funds to underwrite the scholarship program came from a $35,000 gift the college presented to the convention from the down payment received from the sale of Blue Springs Baptist Conference Center. The convention had donated the Marianna retreat center to the college in 2016, but after Hurricane Michael struck the region in 2018, the school could not afford to repair the damage.

BCF President Thomas Kinchen presented the check to Green during the Sept. 18 State Board of Missions meeting. At that time, Green said the funds would be invested back in the school.

“I am delighted to participate in this unique program for bivocational ministers,” said Kinchen. “Thousands of Southern and Florida Baptist churches are led by these special servants of our Lord.”

Noting that all of his pastors during his first 25 years of life were bivocational, the BCF president said, “They made a permanent impression on my life. At one time they were called ‘parttime preachers.’ The truth is that they are double duty, double dedicated ministers.”

Kinchen said the partnership stresses the importance of these ministers to the convention and college. “It also points out the close bond and working relationship between these cooperating ministries. I am grateful to be a part of the Florida Baptist family.”

Vargas believes this scholarship opportunity will assist him as he teaches and disciples other Hispanics, especially in area of sound doctrine.

“I am thankful for the convention and Dr. Green’s leadership, love and vision, not only for the Hispanics, but every race and nation living in Florida,” Vargas said.

Applin echoed his appreciation to Florida Baptists. “Thank you for making an investment in pastors of churches that don’t have resources to grow stronger and to become better equipped for ministry.”

Brothers share vision of planting churches in Jacksonville and Titusville