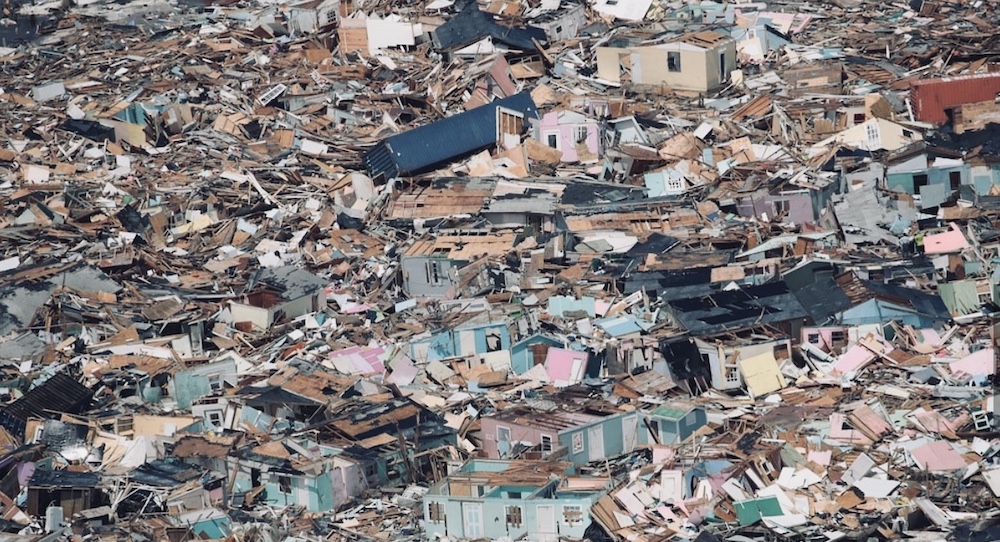 JACKSONVILLE–The utter destruction Hurricane Dorian wreaked on his homeland in the Bahamas is “too much to wrap my head around,” said Jacksonville pastor Kenny Roberts.

“I have watched a lot of storms come and go. But this is just complete devastation.”

The catastrophic storm hammered the island chain Sept. 1 with 180 miles per hour winds, the strongest recorded in history. Then for two days, Dorian stalled over the Great Abaco and Grand Bahama islands, chewing homes, businesses and people’s lives into little pieces. At least 30 people have been killed but hundreds are still missing. Thousands have been left homeless.

Roberts, who was raised in Spanish Wells, said many friends and extended family live on these northern islands. While he has heard that some have survived, communication is challenging.

“The hardest part is feeling helpless and knowing it’s not just that people had damage to their homes,” said the pastor of MissionWay Community Church. “It’s that so many people have lost everything. Some say it’s unlivable.”

“Our hearts hurt,” said former Florida pastor Randy Crowe of New Smyrna Beach. For 12 years until his retirement in January, Crowe served as pastor of New Life Bible Church in Man O War Cay on Abaco Island, one of the hardest hit communities. He will fly back to the church on Sunday, a week after the hurricane hit.

“We need to be there, to love on our people and just hug their necks,” he said choking back the tears.

Crowe reported that he talked to church members Cindy and Will Weatherford Tuesday night via satellite phone. “They said ‘Pastor Randy. It is devastated. Everything is demolished. We know you are coming.’”

According to media reports, Man O War Cay was so ravaged by the storm it took three days before outsiders could make their way to the island with 300 in population.

Though he has moved back to Florida, Crowe continues to return to the Bahamas with Island Outreach, a ministry he and his wife Paula established and led for more than 20 years.

When he flies the ministry’s 1976 Cherokee Six 300 back to the islands this weekend, they will take needed supplies.

The Florida Baptist Convention gave $10,000 to Island Outreach to provide immediate relief to the islands.

Many Florida Baptist churches are quickly responding to the humanitarian crisis caused by Dorian.

“The Bahamas is only 90 miles away from me,” said Martin Vargas, pastor of Iglesias Real in Hollywood. “It would be unforgiveable if I saw the needs of this country and didn’t respond.”

Vargas has led his church to partner with 33 countries, which will now include the Bahamas. When Puerto Rico was destroyed by Maria in 2017, church members immediately traveled there to make assessments on the ground and gather logistical data to establish “centers of hope and health” throughout the country. Vargas said they plan to use a similar strategy to connect communities in the Bahamas where generators, chainsaws, water filtration systems and commercial kitchens can be located.

Once the centers are established, response teams and churches can channel food, medicines and supplies while assisting with reconstruction, which he predicts will take years.

The Florida Haitian Baptist Fellowship has also pledged to help their Bahamian brothers and sisters, many whom are also Haitians.

Working with BGR, Olive Church in Pensacola is already collecting supplies to send to the Bahamas.

Pensacola knows firsthand how devasting a hurricane can be. Numerous hurricanes have hit the Panhandle city, including the devastation wrought by Ivan in 2004.

“So many have helped us through the years,” said pastor Ted Traylor, “and we are just trying to do the right thing in giving back.”

According to Myles Dowdy, Florida Baptists’ lead catalyst for missions and ministries, the Convention will work through local congregations both in the state and in the Bahamas to provide help to the hurting Bahama residents.

Dowdy said the “greatest part of our coming beside the churches in the Bahamas is through our daily prayers for them.” He suggests Florida Baptists pray for physical and emotional safety for the people of the Bahamas, first responders and for churches that will be generous and bold during this time of crisis.

“We are praying that the churches in the Bahamas will be a lighthouse to their communities during this difficult time and that God will be glorified as the wonderful good news of the salvation of Jesus is shared throughout the Bahamas.”

To provide financial resources to help the people in Bahamas, contributions may be made goBGR.org.