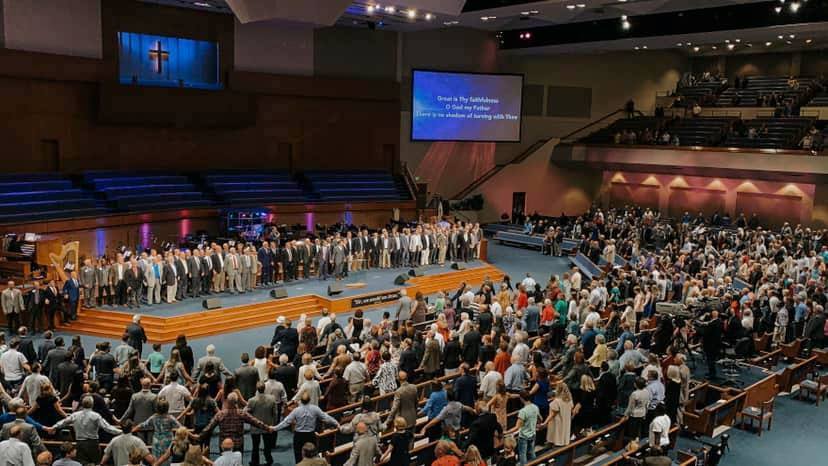 JACKSONVILLE, Fla. (BP) — The historic First Baptist Church in Jacksonville plans to downsize its sprawling 10-block campus to just one beautifully designed block to cut expenses and more effectively serve the city in the name of Jesus Christ.

On Sunday (Sept. 8), the congregation approved a plan to borrow $30 million to finance the project that is expected to take between 18 and 24 months to complete. The project will center on restoring Hobson Auditorium as the church’s main worship facility.

“This block, located on Church Street across from City Hall, will become a beautiful facility, that we will use to welcome our city to worship, and out of which we will serve our city in the name of Jesus Christ,” said senior pastor Heath Lambert in a statement. “This will include the renovation of our oldest sanctuary and one of the oldest buildings in downtown Jacksonville — the historic Hobson Auditorium.”

Also approved was the sale of the remaining property downtown which covers six full blocks and portions of three other blocks. Asking price for the property and timeline for the sale haven’t yet been determined. Money from the sale will ultimately be used to pay off the loan financing the project.

Spiraling maintenance costs and years of decline in attendance prompted Lambert to urge the church to take action, according to The Florida Times-Union.

“When I became senior pastor of First Baptist I expressed a dual desire to stop our church’s years-long decline in membership, and to be a better neighbor to our city,” Lambert said in his statement. “The initiatives I announced and our church approved on Sunday, September 8 helps to accomplish both of these desires.”

Nearly 37 percent of the church’s budget is reportedly required to maintain the aging buildings and its infrastructure and still, that is not enough to take care of everything ailing the property, Lambert noted.

With current attendance numbers, the church only needs 182,000-square feet of space for Sunday morning activities and Hobson Auditorium is reportedly the only block that meets that requirement. First Baptist’s current average attendance is between 3,000-3,500 on Sunday, according to Scott Connell, pastor of worship and communications.

When the project is complete, Lambert said Hobson Auditorium will be restored to once again serve as the church’s main worship center, according to the church. The adjacent administration and Lindsay buildings will be renovated into state-of-the-art educational, gathering and administrative spaces.

The church also plans to launch satellite campuses to bring the church near the city.

“Instead of asking Jacksonville to come to one, large campus of First Baptist in downtown Jacksonville, we will take our church to them in smaller facilities throughout the region,” Lambert said in his statement.

The church has seen this work well with the launch of their newly constructed Nocatee Campus which has experienced “exciting growth in the few months since opening the new facility,” Lambert said. “We want to replicate this model throughout the various regions of Jacksonville.

“I think it’s the right thing to do. It makes sense to do this,” Melanie Dietermann, who began attending the church about two years ago, told the Florida Times-Union.

“We can’t keep spending so much money on upkeep that we can’t afford mission trips to bring Jesus to people,” said Dietermann, noting that the church was forced to cancel its mission trips this year because of the burgeoning financial woes.

John Sullivan, the church’s pastor of education for senior adults, told the congregation First Baptist “must continue to be the Gospel preaching center of downtown Jacksonville,” reported the Florida Times-Union.

Sullivan said the plan will preserve the church and move it forward in its ministry.