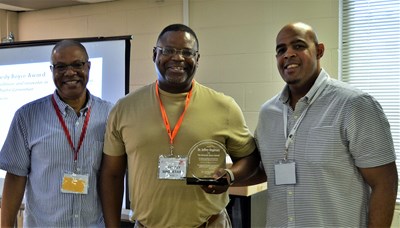 Singletary was given the accolade for being a “trailblazer and innovator in Southern Baptist life” as reported by Baptist Press.

“I was honored to be selected to be a recipient of the Kennedy Boyce Award,” Singletary said. “It is always nice for others to recognize God’s hand and blessing on your life. My heart and desire is to make more of Him and less of me! I must decrease that He might increase.”

Tommy Green, executive director-treasurer of the Florida Baptist Convention, said the award is indicative of Singletary’s “heart of ministry.”

“The focus of being ‘Right Beside You’ of the Florida Baptist Convention team is clearly reflected in this award,” he added.

Singletary was recognized for his work through Huddle Touch, a ministry he founded that focuses on engaging student athletes and coaches in the Greater Hillsborough County area. Through pre-game meals, mentoring, bible studies and fellowship opportunities, churches in the area are able “to share and show the love of Jesus Christ to young people” in a “simplistic and practical way,” according to the ministry’s website.

Singletary was also recognized for ministry he’s done in conjunction with his role as a Florida Baptist Convention Regional Catalyst in the U.S. Virgin Islands. Since Hurricanes Irma and Maria in 2017, Singletary has played an important part in helping Florida Baptist churches connect with ministry opportunities in the islands after many were left devastated from the double-impact of the two Category five storms. You can find out more about the ministry taking place in the islands here.

The Kennedy Boyce award is named after the first two African-American pastors to join the Southern Baptist Convention in 1953.

Green believes the recognition Singletary has received is symbolic of the faithful ministry of the entire Florida Baptist team.

“Jeffery has distinguished himself through his ministry to pastors and churches as a Regional Catalyst,” he said. “I am grateful for the high capacity individuals who are part of our Florida Baptist family!”