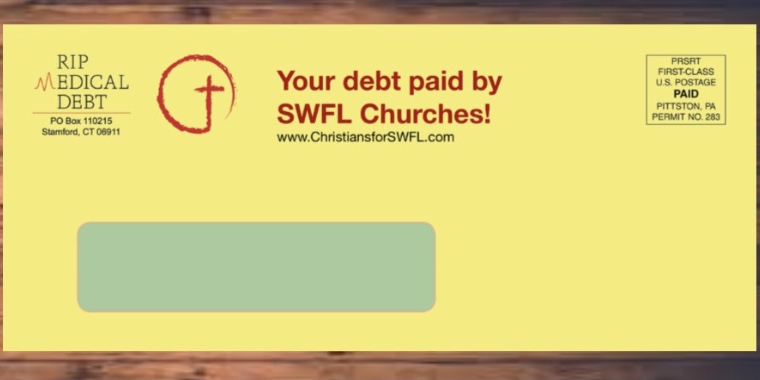 There is nothing like twinkling lights, peppermint hot chocolate, smells of gingerbread, ringing sounds of jingle bells and receiving an unexpected Christmas gift to bring out the holiday spirit.

Over the next couple weeks, many southwest Florida residents will not only receive wrapped gifts from friends and family, they will discover a Christmas surprise–a bright yellow envelope stamped with a bold, red headline that reads “your debt paid by SWFL churches!”

Churches in southwest Florida are partnering with RIP Medical Debt to eliminate thousands of dollars in medical debt owed by families in the region. To date, there is $28.7 million in crippling medical debt effecting over 20,000 families living in more than 11 surrounding counties.The churches’ goal is to eliminate all $28 million in medical debt, which will require a little over $280,000 in funds.

According to Mark Gonzales, director of missions for the Royal Palm Association, the ministry provides an opportunity for churches to demonstrate forgiveness as a means of sharing the gospel in their communities this Christmas season.

“We wanted to get in on this multi-denominational effort and use it as a bridge to share the gospel,” said Gonzales.

RIP Medical Debt is a not-for-profit agency that locates and purchases medical debt–for pennies on the dollar–from bill collectors on behalf of local groups–canceling the debt in its entirety. For every $100 donated to RIP Medical Debt, $10,000 is forgiven. Although it may sound too good to be true, since 2014 RIP Medical Debt has abolished over $950 million in destructive medical debt across the country.

“I think it’s the greatest blessing there is to be able to help your neighbor,” said Terry Smith, the organizer of the RIP Medical Debt campaign taking place in southwest Florida. “It’s exactly what we’re called to do!”

Just in the past several months, several Florida Baptist churches have abolished over $3 million in medical debt for residents in their communities, after providing the initial $30,000 in funds. These churches included: Caloosa Baptist Church in LaBelle; Legacy Church in Estero; Grace Baptist Church in Cape Coral; Vision Baptist in Bonita Springs; and Morningstar Baptist Church in Fort Myers.

Of the 11 counties in southwest Florida, Hendry County donors lead having paid over $500,000 in medical debt for 350 families. Lee County contributions came in second, having paid $30,000 and impacting 60 families.

One of the recipients of this unexpected gift is Dora Banks, a 67-year-old grandmother who underwent triple bypass surgery and had over $4,800 in medical debt paid in full. “I couldn’t believe it,” said Banks. “I’m still thanking God every day for this gift!”

A Christmas miracle can come in many different forms. However, this Christmas, for Banks and many others, it will come in the form of a bright yellow envelope proclaiming that their medical debt is paid in full.

If you would like more information or would like to donate to help relieve the medical debt burden facing over 20,000 families in southwest Florida, please visit christiansforswfl.com.

A Christmas Prayer from Dr. Green