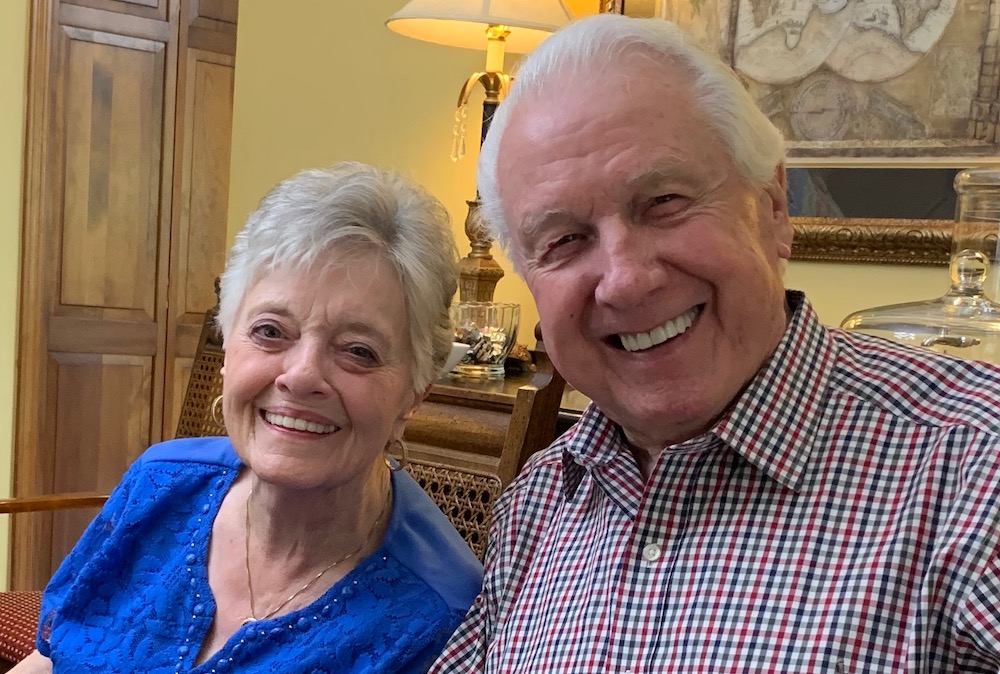 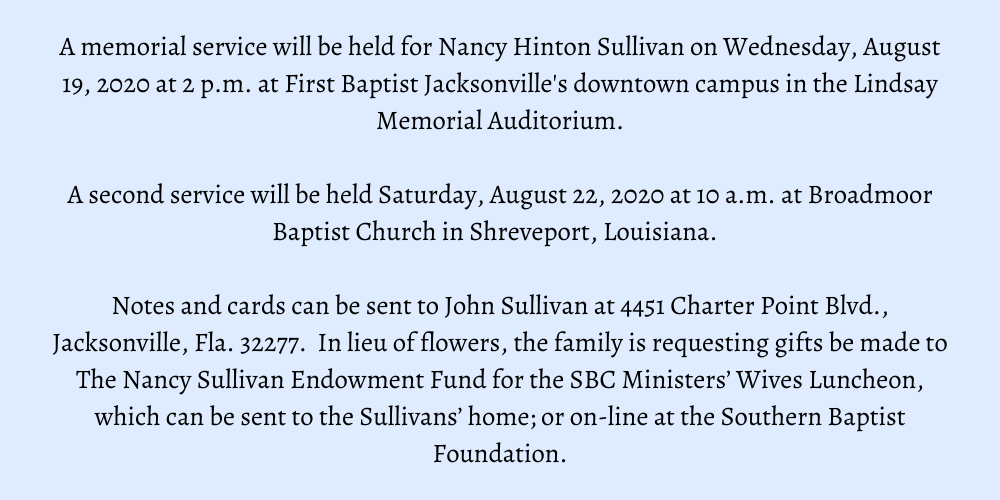 JACKSONVILLE—Nancy Hinson Sullivan, wife of John Sullivan, retired executive director-treasurer of the Florida Baptist Convention, died Aug. 12, 2020 at the Memorial Hospital in Jacksonville, Fla. The 83-year-old had suffered a heart attack in June and then a stroke a week prior to her death.

Nancy Sullivan was born with a twin sister Aug. 21, 1936 in Jonesboro, Ark. She met John Travis Sullivan in Washington, D.C. while they both worked for the Federal Bureau of Investigation. When they were dating, Nancy Sullivan took him to her Southern Baptist church and assumed he was a Christian. But her father discerned he was not and told her so.

They were married on June 24, 1955. Three months later, Nancy Sullivan presented the plan of salvation to her newlywed husband and led him to the Lord Aug. 13, 1955. He was baptized in Congress Heights Baptist Church in Washington, D.C., and was ordained to the gospel ministry on Dec. 1, 1957, by First Baptist Church, Cupertino, California.

According to close friend Susan Owens, of St. Augustine, “It was like they were one person. She traveled every mile he traveled. She has always been right there with him, encouraging him.”

“She was special. I will hold onto many memories. She was my mentor, friend, I loved her dearly,” Owens said.

Nancy Sullivan always defined her role as “John’s wife” ready to stand behind him. She had a burden for “hurting pastors’ wives” she would often say, “As a pastor’s wife for 32 years, I want to say that it can be great. We have great memories of every church we have ever served.” 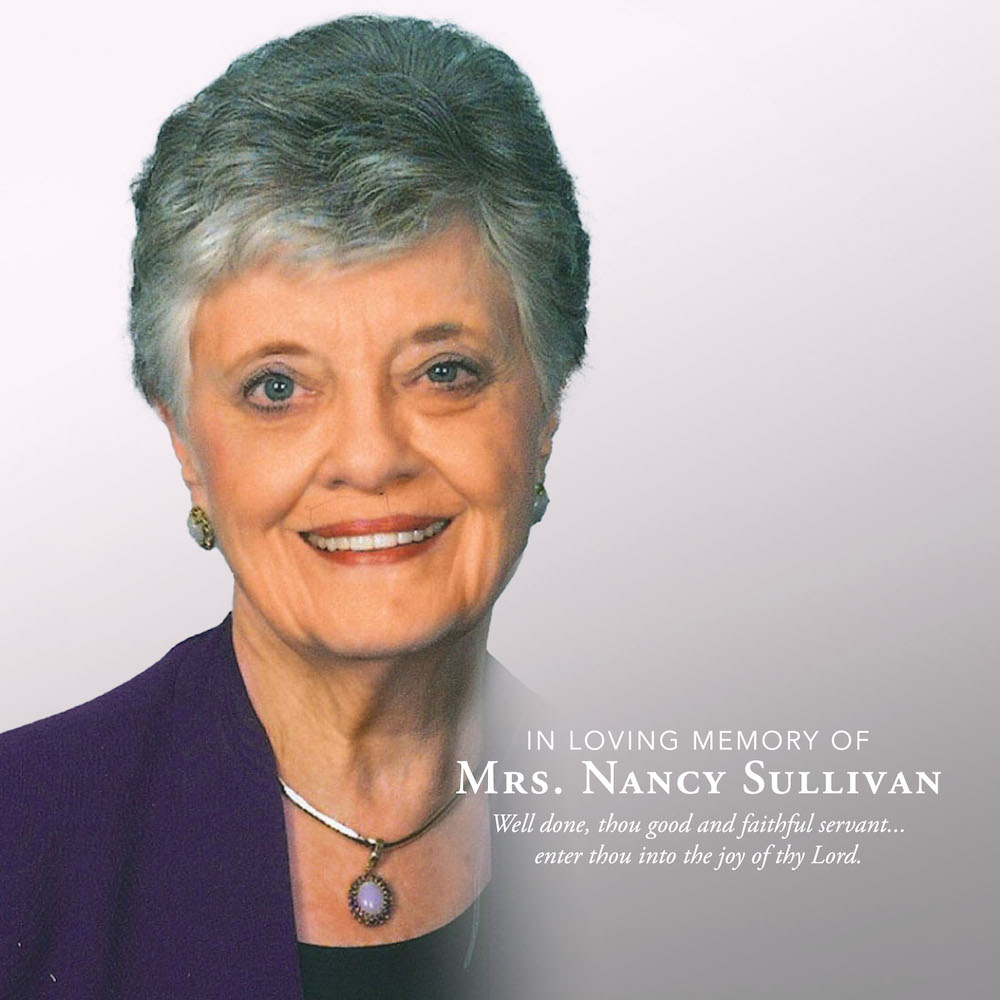 “Other than her family, Nancy loved ministers’ wives more than anything,” John Sullivan said.

In 1992, Nancy Sullivan served as president of the Southern Baptist Convention’s Ministers’ Wives Conference, a job that included planning and hosting the annual luncheon held during the SBC, as well as raising funds to underwrite the luncheon costs.

She was dismayed that many pastors’ wives could not afford to attend the luncheon and established the Ministers’ Wives Endowment Fund, approaching friends, acquaintances, churches, state conventions and SBC agencies for contributions. Recently the name of the fund was renamed “The Nancy Sullivan Endowment Fund” for the SBC Ministers’ Wives Luncheon in honor of her efforts.

“There was no one like Nancy Sullivan. Her heart was extraordinary,” said Susie Hawkins, wife of the GuideStone Financial Resources President O.S. Hawkins. “Her encouragement and vision with ministers’ wives was the driving force to establish an endowment fund to lower prices so that every wife could enjoy the luncheon. She worked tirelessly for years,” she added.

“No one is indispensable to the Kingdom of God, but some are irreplaceable and that was Nancy Sullivan,” Hawkins said.

Rhonda Kelley, wife of New Orleans Theological Seminary Emeritus President and adjunct professor of women’s ministries, said Nancy Sullivan was a “long time dear friend. I will always be grateful for her personally investing in my life as a young minister’s wife.”

“One of her great contributions to the Kingdom of God and Southern Baptists was her commitment to ministers’ wives. We will ever be grateful for the endowment she established to secure funds for the ministers’ wives luncheon,” Kelley said.

“May we all live godly and faithful lives as she did.”

She is survived by her husband, and their three grown children: son John Michael Sullivan of Stuttgart, Ark., and his wife, Jennifer; and daughters Cheryl Ann Anderson Allen and her husband, William, “Sonny” of Nashville, Tenn. and Jeanie Wendt and her husband, Sam, of Fayetteville, Ark. She had five grandchildren and six great grandchildren.

She was a member of First Baptist Church in Jacksonville where he serves as senior adults pastor.

Notes and cards can be sent to John Sullivan at 4451 Charter Point Blvd., Jacksonville, Fla. 32277. In lieu of flowers, the family is requesting gifts be made to The Nancy Sullivan Endowment Fund for the SBC Ministers’ Wives Luncheon, which can be sent to their home; or on-line at the Southern Baptist Foundation.