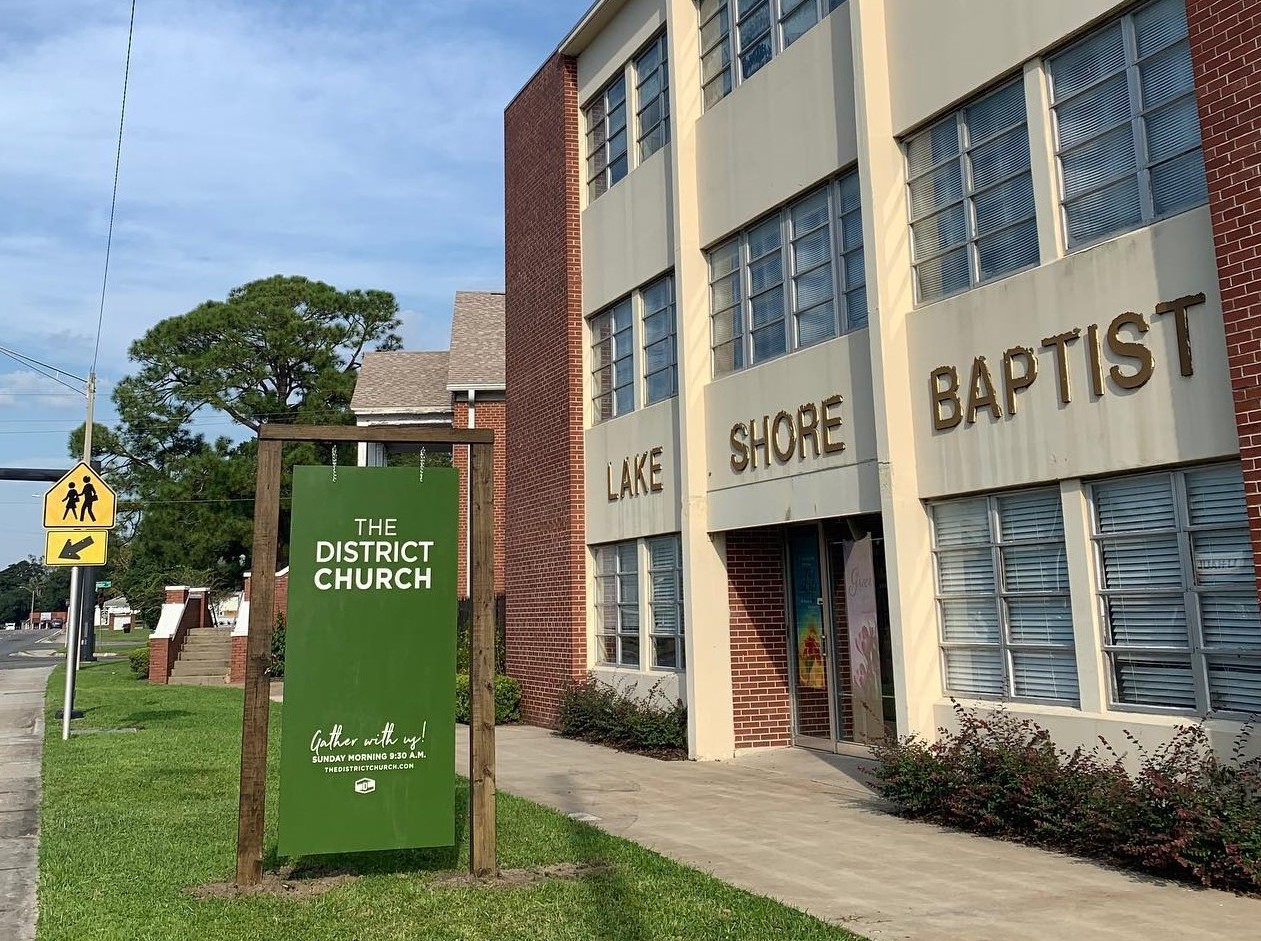 On Sunday, Oct. 18, the two churches launched a Kingdom partnership between the two diverse congregations to jointly share Lake Shore’s buildings and facilities, setting an example of good stewardship of God’s resources.

Since The District Church’s launch in 2013 “we have been looking for a building,” said church planter and lead pastor Boyd Bettis.  For the first two years the church met in an office building, and for then for the next five years rented space in a local high school in the city’s Riverside neighborhood, southwest of downtown Jacksonville.

As the church began planning to resume public worship after the COVID quarantine, church leaders learned the school had doubled their rental price. Now, District members were a congregation in need of a place to call home.

Hearing of their predicament, Bob Bumgarner, lead missional strategist of the Jacksonville Baptist Association, initiated a discussion with Paul Steinbach, pastor of Lake Shore Church, a historic church known for ministering to the diverse community in its changing neighborhood.

In August, the two pastors and leaders from their churches met with Bumgarner.

“My heart was stirred, I felt like maybe this is something God wants us to do to help The District find a place to meet. We have the facilities, why not let them use it?” said the Lake Shore pastor.

During that meeting Bettis shared they not only needed a place to worship but also had a desire to reach older adults. To Lake Shore leaders, that “sounds like a match made in heaven,” to the congregation of predominantly composed of older members, and The District Church, mostly younger families.

Over the course of several meetings, Bumgarner helped guide the conversation that led to establishing a cooperating partnership between the two churches.

Craig Culbreth, catalyst for Florida Baptist Convention’s east region, helped secure a grant to upgrade the landscaping of the Lake Shore property, remodel part of the children’s area and lay new carpet that would make the facilities more attractive to the young families with children.

The partnership was launched last month with The District Church worshipping at 9:30 a.m., while simultaneously providing children’s Sunday School classes, nursery through grade 5 for both congregations; and Lake Shore holding their worship celebration at 11 a.m.

“Lake Shore has been really good with the changes – they are great at hosting and accommodating us, pretty kingdom-minded,” shared Bettis.

“When we thank their members,” he continued, “many have responded how excited they are to have us share their building, and that they’re so happy to see children again.  One lady said that she had been praying for 10 years that they would see their building full of kids again. She believes The District Church is the answer to that prayer.”

The kingdom-minded Lake Shore Church also shares their facilities with a Russian/Ukrainian congregation.

According to Steinbach, the partnership with The District Church has been a “very positive work in progress.”

“You may not think it can work, it can, but you have to work at the transition; it takes much prayer, some compromises, working together,” said Steinbach.  “Also, it takes humility on both sides.”

“Don’t limit God,” he added. “If He presents something like this, go with it, see what happens, let God have free reign.”

In the coming year, the two churches intend to sponsor joint community outreach ministries, which began with a Trunk or Treat event in October. They have planned a combined worship night in November.

“You can’t win this world by yourself, not just one church in your area,” observed Steinbach, “you must have partnerships with others. If you let God work, together you can make an impact. I wasn’t expecting another church to come and share our facilities and reach younger folks. God decided this is what He wants, that’s pretty cool.”

Bettis noted, “We need more kingdom-minded partnerships.  We have churches that are dying or buildings sitting empty –sacrificially built by saints before us. We need to think about what’s best for the kingdom and have conversations about allowing growing, thriving congregations to rent those buildings, partner together, or merge.  It’s a matter of stewardship.”

Steinbach believes that being kingdom-minded starts with the pastor. “He’s the leader that must set the tone.  If you don’t want to work with other churches, it’s not going to happen, it must start with the pastor.”