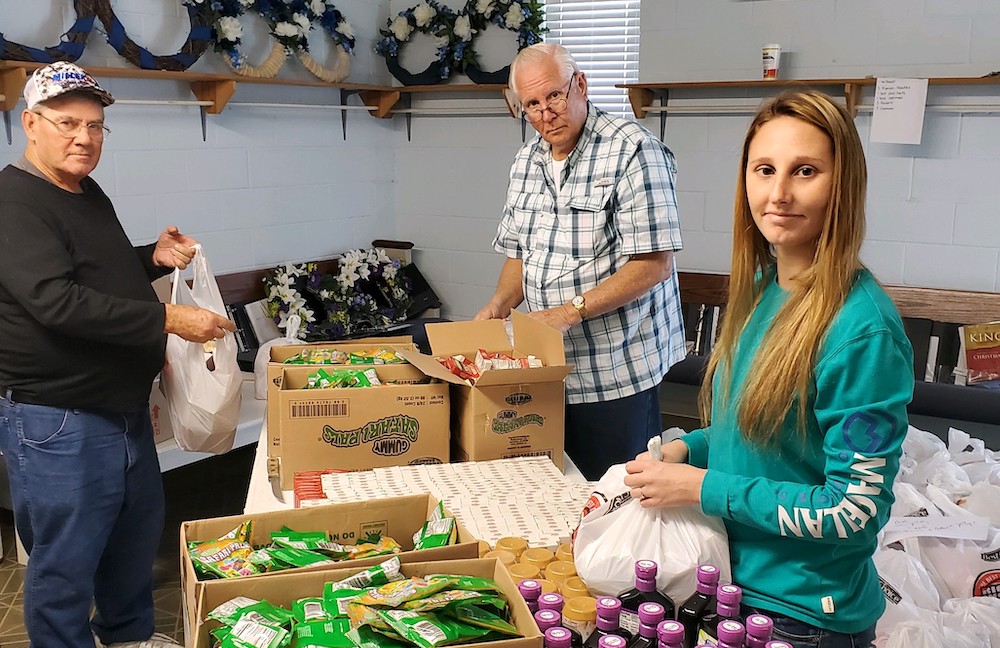 Pictured Above: Volunteers from Westside Baptist helped pack bags so that children from Wewahitchka Elementary School would have something to eat over Fall Break.

WEWAHITCHKA—When Pastor Derrick Gerber delivered backpacks filled with food to children at a local elementary school over fall break, “One child mentioned that they had just used up their food stamps and didn’t know where they would get any food to eat.”

The pastor and congregation of Westside Baptist Church in Wewahitchka had packed and delivered 120 bags to the school to make sure the students did not go hungry over Thanksgiving break.

They plan to do the same over winter break.

From the reports of the teachers, the children who received the food were extremely grateful, Gerber reported.

Westside, located east of Panama City, realizes the impact that filling empty stomachs can have in the name of Jesus.

“The reason for this is that we want the children to be able to focus on learning while at school instead of wondering where their next meal will come from,” said Gerber. “Our church has made a commitment to reaching our community and food distribution is one vehicle that we use.”

Since the outbreak of COVID-19, hunger has become a real and very tangible problem for many more millions of people in the U.S.

Closer to home, the Florida Department of Agriculture and Consumer Services project the food insecurity rate in Florida will rise as high as 19 percent in 2020 due to pandemic-related economic issues.

As unemployment from temporary shutdowns came into play, so did an increase need for food.

Just like Westside, many of the Florida Baptist Convention’s churches have recognized that need and stepped up to meet it.

For Panama City’s First Baptist Church of Bayou George, ministering to the hungry began with 100 pizzas and a desire to make Christ’s name known in an uncertain time.

In April, as the threat of COVID-19 loomed, the church decided to hand out pizzas to a community who needed something to look forward to. As neighbors drove up to the church for the free pizzas, they received information about the church and prayers from the church members.

“It went better than you can imagine, said Pastor Jay Powell.  “We gave away all the pizzas, people had a happy moment when the world was saying that is not allowed, and Christ’s church was a light.”

A food ministry had been something on Pastor Powell’s heart and mind for a while.

“After the pizza giveaway, we were excited, but really did not know where food would come from in order for us to keep serving people. We decided to pray about it and see what God wanted us to do,” Powell said.

The next Monday, they received their answer to prayer.

Troy Varnum, director of missions for the Northwest Coast Baptist Association, hosted a Zoom call with the association’s pastors to tell the pastors the State of Florida was partnering with the Florida Baptist Convention to get food to those in need.

The Bayou George church made their first pick-up of food pallets that week and distributed it to their community. The food was supplied throughout the summer months.

A snowball effect of opportunities to feed to the hungry kept rolling in for church. “A Hand Up” ministry in Panama City began donating food for the church to distribute. Then, a local grocery store began giving leftover bakery items each Wednesday and yet another contact was willing to donate loaves of bread and buns weekly. A philanthropist from Panama City Beach with no affiliation to the church heard about their efforts and donated $5,000 to ensure the ministry continued.

Then, a school resource officer at a local elementary school reached out to the church and mentioned the need of some children at the school who did not have food to eat on the weekends. Because of the opportunities that have presented themselves, First Bayou George is able to feed 38-49 students each weekend.

And just in time for Thanksgiving, the Florida convention, through the efforts of Jeffery Singletary, catalyst for the central region, arranged for a refrigerated truck to bring fresh food a week before the holiday.

That day, Lewis Miller, catalyst for the west region served alongside the church. They gave away 1,296 boxes of food to meet an enormous need in the community.

“Life-long Bayou George folks say this had to be the largest one-day charitable act to ever come to our community,” Powell added.

Since the start of their food distribution, Powell has noticed some new faces around their church, but the impact for The Kingdom may never be fully known.

“All of us pastors are trying to get people into service for His Kingdom, I guess sometimes if you will just buy some pizzas and pray, God will move on hearts and take care of the rest.”

As of Dec. 11,, nearly 700 Florida Baptist churches have delivered sustenance, hope and love while distributing 8,242,015 meals valued at $31,684,027 to communities facing hunger, unemployment and health issues during the COVID-19 pandemic.

As a result, these churches have reported 1,055 professions of faith in Jesus Christ, according to Myles Dowdy, missions and ministries lead catalyst for the Florida Baptist Convention, which spearheaded the massive relief effort across the state. The food distributions will continue throughout the remainder of the year.