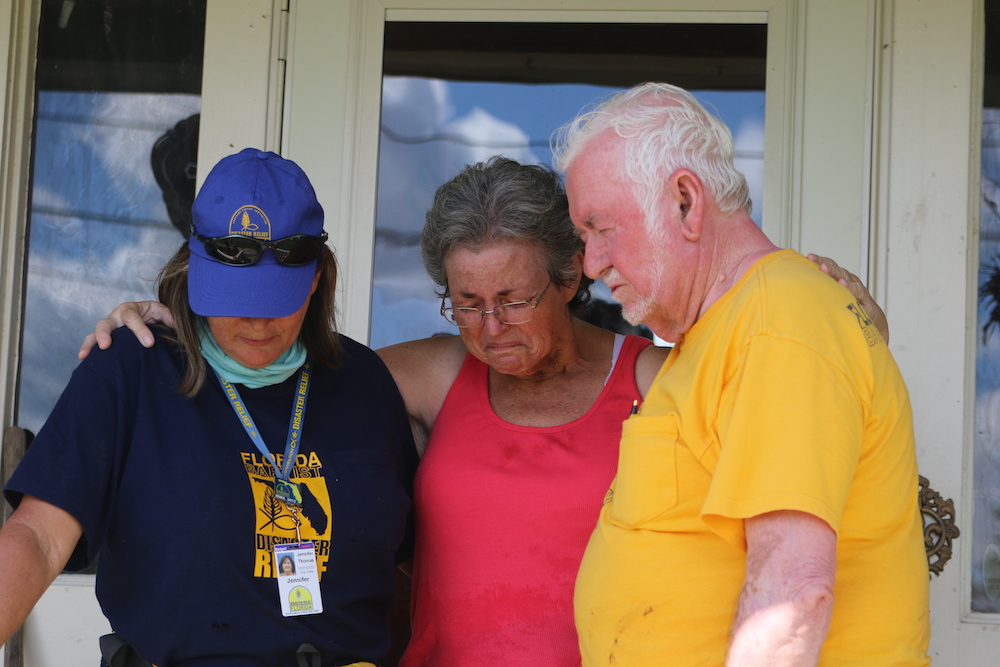 Pictured Above: Jennifer Thomas (left) and Leroy Beale (right), DR volunteers from Trinity Baptist Church in Apopka, pray with homeowner Brenda, a Hurricane Laura victim in Lake Charles, Louisiana. Grateful for the service provided by DR volunteers, Brenda said, “I hope to be well enough one day to serve.” Photo by Susan Stevens/ Courtesy of Association of State Baptist Publications

Weeks had remained in her home when the Aug. 27 hurricane uprooted the tree in her backyard and slammed it onto her roof above the dining room. Saying she could not bear to look at her damaged dining room, every day since the storm she sat on her front porch instead.

Hartley and a team of Southern Baptist Disaster Relief volunteers, including his group from Christ Fellowship of Tampa, got to work Sept. 17, undoing as much of the storm’s damage to Week’s home as they could.

As Weeks looked around at yellow-shirted volunteers who had come to help her, she said it was like the Lord sent her angels.

“It’s just such a relief to know that I was thought of; that I wasn’t forgotten,” Weeks told the volunteers.

As she watched the disaster relief workers, their activity reminded her of a time from her childhood when a hurricane flooded her family’s home, and her father had to carry her and her siblings through the water one-by-one to the safety of the nearby church.

Florida volunteer Hartley said helping people like Weeks makes the physical exhaustion of the trip worthwhile. The veteran of 16 international mission trips and countless disaster relief deployments said, “This is the type of thing that really makes the trip memorable.”

Hartley turned 80 years old in April. He’s had a quadruple bypass and several stints placed to keep him alive, all so that he can keep helping people.

When the team had removed the oak tree from the home, and were preparing to leave, Hartley gave Weeks a Bible with personal scriptures marked by team members. While he prayed with her, she began crying. “I always cry when I’m happy,” she told the Tampa volunteer. When he gave her $100 someone had given him to share with someone in need, “She began to cry more,” he said.

Hurricane Laura ripped through large swaths of Louisiana and Texas on Aug. 27 with winds of up to 150 mph, putting it among the strongest systems on record in the U.S. The storm’s heartbreaking path of devastation uprooted century old trees and destroyed homes. Entire neighborhoods were ripped apart by the powerful storm winds.

“A total of 87 volunteers assisted in Louisiana. Others were scheduled to go, until we started preparing for Hurricane Sally in Florida,” said Gregory.

Jennifer Thomas and Leroy Beale, volunteers from Trinity, prayed with homeowner Brenda, a hurricane survivor in Lake Charles, and shared an encouraging word. Grateful for the service provided by DR volunteers, the homeowner said, “I hope to be well enough one day to serve.”

“This is our calling from God,” said Beale. We don’t do it for the accolades, but because it’s what we’ve been called to do.”

“During these trips there are one or two moments that make you feel like ‘okay this is why God wants me here’,” said Thomas. “But in this trip, every day was filled with multiple of those moments. There was so much destruction, and the people were just so grateful for our help.”

Some expressed their gratitude through food, like a couple that brought them individually packaged meals when the volunteer team was stranded after a trailer wheel blew out. And others offered up songs about weathering the storms together.

Southern Baptist volunteers from multiple states joined forces with Florida Baptists in the anticipated long-term relief effort in Louisiana. From the roar of the chainsaw to the aroma of food being prepared to the sight of yellow T-shirts and hats, Louisiana residents are experiencing God’s love through the selfless actions of Florida’s DR volunteers.

With reporting by Maggie Evans, Association of State Baptist Publications