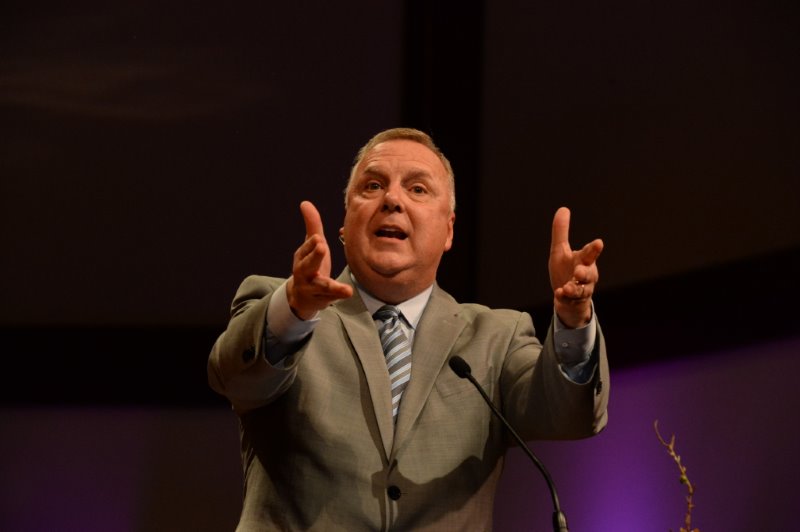 In his first address as the executive director-treasurer of the Florida Baptist Convention, J. Thomas Green asked if the state convention could “sit at the table” with Florida Baptists to redeem the time because the days are evil.

Citing Ephesian 5:16, Green urged those attending the Florida Baptist State Convention, Nov. 9 in Panama City, “to take the gospel into the world filled with evil, because Satan came to steal, kill and destroy.”

He recalled the death of Tripp Battle, pastor of Bayshore Baptist Church in Bradenton, who was killed “by evil” on the grounds of his church less than 30 days after Florida Baptists gathered during the 2014 Florida Baptist State Convention meeting in Lakeland.

The reality, he said, is that the spiritually lost are “one breath away from eternity without Jesus Christ.”

The message was presented prior to a key vote by messengers on the 2016 Cooperative Program budget that earmarked 51 percent to the Southern Baptist Convention while retaining 49 percent for missions and ministries in the state—a significant shift from the 2015 budget that sent 41 to the SBC and kept 59 percent in state.

The new budget is a strategy which will build bridges to ministry and fulfill a call to evangelism, prayer, discipleship and ministry, he said.

Saying his heart breaks knowing that the number of Southern Baptist missionaries serving across the globe has dropped from 5,600 several years ago, to an expected 4,200, Green said the 2016 budget is the “starting point” of sending more Cooperative Program to support global missions.

“The sacrifice is not in our funding decision; the sacrifice is with our missionaries that we have the joy and privilege to support who are called and committed to take the gospel of Jesus Christ to the nations,” he said.

“Let’s not think we are being heroic in our action but with repentance, humility, compassion, generosity, and joy release our resources to the honor and glory of our Crucified Savior,” he said. “There is too much at stake in our world. Now is the time to step up in a big way for the Lord Jesus Christ.”

Green allowed that the 2016 Budget is only the beginning of Florida Baptists’ commitment to the Cooperative Program.

“In my heart, I am committed to continue to widen the gap as Cooperative Program monies increase. I am praying for the day when Florida Baptists will send 60 percent of Cooperative Program resources forward and effectively do our statewide ministry with 40 percent.”

Green stipulated that the Convention will no longer “guilt” Florida’s 3,000 churches into giving more noting that the state conventions are the “gatekeepers” and “key to change.”

“Can you imagine what this amount would be if multiplied over the state conventions of the Southern Baptist Convention?” he asked.

He called Florida Baptists to join him at the table, before the altar. “This is a place for all churches regardless of size; a place for all pastors and for all laymen; a place where God will bind us together for the glorious sake of the propagation of the Gospel of Jesus Christ,” he said.

“Come to the table. Pray that our churches will be on fire and sinners are saved.”