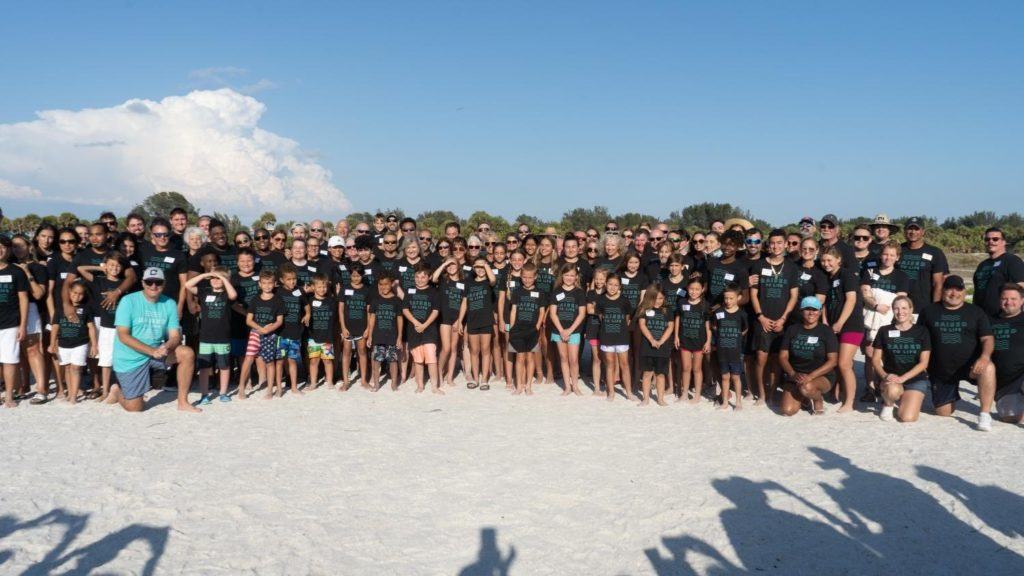 CLEARWATER, Fla. (BP) – A public baptism including more than 130 changed lives is significant on its own. But an onlooker’s response may be the biggest memory for Matt Laughter, worship pastor for the East Lake campus of Calvary Church.

A heavily tattooed father of three approached Laughter during the morning setup May 15 at Sand Key Park for Calvary Church’s biannual beach baptism.

“He asked if we needed any help setting up, but we had it under control and he walked off with his family,” Laughter said.

The event has been taking place for at least a decade, Calvary Church pastor Willy Rice said. Since 2012, Calvary has recorded 2,882 baptisms, according to Annual Church Profile reports.

“Our normal rhythm is twice a year,” he said. “The May one is always a response to the build-up to Easter and then intentional evangelistic efforts afterwards.”

All four campuses of Calvary were represented, with some individuals joining in person who typically worship with the church online. Candidates ranged in age and background for the baptism event, one of church’s largest ever, said Executive Pastor David Rice.

“It was an accurate depiction of how the Lord continues to allow Calvary to enjoy a fruitful harvest in our community,” he said.

There is at least one example of Calvary’s digital outreach becoming in-person community, as a member participating online from Minnesota last year traveled to Clearwater to be in the baptism service. She has since moved to the area and is a regular attendee at Calvary’s Clearwater campus.

As Sunday’s event was wrapping up, a little girl approached Laughter with a handful of seashells. She was a daughter of the man from earlier, who Laughter later learned is named Mike.

“She so sweetly approached me with [the] gift [of seashells] and wanted me to have them,” he said. “I got down on her level, looked her in the eye and began to tell her how thankful I was to receive them. Unbeknownst to me, this began to tear down the hard exterior of Mike.”

Mike and his family began walking toward the ocean to fish, but had forgotten their fishing poles. Laughter volunteered to carry the poles and during the walk asked Mike about his story.

That story centered around Mike’s parents, charismatic pastors who loved Jesus. When Mike was in the sixth grade, however, his mother developed a tumor on the back of her neck. She died, and from that point he had questioned everything he had seen and heard about God. Specifically, it troubled Mike that God could allow an evil to exist that would take his mother.

A slew of bad decisions into adulthood placed Mike in bad company, he told Laughter. “I have done the time for the things that I have done. However, I am an important man to the wrong people,” he said.

Laughter took it as an opportunity to share the availability of a different path.

“Your past nor your appearance scare me, Mike,” he said. “God told me to speak to you and tell you that He sees you! He loves you.”

Laughter shared the Gospel, and in the following moments, he said, “a hard man became a broken man. A lost man became found by the Father. He held me close as tears streamed down his face. He thanked me, held me and told me that he would never forget this moment.”

Laughter then removed the seashells from his pocket.

“Mike, these are meant for you!” he said. “Place these in your pocket to remind yourself about what God did for you today! Every time you doubt, let these shells be a reminder and an altar for you.”

God will provide a way out of any situation, Laughter told him.

“He will never leave you nor forsake you. He will walk through it with you,” he said. Laughter’s only request for Mike at that point was for him to return to his family and tell them what Jesus had just done, because he could become the vessel God used to lead his family to Jesus.

“We hugged. He cried. He looked at his shells, and he left for his family,” Laughter said. “He left a changed man and a new creation in Christ.”