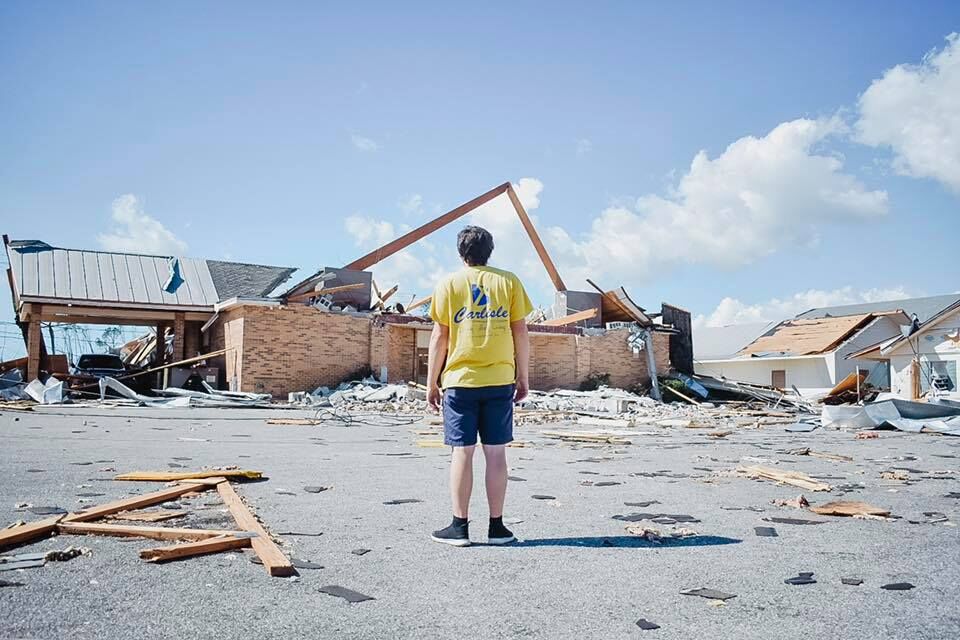 First in a series of three stories on the first anniversary of Hurricane Michael.

PANAMA CITY–Joshua Fidler walked across a field that had been covered for almost ten months by massive debris—“a void that used to be our sanctuary” when he saw a page that had been ripped from a Bible in the cleanup following the fury of Hurricane Michael on Oct. 10, 2018.

The pastor of Carlisle Baptist Church in Panama City picked up the scrap of paper and began reading God’s words from Leviticus 26:12, “I will walk among you and be your God, and you shall be My people.” 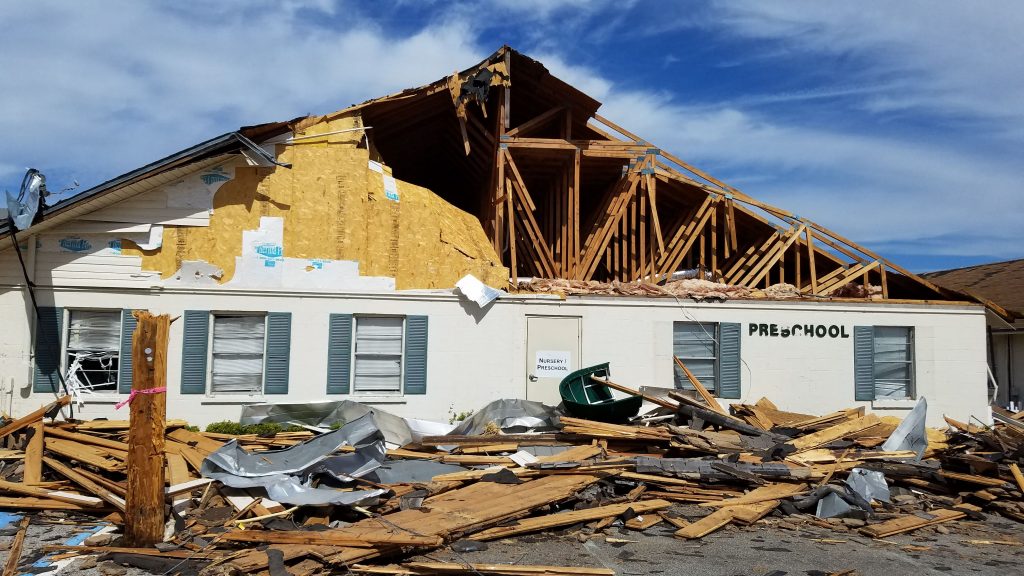 In the midst of the storm’s rage one year ago and the heartbreaking yet hopeful recovery efforts in the aftermath, he knew those words to be true. With the generous partnership of other Florida Baptist churches, including Chet’s Creek Church in Jacksonville, Carlisle Baptist Church had a future.

The Category 5 hurricane had destroyed four of Carlisle Baptist’s five buildings, but it did not break the church’s spirit. “Sometimes in life the things that seem like the biggest losses are the biggest opportunities. Sometimes we have to go into seasons of destruction to usher in a new day,” the pastor said.

“Oct. 10th wasn’t the end of history for Carlisle Baptist Church; it was just the beginning of His story,” Fidler said.

In Northwest Coast Baptist Association (NWCBA), 37 of the 48 Southern Baptist churches sustained damage or destruction as Hurricane Michael lashed Florida’s Panhandle, said Troy Varnum, NWCBA director of missions. Because of the churches’ collective determination to persevere in spite of the sometimes overwhelming challenges, Varnum said, “It is fitting to borrow Thom Rainer’s ‘scrappy church’ title to describe our churches.”

Varnum described “enormous support financially and in manpower” from Florida Baptist churches throughout the state as well as “an initial multi-month presence through disaster relief.” Some churches have responded to the devastation by helping with specific projects while others have established ongoing relationships with churches in the hurricane’s destructive path, he said. 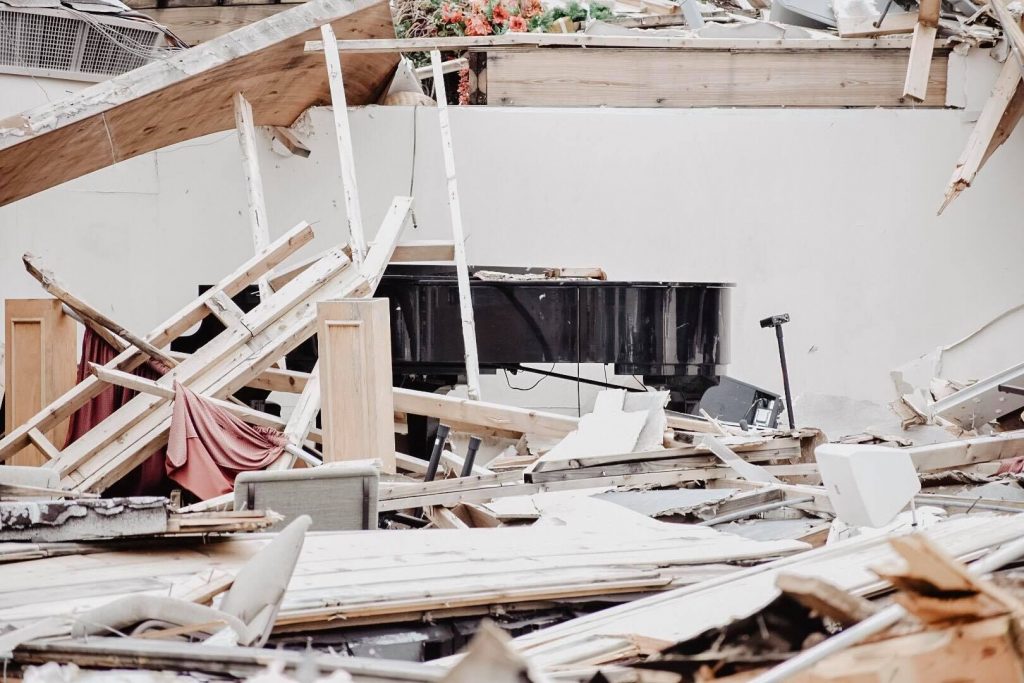 Through the Convention’s Churches Helping Churches, Florida Baptist churches from across the state established long-term partnerships with churches in the hurricane-impacted areas of the panhandle.

After the storm, 35 Florida Baptist churches were assigned by the state convention to walk in partnership with 33 of the storm damaged churches.

“We are family, and no matter the size of your church we can all do something,” said Spike Hogan, pastor at Chets Creek Church. “In helping others, it helps change the culture of your church when you challenge them to give.”

“The hand of God is seen in the relationships formed between churches across our state. When tragedy strikes, God’s church is there to stand together to restore and rebuild,” said Lewis Miller, Florida Baptists’ catalyst in the west region. 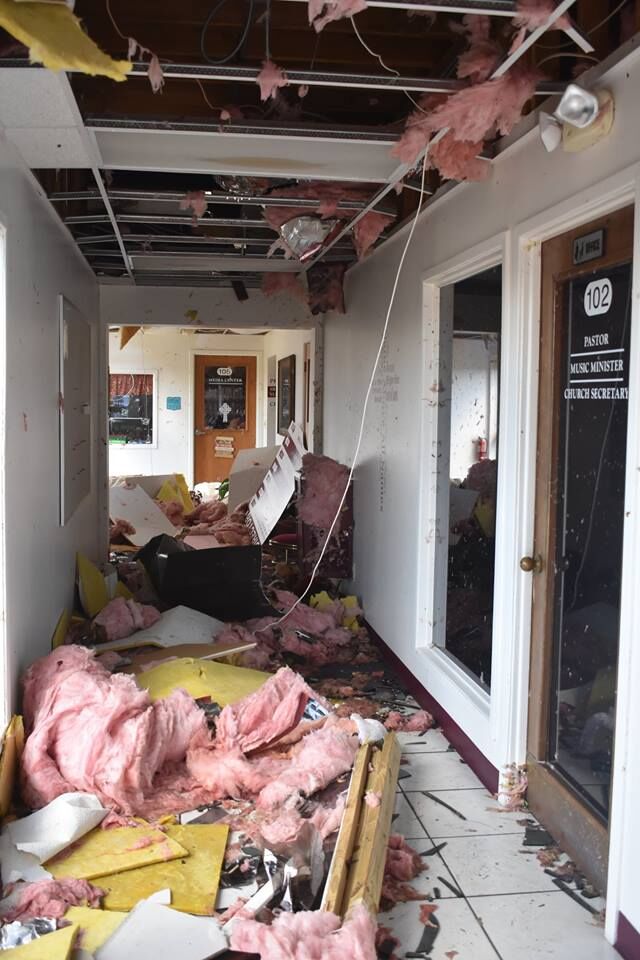 One church grateful for the partnership of Florida Baptists is Long Avenue Baptist Church in Port St. Joe, which sustained storm surge damage in all four of its buildings. For the past year the Long Avenue congregation has been meeting in the facility of another church in the community as the tear-down and rebuild of its own facility has been ongoing.

“As it stands, we are a month or so away from moving back into our space,” said Eli Prine, senior pastor of Long Avenue.

The church might not be as far along in the recovery process without Florida Baptists’ partnership, Prine said. First Baptist Church of Orange Park was assigned as a primary partner with the Port St. Joe church.

“Be it through coordinated effort or churches simply being the hands and feet of Christ, Florida Baptists have had a huge impact on the recovery process,” Prine said.

“There were Florida Baptist churches here to partner with and help our church specifically within a week and a half of the storm hitting, bringing supplies, serving the community, and coming with work gloves in hand to begin the tear-down process so that we could begin putting things back together,” Prine said.

Florida Baptists’ response in the hurricane’s aftermath has not only helped churches recover physically but also allowed churches to continue in ministry to community residents reeling from the storm’s assault.

“Because of Florida Baptists, we did not have to stop any ministries. In fact, we enlarged them,” said Steve Taylor, senior pastor of Emerald Coast Fellowship in Lynn Haven. The church was partnered with First Baptist Church in Avon Park to help with the recovery process.

Although the Emerald Coast church facility sustained extensive damage, the church kept a focus on the community. “I have never seen the spiritual ground so fertile,” said Taylor. Since the storm, 40 people have been baptized at the church, with many other individuals expressing new or renewed faith in Jesus.

“Once the privacy fences came down, so did many of the obstacles that stood in the way of neighbor loving on neighbor. The power of our churches was seen in their ‘scatteredness’” explained Varnum.

Even as Fidler gazes over the void where Carlisle Baptist Church’s sanctuary once stood, he is grateful. “The Lord is a good, good Father. He has taken care of us. We are praying the motion the hurricane set into motion never stops.”