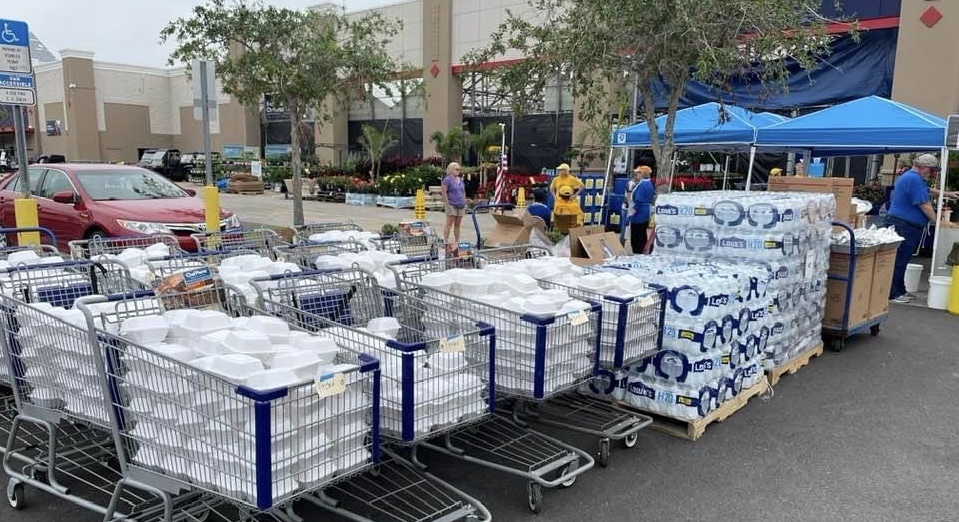 PORT CHARLOTTE­ -– Her husband had died just before Hurricane Ian made landfall in southwest Florida Sept. 28. As her first Thanksgiving without him approached, Marilyn* felt “so alone.” She welcomed the prayers of Florida Baptist Disaster Relief volunteers and gladly accepted the Thanksgiving meal they offered her.

Sam* was struggling with cancer, but he couldn’t help but think of others in need. He eagerly picked up several FLDR Thanksgiving meals and headed out to share them with homeless people he had passed by that morning on his way to Lowe’s.

Financially strapped and exhausted, Rebecca* was caring for her grandchildren while her daughter was in the hospital, ready to give birth. With a thankful heart, she was delighted when FLDR volunteers offered her free Thanksgiving meals to take to her family.

“Who would have ever thought that a Category 4 hurricane would open the door to such magnificent opportunities to minister in southwest Florida?” said Cynthia Logan, FLDR volunteer from Murdock Baptist Church in Port Charlotte.

“The hurricane coming here was the stepping stone to greater service.”

Although FLDR volunteers had worked tirelessly for almost two months since Hurricane Ian’s wrath was unleashed on southwest Florida, their ministry was not finished.

As the morning was dawning on Wednesday, Nov. 23, the day before Thanksgiving, FLDR volunteers arrived in a Lowe’s parking lot in Port Charlotte to begin hours of meal preparation before serving 1,000 Thanksgiving meals to their neighbors.

The opportunity for FLDR to serve Thanksgiving meals to Sunshine State residents impacted by Hurricane Ian was initiated by Florida’s State Emergency Operations Center, which had received the request from Lowe’s.

He immediately contacted North Carolina’s DR director, who also “accepted the opportunity” for his state’s DR volunteers to serve traditional Thanksgiving meals at the Lowe’s in Fort Myers while FLDR volunteers were serving simultaneously in Port Charlotte.

Serving the Thanksgiving meals to southwest Florida residents, Coggins said, “let them know that we still care about them. Just because things have moved on and are getting back to some semblance of normal, they are not forgotten. There are people who still care for them, and we want them to know that.”

Helping serve the Thanksgiving take-home meal in Port Charlotte, FLDR volunteer John Ciukaj, described “a high level of openness and gratitude from people. I had encounters that made a lasting impression on me.”

With “tears in their eyes,” many people who received Thanksgiving meals “shared with us that DR had come to their homes to help with great needs,” after Hurricane Ian’s landfall, Logan recalled.

‘It was a day when we gave meals for the body and food for the soul.’

Along with the meals, complete with pecan pie, FLDR volunteers shared prayers, Bibles, a word of hope and the gospel message.

“It was a day when we gave meals for the body and food for the soul,” Ciukaj said.

Gordon Caldwell, an FLDR chaplain from Murdock Baptist Church, added, “Jesus was glorified in many ways.”

Beyond the ‘shadow of the steeple’

Even during difficult experiences, such as a hurricane, Coggins said, “It is important to think about our blessings–not just material blessings– because it helps us keep things in perspective.”

While he doesn’t want “to minimize the loss” that people experience during disasters, Coggins hopes that FLDR volunteers can remind people that “life is so much more, and eternity is about much more than possessions. It is about our relationship with Christ. We as a relief ministry can help people to see those things.

“For those without Christ, it gives us an opportunity to open that conversation often about eternal things in relation to temporal things.

“For those who are followers of Christ, it gives us an opportunity to minister to them in their faith, help them find a new balance of the eternal and temporal and help them to fix their faith on the Lord and what He has given us in Christ.”

At Murdock Baptist Church, Pastor Ron Tipton often challenges his members to minister to their neighbors who live “in the shadow of the steeple,” and Logan said that ministering in Hurricane Ian’s aftermath has taken her pastor’s challenge even further.

“Hurricane Ian opened the door to sharing Jesus with people far beyond the ‘shadow of the steeple,’” she said.

*Names have been changed to ensure the privacy of those who shared their personal stories with Florida Baptist Disaster Relief volunteers.