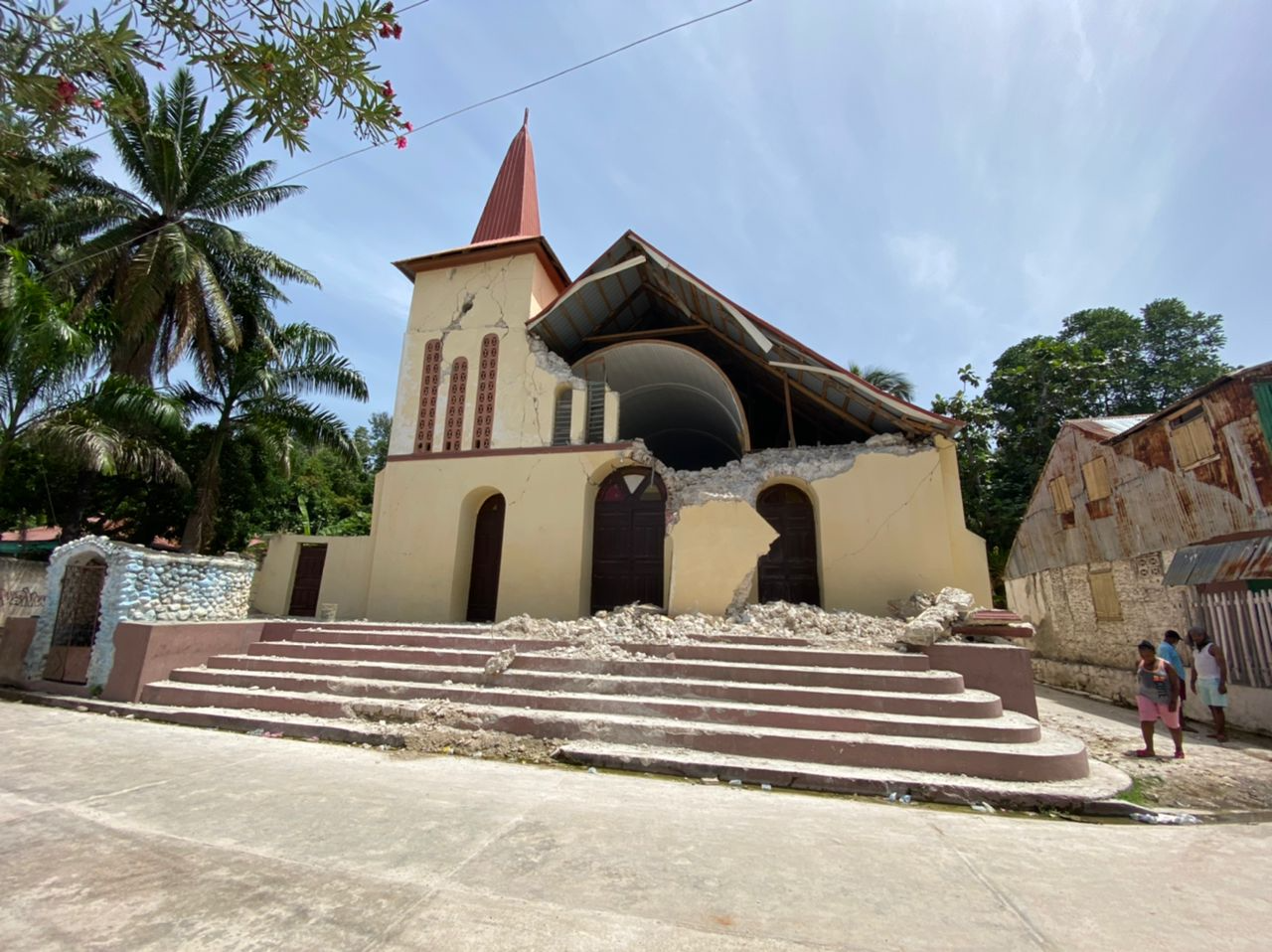 An Aug. 14 earthquake damaged or destroyed 56 Confraternité Missionnaire Baptiste d’Haïti churches, including those pictured here.  Photos supplied by Even Jules and John Voltaire.

JACKSONVILLE–Florida Baptists have launched a relief effort to help survivors and communities devastated when a magnitude 7.2 earthquake struck the Tiburon Peninsula in southern Haiti Aug. 14, killing as many as 2,200 Haitians and leaving multiple communities without shelter, food and water.

Already reeling from the earthquake, on Aug. 17 Haiti received another devastating blow as Tropical Storm Grace slammed into the island, causing more damage and massive flooding.

The Florida Baptist Convention has begun the process of sending more than 1,200 tarps to pastors and churches in the affected area near the large city of Les Cayes, about 150 miles west of capital city of Port-Au-Prince. The quake crumpled concrete block structures in the Grand’Anse, Nippes and Sud departments, destroying or damaging an estimated 130,000 houses and displacing 24,400 people.

The tarps were flown down to the Carribbean nation beginning Aug. 28 and will be distributed through Haitian pastors to families and churches in the affected communities. Multiple trips are required to carry the weighty cargo. Containers of food and necessities will be shipped in days ahead.

Florida Baptists have had a long-term, on-going partnership with churches in Haiti since the mid-1990s, having helped establish a thriving network of 2,000 churches affiliated with Confraternité Missionnaire Baptiste d’Haïti (CMBH). In the aftermath of the 2010 earthquake, Florida Baptist Disaster Relief volunteers marshalled a rebuilding effort that constructed 1,203 homes and 32 churches.

After this quake, the 350 churches in the Florida State Haitian Fellowship (FSHF)—led by Even Jules, FHBF president and pastor of Bethel Baptist Church in Del Ray Beach–will spearhead the relief effort, working directly with CMBH churches.

“Our Florida Baptist Haitian churches are divinely prepared and equipped to meet the unique challenges currently existing in Haiti,” said Myles Dowdy, Florida Baptists’ missions and ministries lead catalyst. “These are men who were born and raised in Haiti, know the country and can travel there safely.”

Immediately after the quake, the Convention provided financial gifts to 186 pastors in the damaged region. The funds were deposited directly into the pastor’s accounts for immediate assistance for their family and churches. The Haitian Fellowship are critical partners in ensuring these funds will be received immediately by the pastors who have been directly affected by the latest devastation, said Dowdy.

“From the first moments following the earthquake, it has been comforting to know that Cooperative Program resources were already responding to this heartbreaking crisis through the daily resources invested in our CMBH churches.”

Partners also include the Southern Baptist Convention’s Send Relief International; Missionary Flight International in Fort Pierce, which volunteered to fly the tarps to Port-Au-Prince; and Food for the Poor.

Shipping containers with more than 200,000 meals and water are expected to be shipped to Haiti, placed in each of the three departments and distributed by the CMBH pastors. Additional items will be collected across the state to be sent to the Caribbean nation, said John Voltaire, Florida Baptists’ Haitian church catalyst.

He noted that 56 CMBH churches have been damaged or destroyed and will receive tarps to continue holding worship and provide spiritual counseling for their community.

“The spiritual aspect of our operation is very important,” said Jules. “We are asking God to use this tragedy to win people to Him.”

The situation in Haiti is very fluid at this time, added Voltaire. No disaster relief teams are being sent at this time to the troubled nation due to existing dangerous conditions.

Nearly 75 percent of all Southern Baptist Haitian churches are in Florida, Voltaire said, “Our churches love Florida Baptists and the responsibility they are given means so much.”

Churches wishing to become involved in the response can make donations through the Florida Baptist Convention’s website at www.flbaptist.org/give.