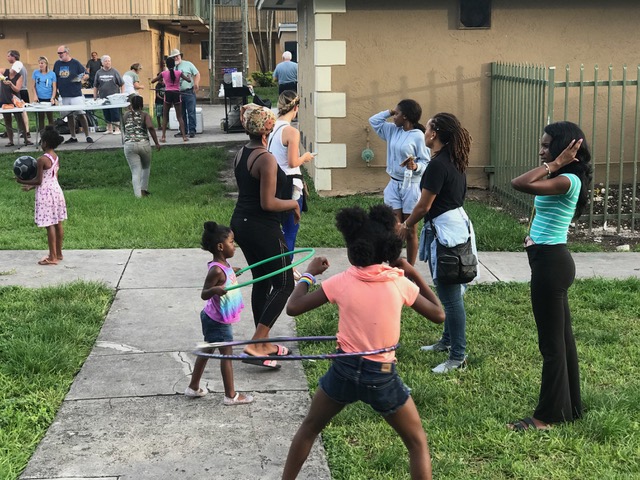 A team from Sopchoppy Southern Baptist Church traveled several hundred miles to spend some time working alongside The Movement Church in Homestead as part of the Send South Florida initiative.

“Send South Florida” is the theme of the Maguire State Mission Offering for the second year in a row as the Florida Baptist Convention and North American Mission Board have partnered together to draw new attention to the overwhelming spiritual needs in Miami-Dade, Broward and Palm Beach counties where more than a third of the state’s population lives.

David Allen, Sopchoppy’s pastor, said his church has been highly motivated to be involved in missions and a visit from James Peoples, North American Mission Board Send City Missionary, spurred them to partner with The Movement Church.

“We put out the list for those who wanted to form a mission team to go to South Florida and a total of 18 teens and adults put their names down,” said Allen.

The list, he added, filled up more quickly than he expected.

Corey Sanders, pastor of The Movement Church, said that the visit from the Sopchoppy missionaries was a blessing.

“They served us so well and helped us get out into the community and build relationships,” he said.

The team slept in the missionary dorms at the Southeast Regional Center in Hialeah and made their daily commute to Homestead to help with summer camp set up. Allen said they worked on everything from building tables and shelves to polishing floors and painting. But the most valuable thing they were able to do was interact with the community as members of The Movement and the Sopchoppy team treated the residents of Coral Gardens Apartments to a cookout, games and great conversations.

“Before the trip Corey and I talked a lot about the importance of building trust and relationships and the community meal was a way of doing that,” he said. “We realize he is working in a tough field.”

Sanders was thankful for the support the people of Sopchoppy provided.

“They helped pay for the meat and engaged with the kids, playing games with them and talking to the adults,” he said.

The partnership between these two churches will continue to grow as Allen looks forward to having Sanders come and preach at Sopchoppy Baptist in the future and continue to send teams back to Homestead and work together again on mission for the Gospel.

North Florida pastors connect with planters in the South