Campers On Mission (COM) is a national fellowship of evangelical Christian campers who look for opportunities to share their faith and love for Jesus Christ through their participation in mission activities while camping. COM was started by the SBC Home Mission Board (now NAMB) in the 1960s when camping became a very popular activity. Ministry has expanded way beyond the campground.

To learn more about Florida Campers On Mission, click here.

To learn more about National Campers On Mission, click here.

COM: A Great History, A Bright Future
As We Go…

By Marc and Sandy Johnston 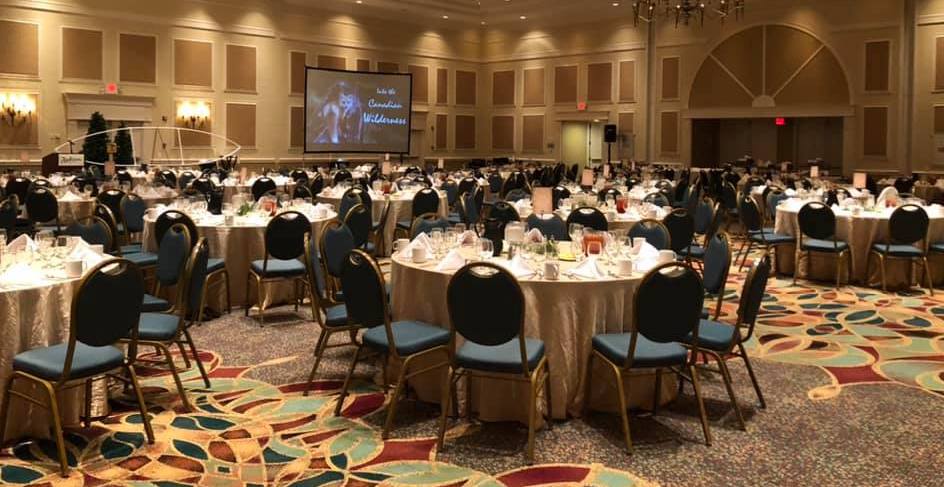 In February Marc and Sandy attended the 6th Annual Gala to benefit the Canaveral Port Ministry.  The room was filled with about 300 people including a group from the Port Authority and the Brevard County Commission.  Marc, representing the Florida Baptist Convention, was recognized as the major supporter along with the Brevard Baptist Association.  Statistics were shared for 2019: 49,000 plus seafarer visits to the Seafarer’s Center and 400 professions of faith.  Nearly 100 countries were represented in seafarer visits.  One speaker stated that the ministry started 20 years ago.  Marc whispered 23 years for he knew that Bill and Emily Richard, COMers, started the ministry in 1997. 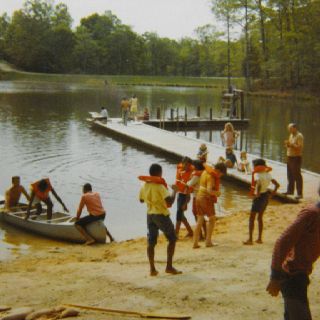 The original idea for the COM started in the early 60’s. Some of the charter members were working at Caraway Campground near Asheboro, NC. Russell Willis, an active COMer, camped at Caraway during the 60’s and remembers the campground as being one big field. By 1965 campsites were set up under the trees. Organized Family Camping Weekends at Caraway campground started in 1970. There were two weekends each in the spring and fall. These were sponsored by the Church Extension Department and the Brotherhood Department.

In 1971 the Sunday School & Home Mission Boards, led by Joel Land, did a study on RV’ing. He wrote articles for the Baptist newspapers of several states. The articles invited people with campers to an organizational meeting of the National Campers on Mission on May 19-21, 1972 in Kentucky. The stated objective of the national organizational meeting was “to bear witness to the saving power of Jesus Christ, to communicate through word and deed to the good life in Christ, and to be genuine and sensitive in our relations with other people.” The initial ministries were resort/campground ministries, lending a helping hand in setting up camp, doing day camps, backyard Bible Clubs, VBS, etc. (From National COM Manual) 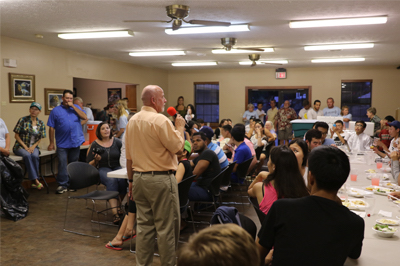 In 1979 Sandy was introduced to Campers on Mission families when she served as a Summer Missionary in the Smokey Mountain Resort Ministries. She was impressed by these families who took their summer vacations and turned them into mission trips, holding campfire services in the evenings and leading devotions through the week, being the hands and feet of Jesus to fellow campers.

In 1983 Marc was introduced to Campers on Mission during orientation as a US-2 Missionary.  He and Sandy were married in 1982 and had been appointed as US-2ers. They began recruiting campers to join COM as they helped them in the River Valley Resort Ministry in Arizona. Their first recruits were Newell and Ruth Epperson, who returned to their home in Georgia and became leaders in the Georgia State Chapter of COM. They were leaders in the National Rally that was held at Stone Mountain in 1988.

After Seminary, Marc and Sandy came to Florida as Church Planters, jointly funded by the old Home Mission Board to also lead in Resort Ministry in the Orange Blossom Baptist Association. Their Avon Park neighbors just happened to be Margaret and Forrest Johnson, very active Florida COMers. Margaret and Forrest invited them to the COM rallies and Strawberry Festival Ministry. COMers were very active in helping in the Church Plants and local special event ministries.  Bill and Helen Sanders came to help begin a ministry to the 12 Hours of Sebring Race.

In 1994, Marc and Sandy were called to be the National Resort Missionaries in Orlando. Over the 12 years they served in Orlando, COM was right beside them.  The Central Florida Fair Ministry, the Kissimmee Valley Livestock Show & Fair Ministry, and a Living Nativity Ministry on International Drive were annual events that were staffed by Campers on Mission. The local Campers on Mission were always available to help when the need arose in special events and annual ministries of the Greater Orlando Resort Ministry.

In 2006, Marc became the Community Ministries Catalyst for the Florida Baptist Convention. He was asked if he would be willing to be the representative to Campers on Mission.  Marc gladly accepted the responsibility.  He enjoys being able to support the Florida Campers on Mission by being their liaison with the State.  He and Sandy enjoy attending the rallies when they can and fellowshipping with COMers who have become like family to them. 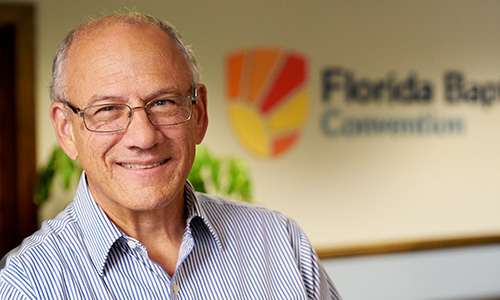 Why We Value COM?

COMers have invested in our ministry heavily through the years.  During our years in OBBA, the Johnsons and Sanders spent a lot of time assisting us.  During our days serving through GOBA many COMers served with us: the Van Scoters, the Edfeldts, the Pinsons, the Hosfords, the Berndoblers, the Witkos, the Derricks, Bobbi Worden, the Austins and Chuck and Betty Harris.  Many others that I can’t recall their names.

But the main reason we value COM is Wendy.  We do not remember her last name.  We do not know what became of her.  We do remember God transforming her life.

In 1996, we were set up at the Central Florida Fair ministering to the Carnies.  COMers served as our volunteers.  A 30- year old woman came into our encampment for coffee and home-made cookies.  She had a black eye and Martha Edfeldt, one of the COMers, had to know the story.  When she asked, the woman told her that she had been beaten up by another woman.  That woman was Wendy and she was coming into our encampment.  The woman with the black eye excused herself and went out another way to avoid Wendy.  Wendy was a modern-day Samaritan woman right out of John 4.  She was rough and tough on the outside but hurting greatly on the inside.  Over the next several days Marc watched two COMers, Martha Edfeldt and Gail VanScoter, love on her without judging or condemning.  By the end of the week, Wendy came to Christ and instantly her life was transformed!  The visible difference in her life made it possible for Wendy to introduce the beaten-up woman to Christ!  The last time Marc saw Wendy, she was reading her Bible to a fellow Carnie!

COMers care about the forgotten of society, the social outcasts, and the downtrodden.  They are willing to do whatever it takes to get the job done and share the love of Jesus. There is something about camping that puts everyone on an even plane, taking down walls and opening doors of communication that just can’t be done in any other setting. COMers understand this and have embraced the possibilities of ministering …. As We Go! 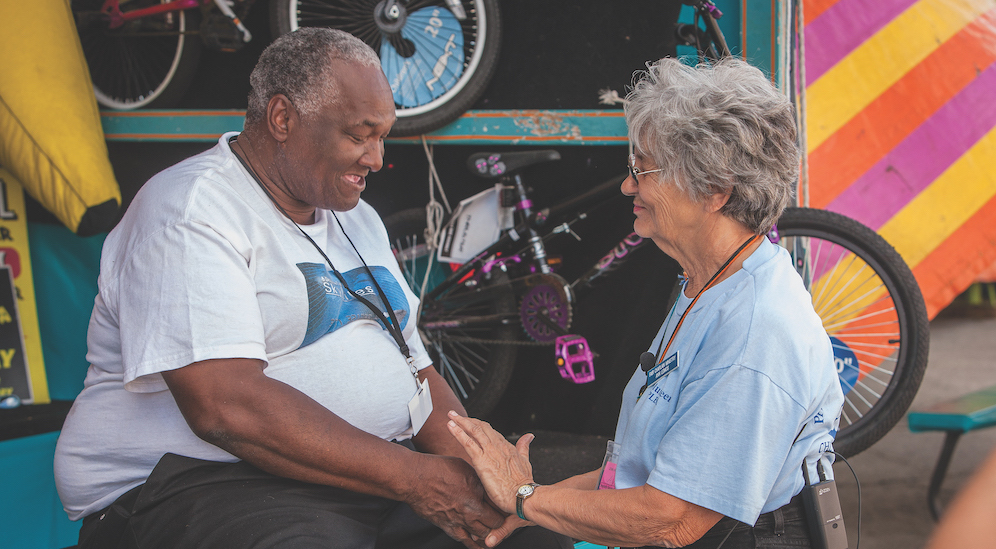