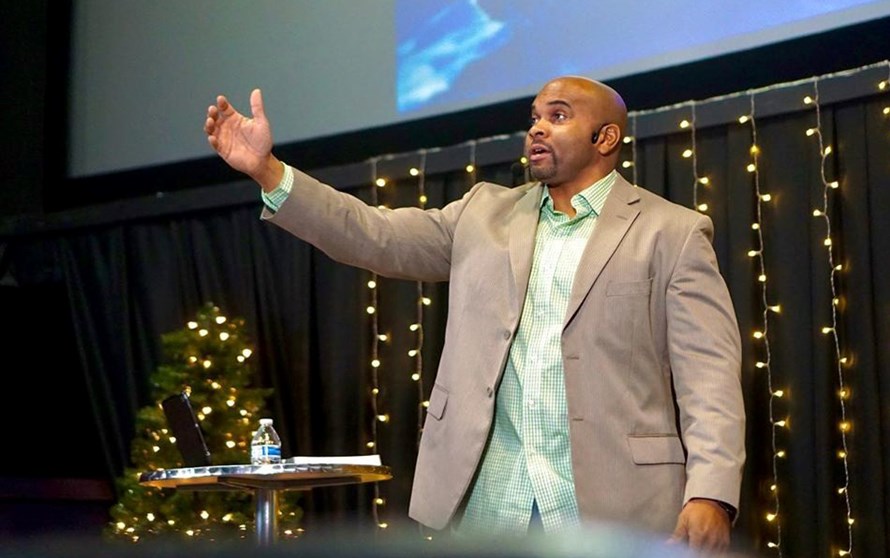 MIAMI (BP) –Daryl Jones knows what it’s like to get ready for Sundays. As a wide receiver in the NFL in the early 2000s, he played four seasons for the New York Giants, Chicago Bears and Minnesota Vikings.

But this Sunday, as the eyes of the world turn toward America’s biggest football game, Jones is getting ready for an even bigger Sunday. Less than 20 minutes away from Hard Rock Stadium, the site of Super Bowl LIV, Jones will preach the Gospel at The Rock Fellowship Church, a church he planted in Miami in 2016.

The Send Network and Florida Baptist church planting missionary said his experience as an NFL player and a wide receiver for the 2001 national champion Miami Hurricanes has helped him get the new church off the ground.

“When you play Division I college football, are part of a national championship team and play in the NFL, a part of your wiring is that you’re crazy,” Jones said. “We think we can do some crazy stuff. We have a challenge. We can run through the wall, and we’re going to be OK. I don’t want to use the word ambition, but we were not afraid of risk. We’re not afraid to step outside of our comfort zone because we know that is where we’ll really grow.”

Jones is part of a growing brotherhood of Send Network church planting missionaries who are engaging the community hosting the upcoming Super Bowl with the Gospel. North American Mission Board (NAMB) research indicates that 78.8 percent of the South Florida area is in need of the Gospel.

The Send Network, NAMB’s church planting ministry, has 43 church planters working to reach the counties of Miami-Dade, Broward and Palm Beach that surround the city of Miami.

James Peoples, the director of Send Network Florida, noted that the state is growing quickly, and a third of its 21 million residents live in South Florida.

“We need more churches. We need revitalization and healthy churches, but we need to plant new churches as well,” Peoples said.

Tim Wolfe, who began his role as the Send City missionary for South Florida earlier this month, said as he has traveled the area, the level of spiritual need he has seen has underscored the need for new church starts.

“It makes you weep, just thinking about the desperate need for people to hear about Jesus,” Wolfe said. “We believe everything is about the Gospel.”

The diversity of the northwest Miami area where The Rock Fellowship Church is located makes it an ideal fit for Jones and his family. Jones is an African American from Dallas, and his wife is Chinese-Jamaican.

The church looks like the surrounding community. People from around 10 different national origins call the church home. About 30 percent of the church is Hispanic, even though Jones doesn’t speak Spanish.

“One of the messages our church gets from me is that we need to be on mission,” Jones said. “I want every one of our members to see that God can use them. As disciples, we make disciples. It’s not just a pastor’s job to share his faith. It’s everyone’s job.”

Besides training and encouraging its members to share their faith, the church reaches out to the community in several ways, including door-to-door evangelism and service evangelism projects.

Sunday before the big game, Jones’ church will host the Professional Football Players Mothers Association in their morning service, and those in attendance will be wearing jerseys for their favorite teams.

Jonathan Palaci, who planted Christ Family Church in the center of Miami to engage English-speaking Hispanics, started a counseling center in the church as one of the ways to reach the community. Last year the donation-based counseling center had 660 appointments. Sixty percent of those came from outside of the church.

“A lot of people we reach are unchurched,” Palaci said. “Many of my friends who grew up in the church here want nothing to do with the church.”

To better reach people who feel more comfortable speaking Spanish, the church started a Spanish-language congregation recently. Palaci and the church’s other teaching pastor preach in both the English and Spanish services.

“We will never plant as many churches that need to be planted if we’re just praying for people to come from the outside,” Peoples said. “It’s hard for people to come from the outside. So, we need to engage people who are already in South Florida, love South Florida and the people of South Florida, the uniqueness of it. There are some wonderful parts of it, but it’s hard as well. When we raise up the people who are already there, they don’t have to learn the culture and other things.”

To find out more about how your church can partner with church planters in South Florida, visit namb.net/send-city/south-florida.