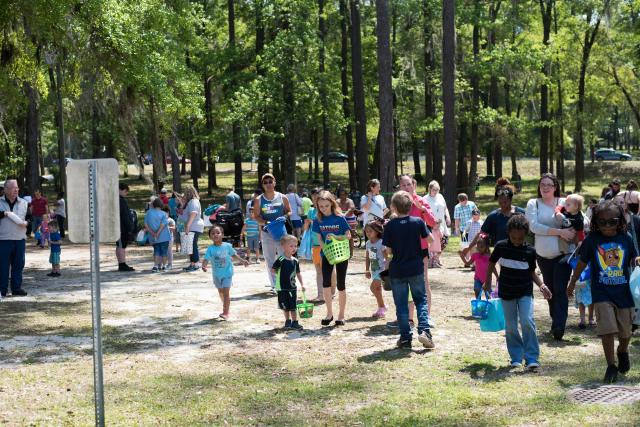 In Scripture the apostle Paul encouraged Timothy to not let anyone look down on him because of his youth but to set an example of godly living for other believers.

It’s a verse 17-year-old Jordan Evans seems to have taken to heart.

Evans, who will be a senior at Bucholz High School this year, decided she wanted to do something to impact her community. She gathered with leaders of her church, Grace Baptist in Gainesville, to brainstorm ideas that could make a difference in the lives of the people around her. Because her church is a strong supporter of the Florida Baptist Children’s Homes (FBCH), Evans decided she wanted to help children in foster care.

From those conversations the Grace Baptist Church Easter Eggstravaganza was born. In addition to a 2,000-egg hunt, children enjoyed bounce houses, relay races, games, music and concessions. To drive the fundraising aspect of the event, Evans incorporated a silent auction.

Evans said she started off with small goals for the event and a fundraising goal of $1,000.00 but the event grew quickly.

“It was a little stressful and scary and delegation really helped,” she said. “I’ve never led a big event before – I had fun with it and enjoyed it.”

Evans said approximately 500 people attended the event and they greatly exceeded their fundraising goal by collecting $6,500. The church presented FBCH with gift cards and a giant check for $2,000 at a dinner ceremony after the event and they plan to give the remainder to the organization in the fall to help children with back-to-school expenses.

As a rising senior, Evans doesn’t know if she’ll have time to do the event again next year even though the church has indicated they would like to. However she plans to leave the framework and reusable items in place for the person who inherits the Eggstravaganza.

Evans could tell she had achieved her goal of impacting her community as she watched the children play and make new friends. But it was an adult she encountered that day that drove that truth home.

“A lady with a small child came up to me crying,” Evans recalled. “She told me her child had been in foster care through FBCH and without events like this and people like us she wouldn’t have her daughter today.”

After fire destroys sanctuary, church finds new vision by linking arms with nearby…