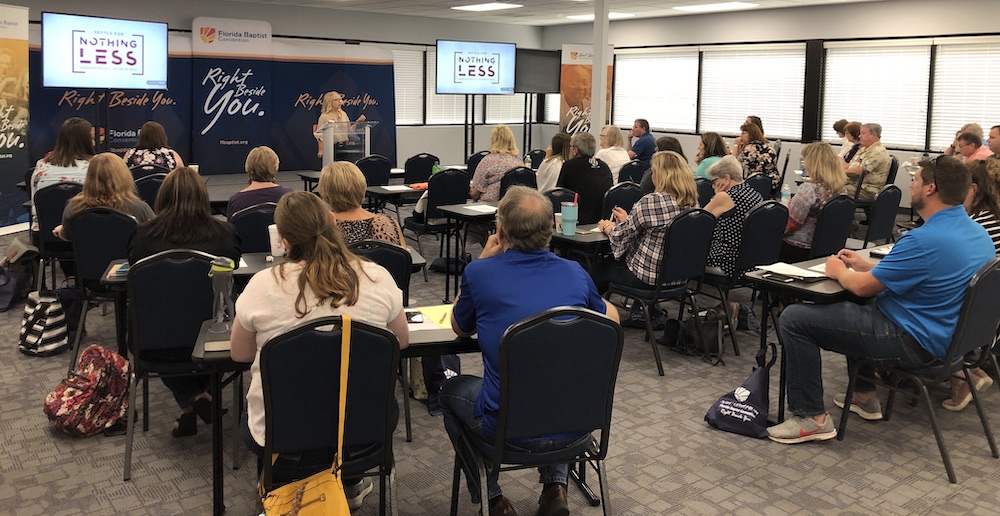 Student and Kid Ministers Encouraged and Equipped at Next Gen Retreats

Jordan Floro, student pastor at Hibernia Baptist Church in Fleming Island, admitted the past few months had taken a toll on him.

“Between a busy summer and walking with families through some difficult things, I was tired and a little worn down,” he said.

But when he attended a Florida Baptist student minister retreat in September, he found a source of renewal and strength he desperately needed.

“Coming to this retreat was such an encouragement to me because I was able to interact with student ministry leaders from across the state,” Floro said. “The messages were the right balance of being practical while also feeding my soul.”

Floro was among a group of Florida Baptist ministry leaders serving children and students from across the state who received encouragement, inspiration and practical insights during two Next Generation retreats held last month.

Each retreat included two days of teaching sessions and times of worship and fellowship.

“The retreat was a great time to not only be connected to other kid’s ministry leaders, but a time of rich encouragement and a reminder of what an honor we have to lead the next generation,” said Mary Eppl, kids director at Central Baptist Church in Sanford. She attended the retreat for childrens ministry for the first time this year.

Jana Magruder, director of LifeWay Kids at Lifeway Christian Resources, and David Anderson, children’s ministry strategist for the Louisiana Baptist Convention, led the time of encouragement and equipping for the kids retreat.

Magruder focused on the emphasis of a family ministry approach while Anderson shared practical insights into kids ministry.

Brooks Beike, children’s pastor at First Baptist Church in Chiefland, said “The kids minister retreat was not a ‘retreat,’ meaning that it helped us move away from focusing on Jesus or ministering to people, but the opposite.

“The retreat helped us move further toward Christ and equipping people.”

The student minister retreat was led by Ben Trueblood, director of Student Ministry for LifeWay, and Brian Baldwin, student ministries specialist at the Baptist General Convention of Oklahoma.

Baldwin’s teaching emphasized the philosophical and practical elements for mobilizing a youth ministry on mission.

As Floro concluded, “It’s great to know I’m not alone in ministry.”

Next year’s kid and student minister retreats are planned for September. For information regarding next year’s retreats and all events from the Next Generation Ministry department go to www.flbaptist.org/nextgen.

Billy Young serves as the Next Generation Ministries Lead Catalyst for the Florida Baptist Convention. With more than fifteen years of experience in student ministry with the local church, he is passionate about seeing students surrender to Jesus’ plan for their lives, partnering with and mentoring next generation ministry leaders, and preaching the Gospel. He holds Bachelors and Master’s degrees in Education from the University of Florida, a Master of Divinity from New Orleans Baptist Theological Seminary, and a Doctorate of Ministry from Southeastern Baptist Theological Seminary. Billy is married to Denise and is blessed to be the father of three daughters. Billy is a fervent fan of the Florida Gators, instilled in him as a backup quarterback of the 1996 National Champion football team. He is an avid sports fan and enjoys punishing himself by participating in triathlons.