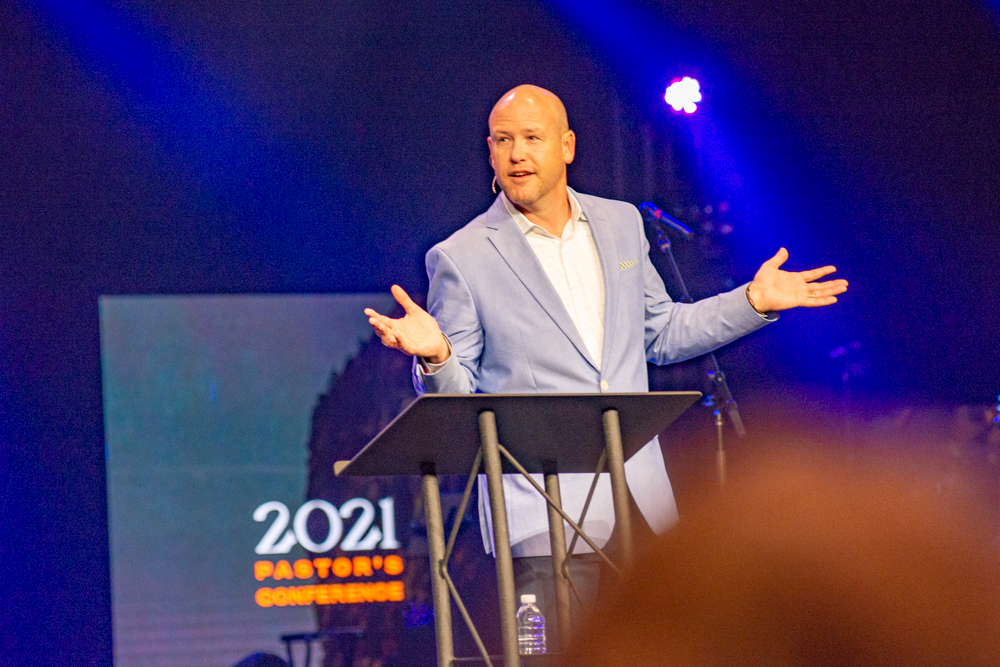 Scroggins: God’s love ‘can hold us together when everything is falling apart’

LAKELAND–In the opening sermon of the 2021 Florida Baptist Pastors’ Conference, Jimmy Scroggins, pastor of Family Church in West Palm Beach, preached, “This world is full of things breaking apart,” and people “are looking for something that is going to hold together.

“That’s what our churches are supposed to be—outposts … that show people how the love of God can hold us together when everything is falling apart.”

Preaching from Acts 6:1-8, Scroggins said that in the first church, “The Holy Spirit taught [early believers] how to hold together when everything else was breaking apart … love each other when the whole world was full of discord … forgive each other and restore one another.”

He described three lessons pastors can learn from the early church.

One, “The Holy Spirit wants you to love an imperfect church,” he said.

Love people who are different

Two, “The Holy Spirit wants you to love people who are different from you,” he said. Acts 6 teaches, he said, that “friction … started when the first church was less than a year old.” In the early church, the Hellenist widows, who were the minority culture, believed they were being mistreated by the Apostles, who were the majority culture.

The neglect, likely unintentional, was “an actual problem” that could have split the church.

“The Apostles recognized that if they failed to model true, genuine, love and inclusivity at church, it would undermine their credibility as a movement and undermine the preaching of the gospel,” Scroggins explained.

Three, “The Holy Spirit wants you to love the mission more than you love your situation,” he said. When the early church movement was “hanging by a thread,” Scroggins said, the Apostles filled “key leadership positions with people from the minority culture, sending “a powerful message to everyone about their commitment to a multiethnic mission and movement.”

The minority culture believers then “had to do their part” and “show genuine sacrificial love” and forgiveness, Scroggins said.

“Then they had to all move forward together.”

Scroggins, a father of eight children, has led Family Church since 2008. Under his leadership, Family Church has grown to a network of 13 neighborhood churches, including nine in English, three in Spanish and one in Portuguese.

In an interview with the 2021 Pastors’ Conference President Cliff Lea prior to his sermon, Scroggins described how his transition to Family Church was challenging, but that “God gave me a sense of what is possible.” Lea, pastor of First Baptist Church in Leesburg, also led Scroggins to discuss his podcast and the recent book he wrote with his wife on parenting.