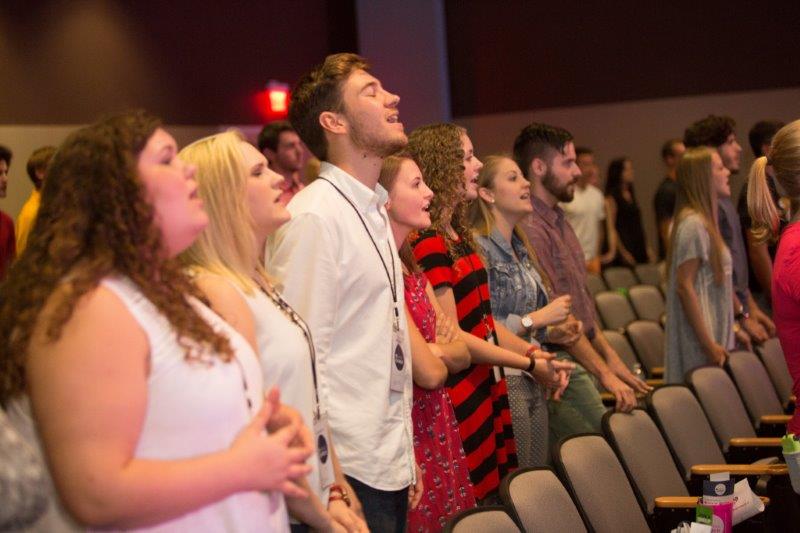 A new, innovative approach to take the claims of Christ to students at Jacksonville’s University of North Florida was implemented with the launch of BCM Campus Church Sept. 13.

With only three percent of the 16,000 students enrolled at the university professing a faith in Jesus Christ, Campus Church is taking the church to the campus through the platform of Baptist Campus Ministries.

“Our goal is to engage students, right where they are,” said Barry Sproles, UNF campus minister, “to help college students grow as disciples and immerse them in a group of believers.”

This pioneering approach to campus ministry makes it easier for Christian students to engage non-Christians students, he added.

Student Raven Hancsak from Melbourne was among the 150 who attended the church’s first service. Although she is a Christian, she had not attended church since arriving at the school. “This is much more convenient since I don’t have a car and live on campus.”

“We are a church focused on the college student,” explained BCM student Kevin Todd of Atlantic Beach. “God opened the door for us to do this. A church on campus can teach God’s word in a way that’s relevant to students.”

While some college students will attend a local church, Todd said, “it is hard to get plugged in and can be intimidating.”

Sproles believes students are challenged to participant fully in a local church while trying to balance the academic and campus life. “We are telling them we want you to plug into one place and focus in one area.”

Campus Church meets Sunday afternoons at the UNF Student Center auditorium and is the only evangelical worship service on campus. In the weeks since the launch, the church has averaged about 75 in attendance.

“It’s been consistent and growing with new faces of college students,” said Sproles, adding that they have seen six professions of faith and two students who want to be baptized.

Sproles is working in partnership with First Baptist Church in Jacksonville, its sending church.

The ministry of BCM Campus Church is funded in part through a $50,000 grant from the Florida Baptist Convention’s church planting assistance, provided to its sending church.

Partnering with the church is Fruit Cove Baptist Church, which is providing its collegiate minister Chadwick Lockley, to build relationships among the students and oversee small groups.