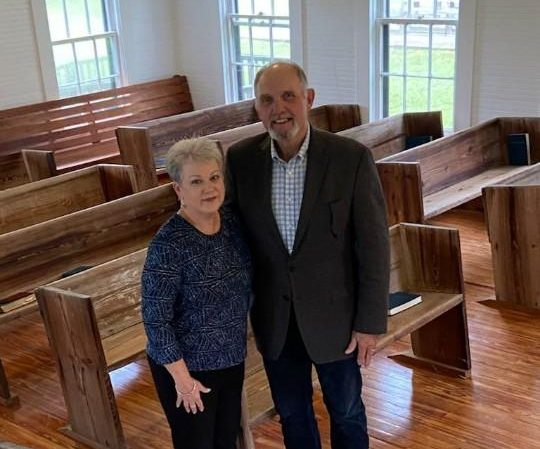 PERRY–When Danny Lundy accepted the call to serve as pastor of Oakland Baptist Church in Perry, the men and women in this homesteader church still sat on separate sides of the sanctuary and there was no air conditioning, only the air coming from open windows and handheld fans.

That was 50 years ago, but as he fondly recalls memories like those and others, Lundy says it doesn’t seem so long ago.

He was only 19 when he became pastor of the church, which was founded in 1875 and meets in an old wooden schoolhouse nestled among oak, pine and cabbage palm trees on five wooded acres in the western part of Taylor County off Hwy 98. A cemetery located on the property serves as a final resting place for many former members.

Because Oakland only gathers once a month, Lundy was always able to lead a second church with a more traditional schedule. And while his first pastorate was at a church in Suwannee County, his other congregations have been in Taylor County where he was born and raised.

“Of course, it was quite different,” he said with a laugh. “I was facing being a pastor to folks that were 70 or 80 years old. They were some of the homesteaders that had originally come into the community.  It was kind of like going back to the old frontier days, honestly.”

For as long as he can remember, the church always celebrated homecoming on the third Sunday in September. This traditional celebration would include swamp cabbage – an old-time Florida vegetable obtained from the heart of the cabbage palm tree – and fried mullet, with a host of other covered dishes brought by attendees.

In all his 50 years as pastor, there had only been one year when it was not held and that was due to a hurricane. But the church has had to skip its homecoming celebration this year and last due to COVID-19.

Some people ask Lundy why the church continues to meet only once a month and what good does it really do. This longtime pastor has an answer.

It’s not just about the monthly church gathering, he says. The church, which is always open to the public, also serves as a testimony to people, reminding them of God and his Word. The cemetery reminds them that death is inevitable.

“The church doors are always open,” he said. “People can sit on benches made when the church was first established back in the log cabin days. The piano is there so they can go in there and sit and play piano. They can pray and sing.  A lot of people go down there to get some solace, just to have a little bit of peace between themselves and the hurries of the world and be able to sit there and talk to the Lord.”

In addition to Oakland, Lundy has served two other local churches during the past 50 years, including Pleasant Grove Baptist, where he is currently pastor, and Midway Baptist, just outside of Perry. He and wife Treva have three children and six grandchildren. She is the keyboardist at Pleasant Grove and has served alongside her husband as pianist at Oakland.

For many years, until his retirement, Lundy also worked a full-time job with the city of Perry’s wastewater division. A bi-vocational pastor friend helped him get that job.

“You see so many connections, preacher to preacher, friend to friend,” he said. “Over the years, if I needed to be somewhere like a funeral or a visit to the hospital, I had some flexibility with my job to be able to do that.  I couldn’t have held down too many other jobs that would give me liberty like that.”

Because he’s so outgoing and easy to talk to, some call Lundy the “community pastor” or “everyone’s pastor.”

“My whole life has been dealing with people,” he said of both his pastoral and city jobs.  “I’ve always found myself needing to be a people person. I’ve always felt like you just need to be yourself and be the same person today as you are tomorrow. That makes people comfortable when they need to see you or talk to you.”

Sometimes people will ask how long the church will go on or how much longer Lundy plans to be its pastor. He’s not really anticipating many changes. He compares the little church in the woods to a lighthouse that continues to shine its light for all to see.

Student Ministers Get a Day of Encouragement and Sharpening