ST. GEORGE, GA–When Matt Rouse stopped to aid a stranded motorist, he had no idea it would almost cost him his life. 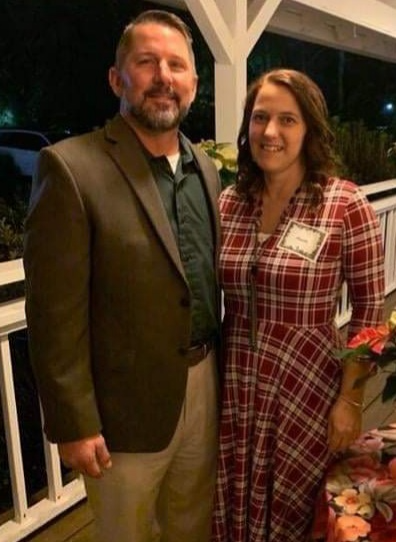 Rouse, the bi-vocational pastor of Moniac Baptist Church in St. George, Ga., was the victim of a carjacking in December that resulted in him being thrown from the back of his truck and left in the middle of the road with life-threatening head injuries.

He credits God for his survival and miraculous recovery from the most harrowing incident of his life.

Moniac Church, located on the Georgia-Florida state line northwest of Jacksonville, was planted by a Florida Baptist church and is a member of Florida Baptists’ Black Creek Association.

After he was thrown from the truck, Rouse suffered a severe concussion, traumatic brain injury, a laceration on his forehead above his right eye and a broken left arm.  He had two subdermal hematomas, or pooled blood, on both sides of his brain.

“For several days it was touch and go and no one really knew how extensive the damage was going to be,” Rouse said. “But then I started talking to them and making sense and passing the little tests they were giving me.”

Within a week, Rouse was sent home to recover. Everyone – from his doctors and nursing staff to his friends and family–were “stunned and amazed” at how well he was recovering. He credits God’s with his miraculous healing.

The incident took place back in early December as the pastor was driving along a two-lane highway on his way to a part-time job. He passed a young woman in a pickup truck stopped in the middle of the highway.

Turning around, Rouse called the local sheriff’s office to report the incident. He gave the license plate number and told the dispatcher he planned to help while they waited for a deputy to arrive.

When he offered to tow her vehicle to a safe spot on the shoulder, she accepted. However, when she asked to be towed to a gas station, he climbed in the back of the truck to get a stronger towing strap and “she jumps in the driver seat, slams the door and slams it into drive and hits the gas,” he said.

Rouse said he held on as she sped away. Looking through the back window, he could see she was driving at 100 miles per hour.

“I don’t think I’ve ever prayed that hard in my life. I’ve been afraid a few times in my life – I served in the military, and I was a state trooper for 16 years – but I can count on one hand the times I’ve been that scared.”

As they reached the next town, she jerked the truck to the left to avoid a car.  When she did, Rouse was thrown out of the truck onto the road. The woman never stopped, but bystanders witnessing the incident stopped to help him and called 911.

Rouse does not remember being thrown from the truck or being flown via helicopter to a Jacksonville hospital. He only remembers waking up in the hospital.

The woman was arrested the same day of the incident near Brunswick, Ga, while running away on foot from officers on I-95. She is in jail awaiting trial on charges including hijacking, kidnapping, auto theft and more.

Rouse said he has no hard feelings against the woman. In fact, he’s asked about visiting her in jail, but officers have not allowed him to have any contact.

When they do allow him, Rouse plans to let her know he forgives her and to try to share the gospel with her, he said. “This is an opportunity for this young lady to know that when we mess up, there is forgiveness.”

He said this type of forgiveness is hard for most people to understand. Some question how a person can be so forgiving.

“We learn it from the Lord because he forgives us. He tells us to forgive others just like he has forgiven us. This is an opportunity for her (the woman) personally to see that and learn about that. And when other people hear about this story, they can learn about it too.”

Rouse began preaching again in late December, but it was March before he was fully recovered and driving again. After passing a series of tests he returned in April to his job as a school bus driver. His left arm was severely broken in two places and had to be reconstructed with metal plates and screws. He’s back to playing his guitar again even though he still has a few issues with his left hand as a result of the nerve damage.

As one might expect, the incident has been woven into several of his sermons these past few months. The story certainly has implications for messages on forgiveness, God’s provision and healing, how fragile life can be and how quickly things can happen.

“Sometimes it’s intentional, where I think about it beforehand as I’m preparing the message and I see where I can work it in there,” he said. “But sometimes while I’m there in the pulpit, I wasn’t even planning on putting it in there, something just hits me while I’m there, and it pops right into the message.”

Pastor of multicultural, multiethnic church to be nominated as FBSC president