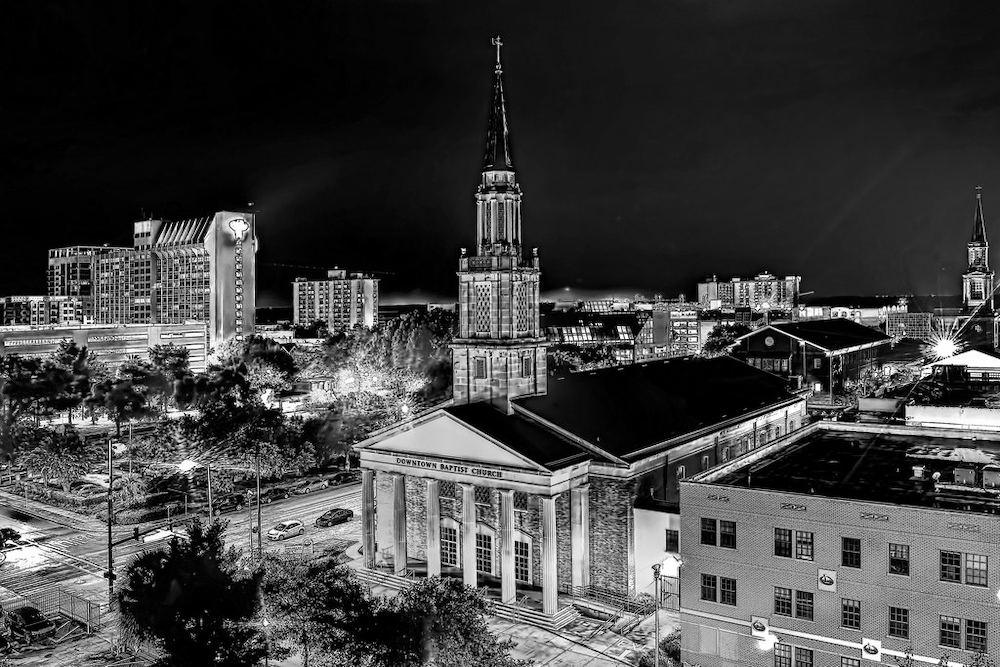 ORLANDO–Some would say the glory days of a bustling, downtown campus are over – but Downtown Baptist Church in Orlando is bringing the ‘glory days’ back to Central Florida.

Located in the heart of the city and sitting in a historic building, Downtown Baptist Orlando has a rich history as First Baptist Church of Orlando dating back to its founding in 1871. In 1977, longtime pastor Jim Henry was called to shepherd the congregation.

Landlocked by its phenomenal growth and looking to expand, in 1985 Henry led half of the church to move to a 140-acre campus off John Young Parkway and half to stay downtown. The members who remained behind at the downtown location formed what is now Downtown Baptist Church.

Following several years of decline and a long-term interim with Henry after he retired, the church called a new pastor in 2019, Scott Shoffner, to reverse the downward trajectory and revitalize this once bustling church. In the words of Henry, the church is poised to become “a tremendous lighthouse for downtown Orlando.”

Now under the leadership of Shoffner, the church has launched a revitalization plan that includes intentionally reaching the next generation of young families living in both the city center and surrounding neighborhoods, and a capital campaign.

“We are a revitalizing church,” Shoffner said. “We are working on growing the church and we are watching God grow His church.”

During the past several years, the church has focused its attention on community outreach and establishing ministries for young families and children. Downtown Baptist, nestled among the city’s burgeoning residential high rises, has increased its visibility and impact beyond its church walls.

“We facilitate a monthly outreach visitation, we partner with local schools to supply physical and spiritual needs, we host our Businesswomen’s Luncheon to reach professional women with the gospel of Jesus,” said Shoffner.

The church has made an intentional effort targeting young mothers, with their newly established ‘Mommy and Me’ ministry.

The church will not only be meeting needs in the community, but also beyond through mission trips and a focus on sharing the love of Jesus wherever church members go. Through his preaching, the pastor also encourages members to share their testimony and be missional in their daily lives.

“By preaching Jesus every week, encouraging the church to take Jesus with them when they leave, and teaching them to share their personal stories of salvation and life with Jesus,” the church has become more missional and focused on the Great Commission, he said.

The Capital Campaign launched in the summer has gained much traction. “We received all $130,000 needed for the four-month campaign in just four weeks,” the pastor said.

When asked what the future of the church looks like, Shoffner shared that reaching the next generation, growing the kingdom of God, and preaching the Word are at the very center.

“A positive future looks like reaching more young families and the next generation with the purpose of reaching downtown Orlando,” he said. “We are looking at adding more staff to reach other areas of ministry, growing the Kingdom of God, and hosting a massive event in 2023.”

With a focus on proclaiming the Word and reaching people, Shoffner shared that the ‘glory days’ of the church are on the horizon.

“We’re going to keep sharing Jesus and taking the gospel out,” he shared. “We are remaining true to the Bible and preaching Jesus.”

A message to Florida Baptist Pastors from Dr. Tommy Green