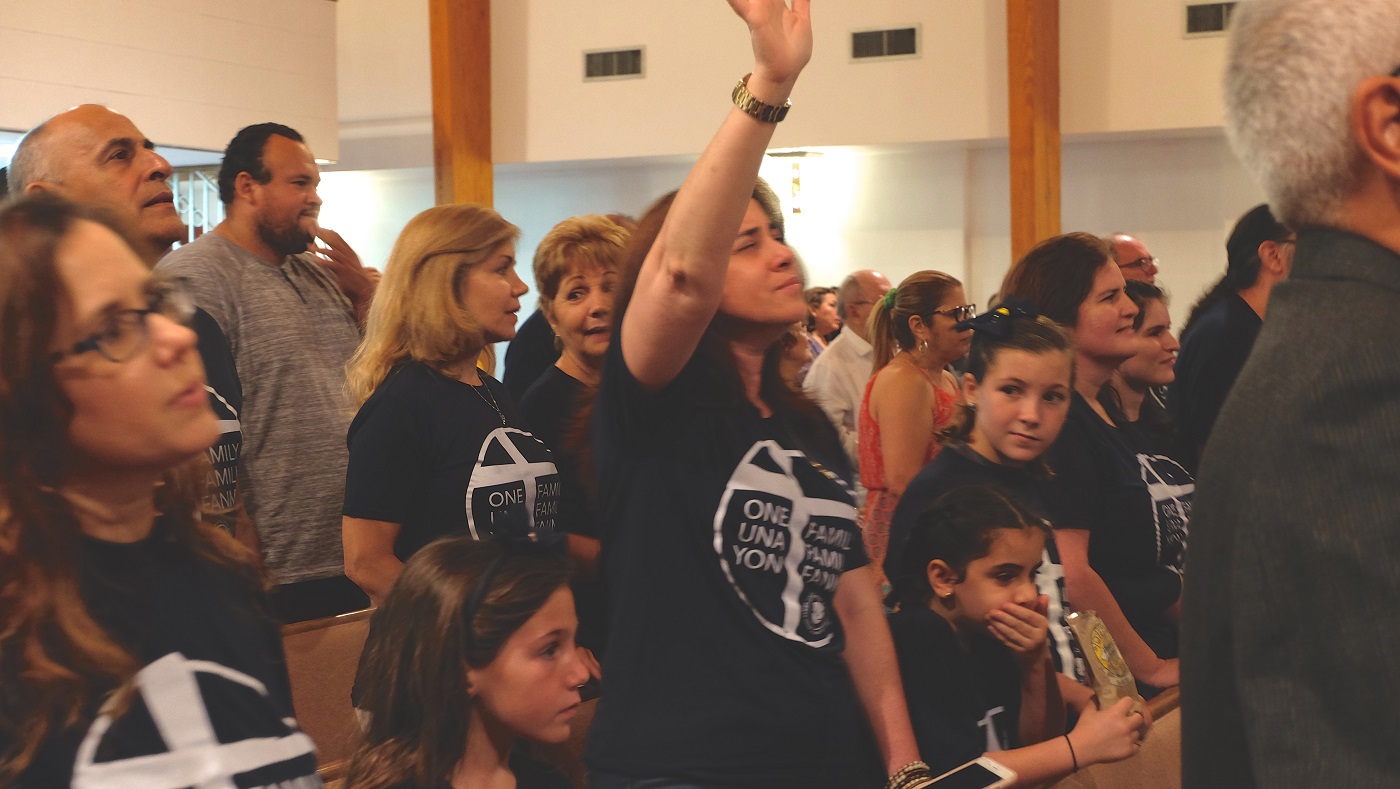 Close to 300 Florida Baptists representing many diverse cultural backgrounds came together as one family on Friday Sept. 28, 2018 to worship at First Baptist Church in Hialeah.

The One Family Worship Event is the second such gathering this year of Florida Baptists in an effort to display and encourage unity among believers.

Tommy Green, executive director-treasurer of the Florida Baptist Convention, was one of three keynote speakers and in addition to preaching on unity he also spoke about some of the steps the Convention has taken to promote unity in Florida.

Green has worked with Convention leaders to encourage the participation and nomination of multicultural leaders in Florida Baptist life. Under his leadership there has been a 20 percent increase of non-Anglo representation on the State Board of Missions.

“As long as I’m in this role I will spend each day working to make sure that we are one family,” Green said.

The evening kicked off with dinner in the Southeast Regional Center’s cafeteria. And while most wore a navy blue t-shirt with the One Family event logo across the front, the cafeteria was a display of diversity as people spoke Spanish, English, Creole and even a combination of the three.

Patrick Coats, Black Multicultural Church Catalyst for the Convention, began the worship service by asking everyone to sit by someone they didn’t know. The room then became a flutter of people switching seats. Some were shy to do so at first, but soon people were greeting and hugging each other and had to be asked to find seats for the service to continue. Emanuel Roque, Hispanic Church Catalyst for the Convention, translated for the preachers and speakers.

Worship groups from Iglesia Bautista Northside, Kingdom Covenant Church, and Turning Point Church led the diverse but united congregation in worship. The sanctuary resounded with songs in English and Spanish. Some sang in the same language along with the worship groups and others sang in their language to the same music.

“I love this display of love and diversity,” said Silvina Gregorich, women’s ministry leader at Iglesia Bautista Northside, a feeling that many expressed throughout the night.

Sherard Burns, pastor of Renewing Life Church, was the first preacher of the evening. Burns read out of Colossians 3: 1-7 and focused his message on battling division among believers. “If you have experienced Christ then live like it. The Gospel is about unity and our unity is a result of Jesus’s sacrifice.”

Noel Lozano, pastor of Turning Point Church, preached a message on love out of 2 Corinthians 5:14 and John 13:35. “We are God’s people, He gave us that name. The world will classify us as conservatives, liberals… But God has called us His people…We have to do away with what divides us,” he said.

Green preached the third and last message. He read out of Ephesians 2:13 and followed it by singing acapella the hymn “Nothing but the Blood of Jesus”. In his three-point message he emphasized that the Gospel is accessible to all; all have been made acceptable because of Jesus’s sacrifice before God the father; and finally, we are all accountable and our responsibility is to love one another. “We are different when we are saved, no longer strangers but fellow citizens, members of the body. Our responsibility is to love one another, to be one. To whom much is given, much is required.”

The evening ended with all believers present sharing in the Lord’s Supper which was administered by Green and passed out among believers by a group of pastors.

Al Fernandez, Southeast Regional Catalyst for the Convention, described what happened that evening saying “we have spoken the language of Heaven tonight.”