Never Too Old: Planting a Refuge in Bunnell

While pastoring in North Carolina, the Lord spoke to David Vannoy through Genesis 35:1, where God told Jacob, “Arise, go up to Bethel, and dwell there…”  Vannoy believed that God was calling him to return to the place of his blessing, which was Flagler County, Florida where he had previously pastored for 18 years. In October 2016, after months of praying and waiting, God opened the door for him and his wife Donna to relocate to Bunnell, county seat of Flagler County. 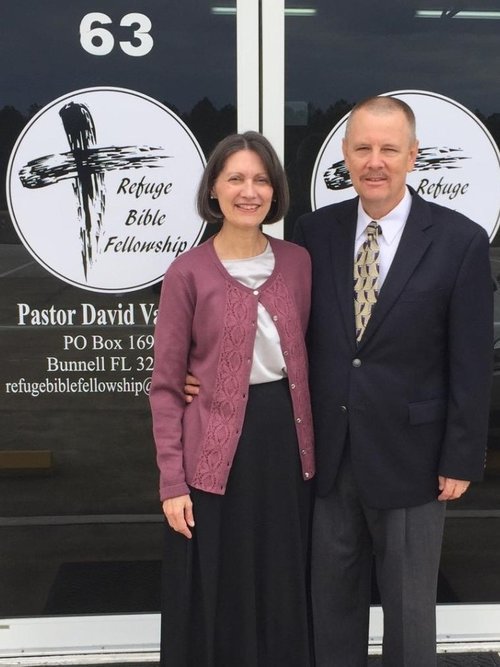 As they sought God’s will through personal and corporate prayer with others, it became clear that God was calling them to start a new church.  “When God starts a new work, He usually calls young people to begin that work. This time He called two older people,” said Pastor Vannoy.

More intercessors joined them and soon God gave a vision, a name for the church, and a place to meet.  They incorporated on Dec. 1, 2016, completed repairs and renovations of the meeting site, and held their first service on Jan. 29, 2017.  Pastor Vannoy praises God that it took 52 days from their incorporation to their first worship service, just as it took Nehemiah 52 days to repair the wall in Jerusalem.  “God will provide if we follow his plan,” he said.

Refuge Bible Fellowship began with a core group of 12 and had 65 people attend their first public service.  They now have a membership of 102.  “The first year was slow evangelistically,” commented Vannoy.  Burdened for young families in their community, attendees made a list of unsaved or unchurched young families that they personally knew, and began praying for them by name during their Wednesday night prayer meeting. During 2018, they saw 18 of the young people they had prayed for come to Christ and 17 were baptized.  Quoting Psalm 118:23, Vannoy exclaimed, “This is the Lord’s doing and it is marvelous in our eyes.”

They now have a good mix of ages attending on Sundays, including a deacon who is 94 years old.  “We need our elders,” said the pastor, “they have lived life and can speak wisdom into our lives.”  And he has found that the older folks are true intercessors.

Their sending church is Ancient City Baptist Church, St. Augustine, and Senior Pastor Fred Pitts says that in more than 30 years of involvement in church planting, he has “rarely met a pastor with as much confidence in hearing God’s voice speaking to him as David.” He adds that, “[Pastor Vannoy] remains humble in pointing to God for bringing about all that has taken place.”

Refuge Bible Fellowship, a member of St. Johns River Baptist Association, has a heart for the people of Bunnell, and Vannoy and his wife count it a privilege to be a part of what God is doing in their church.  “We’re tired, but blessed.  We might wear out but we won’t rust out,” quipped Vannoy. “To God be the glory!”

Planting in Due Season: God’s Blueprint for Ormond Beach

Prev Next
3 Comments
Leave A Reply
Cancel Reply
Follow Us