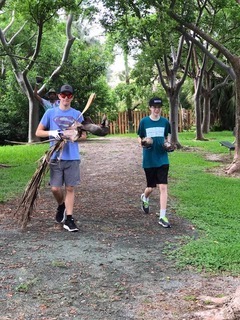 The group of young missionaries came to serve Cross United Church, a church plant in the Deerfield community of South Florida.

“They came and basically told us that they wanted to serve us in whatever made our ministry more fruitful in reaching people in South Florida,” said Danny Slavich, Cross United’s pastor.

The group, which visited South Florida in June, led worship at Cross United for a Sunday service, held a mini concert at a nursing home in the community, hung thousands of door-hanger invites, and even cleaned up trash and debris at the local DeGroff Park. 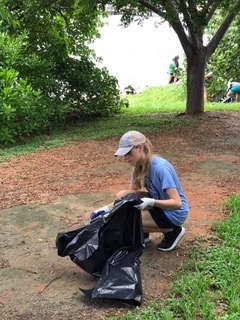 “They came in and cleaned up trash, debris, and really helped us show the city and the community that we are here to serve,” said Slavich.

Slavich added that the missions’ partnership was born out of a connection made last November between himself and Tim Rigdon, Associate Pastor of Music and Church Ministries at North Jacksonville Baptist Church.

“I met pastor Tim from North Jax last November when the Florida Worship Choir and Orchestra came to Miami,” said Slavich. At that time, the Choir and Orchestra raised funds and donated musical equipment to church plants across South Florida. Cross United was one of the churches that received donations. Following this event, Slavich said that Rigdon “told me that the youth choir was going to come down for summer missions and he asked me if he could partner with us and of course we said ‘yes that would be amazing’.”

“It starts with churches having a mindset to serve and be on mission,” said Slavich. “There is a lot of harvest and we are constantly looking for co-laborers…God is faithful to send them as He has been faithful to us.”