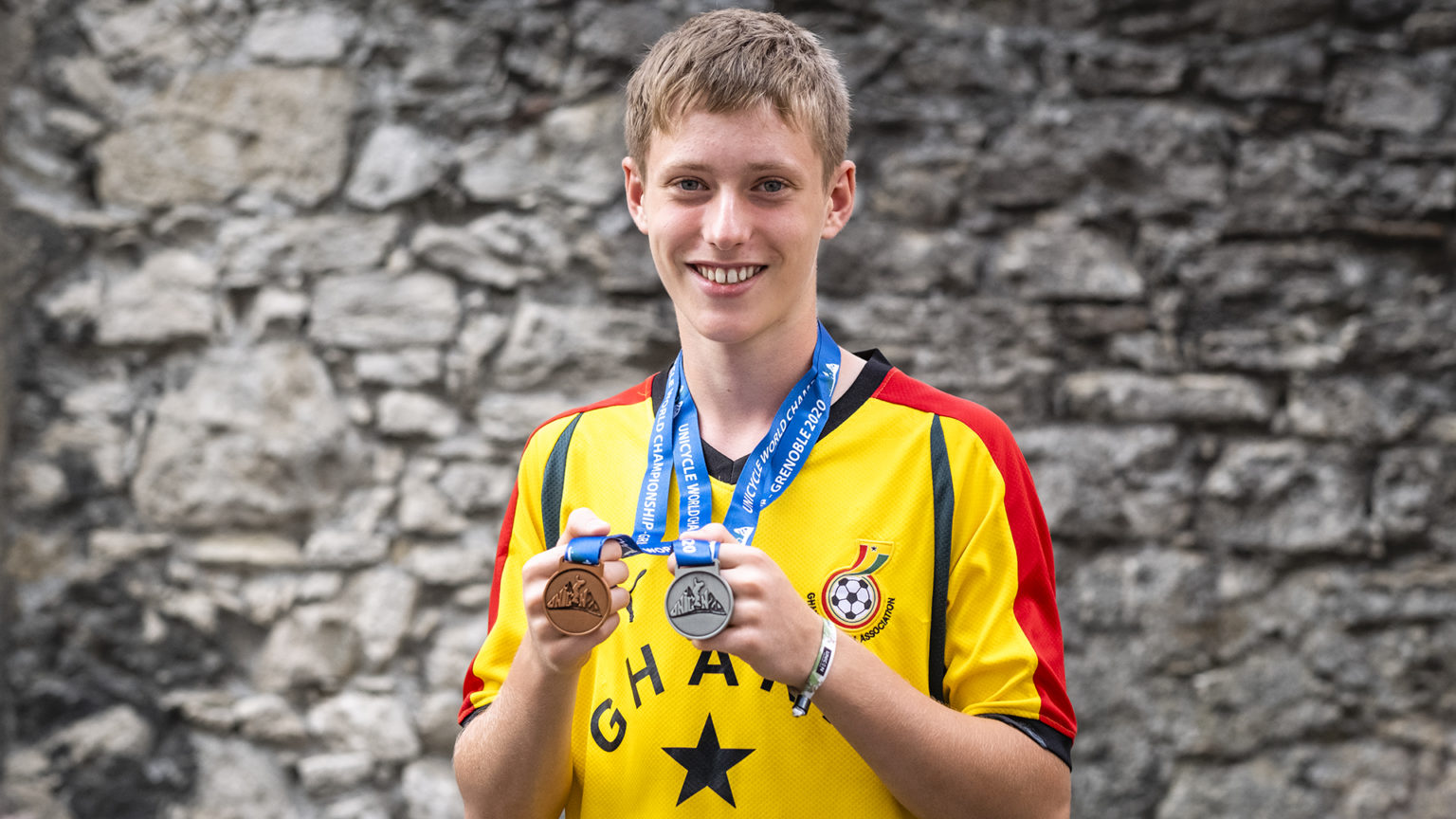 Editor’s Note: Trey Haun, 16-year-old son of International Mission Board missionaries William and Heidi Haun, recently won silver and bronze medals for Ghana at the 2022 Unicycle Convention and World Championship. The Hauns, from Seminole First Baptist Church in Suncoast Baptist Association, have been serving in Ghana for eight years.

The young American stood in the back of the truck as it moved slowly through the streets of Nalerigu, Ghana. Friends gathered along the road held up flags and cheered for the teenager clad in a Ghanaian national shirt. Bystanders called out to see the two medals clanging on Trey Haun’s chest. He held up the silver and bronze, waved and then quickly ducked his head, trying to hide his smile.

The 16-year-old has lived somewhere between embarrassed and excited since the 2022 Unicycle Convention and World Championship ended. Winning the first ever medals for Ghana created not only international media-buzz but guest appearances at celebrations all over Northern Ghana. While the world wanted the story behind an American representing Ghana at an international competition, the Mamprusi community just wanted to celebrate their son, Manboora Trey. 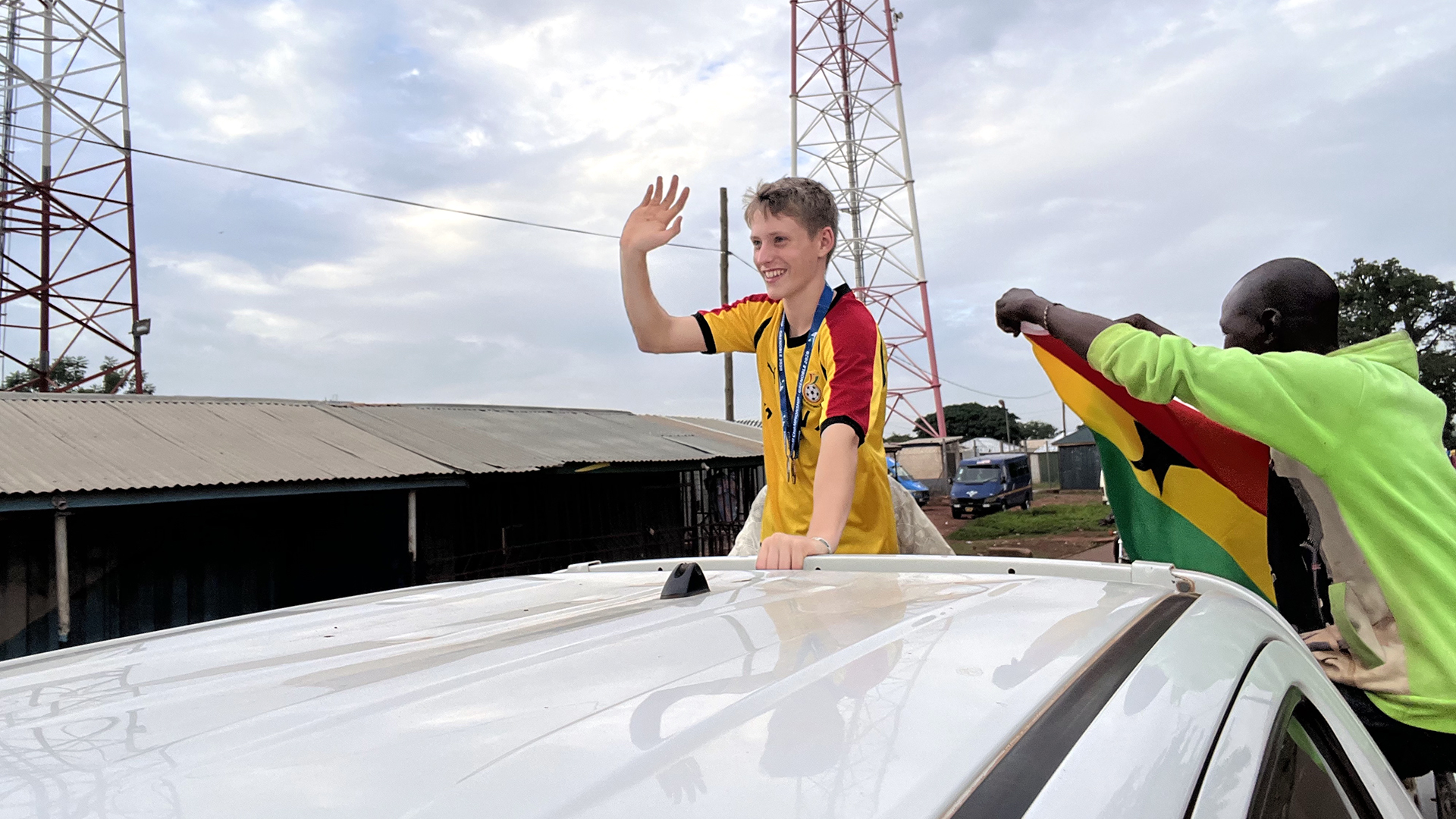 Upon returning home to Nalerigu, Ghana, the community honored Trey Haun’s accomplishments for winning the first-ever medals for Ghana at the Unicycling World Champoinships. The missionary kid chose to represent the country where he has lived most of his life. Trey made guest appearances all over Northern Ghana so the community could celebrate. IMB Photo

Wearing the Ghanaian colors was a no-brainer for Trey. He moved with his parents, International Mission Board missionaries William and Heidi Haun, to Ghana eight years ago. His mom is a surgeon at the Baptist Medical Centre in Nalerigu while his father serves as a multimedia specialist. This rural community is home for Trey. This is where he and his friends roam footpaths through the bush on unicycles or practice tricks learned from YouTube in the courtyard.

“I had a choice to represent my place of birth or my residence,” Trey explained about his application to compete in the 20th world championship. “When I saw there was a chance to represent Ghana, that’s what I chose. Ghana hasn’t been represented before at this convention.”

Ghanaians and other Africans throughout the continent have responded positively to Trey via social media. Even the vice-president of Ghana retweeted a photo of Trey sporting the Ghanaian flag during opening ceremonies of the competition. Most in Africa have never seen a unicycle, let alone heard of an African unicycling team. It’s a unique hobby in any country but even rarer among those in Africa.

Trey first dove into the sport during COVID lockdown a few years ago. The Hauns were visiting the United States back in 2020 when Ghana closed its borders due to the global pandemic. Stuck far from home and with nothing to do, Trey’s dad found a cheap, used unicycle at a pawn shop. Learning to ride became a family affair.

“Trey was the best by far,” William said with a laugh. “Heidi and I were like, ‘We’re old! It’s not worth falling and breaking a wrist.’ But Trey was young and took to it fast, even figuring out how to do tricks.”

The teenager spent hours practicing tricks he found online. By the time the family headed back to Ghana, he was self-taught and beyond hooked on the sport. They managed to pack three unicycles back home. Once William and Trey reassembled the menagerie of parts, the teenager took off to show his friends, Dan and Osman.

The shocked look on Dan and Osman’s faces as Trey balanced on one-wheel was worth the hassle of toting the unicycles halfway around the world. The boys had never seen a one-wheeled bike. When Trey offered to let them ride his, a team was born.

“They were so excited to learn how to ride,” Trey said.

It didn’t take long for the teenagers to lay claim to all three unicycles and take off into the bush, passing fields and villages along narrow paths. On their treks, younger kids ran behind calling out to them. The Mamprusi community was so used to seeing the boys ride that the most attention they garnered from adults might be a wave or a teasing remark.

While the trio liked to hit the open road, their laughter was the loudest when sticking closer to home to practice flatland and street skills. With no one to teach them, they relied on YouTube but also came up with their own versions of tricks, flying off the end of a sidewalk, step or porch with no fear. They learned enough stunts — like flipping the uni from its side to the riding position without using hands — that they began to entertain gathered crowds and even perform at local primary schools.

On the road to silver, bronze

Their skills and love for the sport progressed so much that Trey’s parents did a little research and found UNICON 20. The convention brought unicycle lovers from all over the world for workshops and a World Championship competition from July 26-August 6.

It was too hard to get visas for Dan and Osman to join them in France. And besides, Trey added with a shrug, the local Ghanaian secondary schools were still in session. So, Trey and William promised to record, tweet and WhatsApp live from the event for the Ghanaian teens whenever possible. The father and son combed through the contest events to see what Trey could enter just for the experience of competing. It never occurred to them that the 16-year-old would come home with medals in the 15-16-year-old male category. He earned silver in the 30m wheel walk and bronze in the 50m one foot race. Climbing the French Alps is a big change from riding paths in the bush and escarpments of Ghana. Trey Haun competed in mountain riding events. Top left: Riding straight up a 1km mountain Trey guts it out. Top right: Cyclocross involved a lot of sharp turns and obstacles. Bottom: After a grueling day of competition, Trey lies down and lets exhaustion take over.

Trey explained these were tricks he learned to do early in his riding career. The one-foot race consists of only using one leg to pedal the bike. The wheel walk uses no pedals at all. Riders use their feet on the wheel to balance and propel forward. He also participated in some mountain riding events but did not medal.

“My favorite part about the convention was that the pros hung out and rode with any level of rider,” Trey said. During free time, riders of all ages gathered in a vacant area and showed their tricks to each other. His new friends encouraged the shy teen to show some of his stunts. “Everyone helped each other. It was cool. Everyone cheered for you no matter the skill level.”

That feeling of community only grew at the showing of a short film the father and son made of the Ghana unicycle team. As the video ended with Trey saying his goal for the next world championships was for the entire team (him, Dan and Osman) to compete together, the venue erupted in cheers. Some even donated spare parts and unicycles so the team could grow even bigger.

Since returning from UNICON 20, introducing more Africans to the sport of unicycling has been an almost daily occurrence for Trey. As the teen fulfilled requests by the media for interviews via phone and video stream, he and his dad built and repaired the donated unicycles. A small, white one caught the interest of his 7-year-old sister. She and her friends were always too small to ride until now.

Trey and William took this smallest uni to visit the local primary school. As the proud father hyped his son’s tricks into a loudspeaker, the children cheered and jumped for joy when the teenager elevated his unicycle over a short pole in the courtyard. Then, Trey patiently helped every student take a turn riding the small unicycle.

“Everyone wants to try,” he said. “But I’m trying to find people who are serious and will stay committed enough to join our team.”

Trey, Dan and Osman have their sights set on fielding a Ghanaian team in two years for UNICON 21.