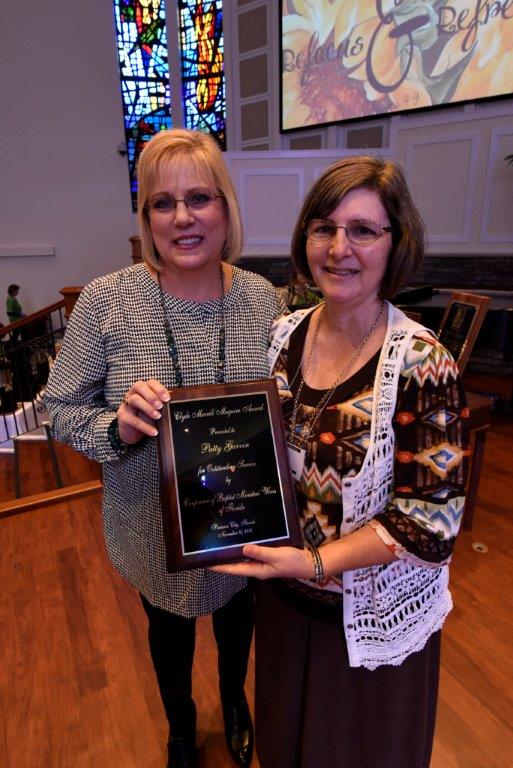 Traylor shared personal experiences from her early days as a pastor’s wife when she learned to rely on God and His power rather than trying to find fulfillment through constant busyness.

“I was doing, doing, doing – hoping God would forgive me for not being the woman He wanted me to be,” she said.

Taking a two-week break from all activities, Traylor began to read the Bible, saying, “”I couldn’t get enough of it.”

Years later, that dedication to spending time reading the Scripture and praying helped her through a particularly difficult experience.

“When you’re focused, you can re-focus, when you’re fresh, you can re-fresh. You can then do anything God wants you to do,” she encouraged the women who had gathered for the luncheon at First Baptist Church of Panama City, in conjunction with the 2015 Florida Baptist annual meeting.

The award is named for the late Clyde Merrill Maguire, whose husband, John, served as executive secretary-treasurer of the Florida Baptist Convention 1945-1967. It recognizes a Florida Baptist woman who has demonstrated faithful use of her God-given gifts in support of her husband’s ministry and in her own ministry. The award was first presented in 1987.

After receiving nominees for the award, the current president of the ministers’ wives conference and the two previous presidents make the final selection of the recipient.

The annual luncheon offers ministers’ wives a “place where they can connect with other ministers’ wives, and we hope that connection will continue through the year,” said Cindy Bradley, who has served as team strategist for Florida Baptists’ WMU/missions education ministries catalyst.